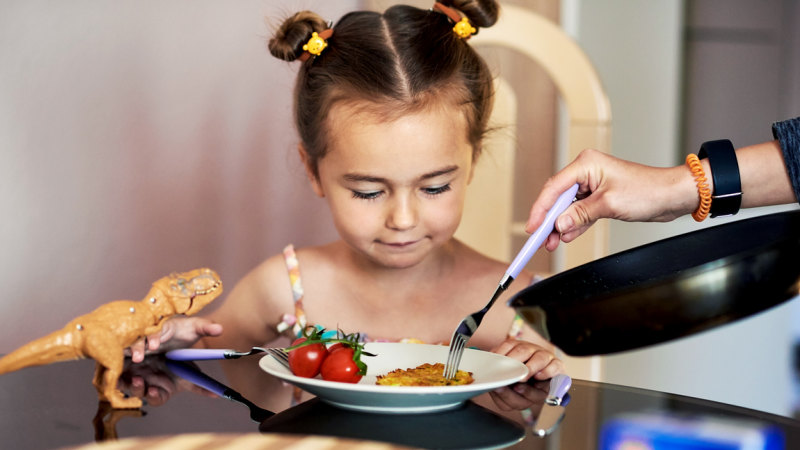 Why I am determined to bring my children up as vegetarians

I am determined to bring my children up as vegetarians. If they ever eat meat, some day in the future, it will be for the first time in their lives. And this is why I think that’s so important.

I wish I had been brought up vegetarian. My mum is vegetarian, my dad isn’t, and so unsurprisingly, I was raised eating meat. Not that much of it – we rarely had it at home – but it was present enough in my diet that I made the conscious decision to become vegetarian myself at the age of six motivated by a love of animals. 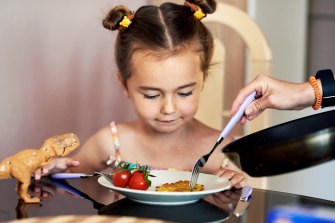 I see it as a great gift that we can give our children to make it second nature for them to make the right choices, if that’s what they want.Credit:iStock

Despite the increasing number of Australians who eat mostly or entirely vegetarian diets (over 12 per cent), we have faced a fair bit of resistance to our choice – even from other vegetarian parents.

The most common objection is the idea we are robbing our kids of choice. This objection came to mind when I heard Joaquin Phoenix’s Oscars acceptance speech: he said, “We fear the idea of personal change because we think that we have to sacrifice something, to give something up.” If vegetarianism is a personal sacrifice, aren’t parents supposed to make sacrifices for their children, not force sacrifices on them?

Well, good parents always limit their children's options, with their best interests in mind. There is a scene in The Simpsons where a baby translation device reveals that a small child has been trying to say “I only want to eat candy!” “Then that’s all you’ll get!” replies the baby’s mother. If my daughter had free choice about what to eat she would have ice cream for dinner. Every night.

It’s not just about health or safety. We care about their moral development. When children first hit or bite each other they don’t – can’t – know what they are doing is wrong – they don’t realise it hurts others. But we stop them and teach them. We raise our children to be good, even though this means restricting their choices.

But, the next objection goes, confining choices to healthy food and socially acceptable behaviour is for the good of your child. Not allowing your children meat isn’t about their welfare, but is aimed at some greater moral goal. I suspect that this is why families who impose dietary restrictions on their children on religious grounds do not appear to be subjected to the same kind of criticism. These parents believe that to eat meat, or pork, or shellfish would harm the child by alienating her from her culture, from her god or gods. That might feel different to imposing vegetarian values about caring for animals and the environment. But it doesn’t feel different to us.

Our vegetarian children will potentially miss out on social institutions – sausage sizzles at school, meat pies at the footy, sausage rolls at birthday parties. Then again, this sacrifice is less than it used to be. Vegetarian alternatives are now nearly ubiquitous.  The number of children with different dietary requirements has also increased due to the steady increase in allergies among children, and as Australia continues to become more multicultural there are more children with religious dietary restrictions.

In some ways we are saving our children from sacrifice. If they never develop a taste for meat, or rely on it in their diets, they never need to struggle to give it up later in life. As more and more people eliminate animals from their diet I can see a day when vegetarianism will become the norm. This will represent a moral struggle for so many, but not for our children, if they choose to stay vegetarian. I see it as a great gift that we can give our children to make it second nature for them to make the right choices, if that’s what they want.

But what if they don’t? I once asked a vegetarian friend whose children eat meat when he would give his kids the choice to be vegetarian and he said when they were old enough to understand what meat was, and where it came from. Our answer is the same – when our kids understand what they would be eating, then it will be their choice to eat it. They will begin to be able to make moral decisions for themselves.

Right now our children are still young (our oldest not yet four), so we keep the explanation of their diet simple. Our daughter knows meat comes from animals, but not how those animals live or die. We say we do not eat meat in our family, and she accepts this, so far, without question. In some families children are not allowed to watch TV at dinner, in others they must help clean up after dinner, and some say a prayer before a meal. Children are given many rules, this is ours, and she cheerfully tells other parents and carers that she is vegetarian, something that she appears to do as naturally as telling them that she is three years old and that she has two baby brothers. We don’t want her to be anxious or sad around others who eat meat, nor do we want her to challenge them. And she does not.

Even if being different can be hard, it has never been easier to be different. Being different also gives us something to bond over. My daughter gets excited when she meets other vegetarian children and adults. Twenty-seven years after giving up meat, I still get excited when I discover that new friends are vegetarian. Given the way the world is heading, when our children are adults they may well not be the different ones, but rather the norm.

Review of evidence finds excessive smartphone, social media use may be linked to youth mental health

What We Get Wrong About Happiness, According To A Real Happiness Professor
Recent Posts