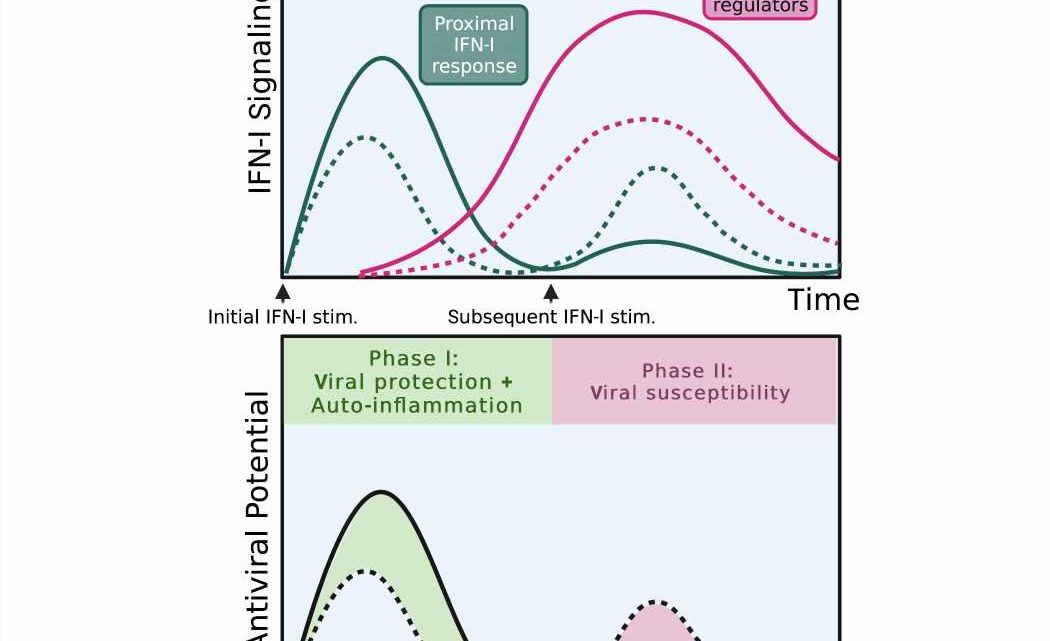 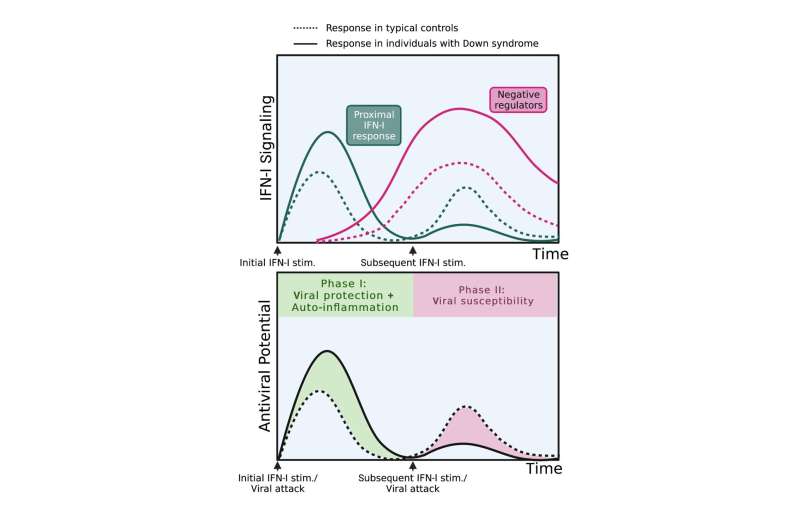 Individuals with Down syndrome have less-frequent viral infections, but when present, these infections lead to more severe disease. New findings publishing on October 14 in the journal Immunity show that this is caused by increased expression of an antiviral cytokine type I interferon (IFN-I), which is partially coded for by chromosome 21. Elevated IFN-I levels lead to hyperactivity of the immune response initially, but the body overcorrects for this to reduce inflammation, leading to increased vulnerability later in the viral attack.

“Usually too much inflammation means autoimmune disease, and immune suppression usually means susceptibility to infections,” says senior study author Dusan Bogunovic of the Icahn School of Medicine at Mount Sinai. “What is unusual is that individuals with Down syndrome are both inflamed and immunosuppressed, a paradox of sorts. Here, we discovered how this is possible.”

Recently, it has become clear that atypical antiviral responses are another important feature of Down syndrome. Increased rates of hospitalization of people with Down syndrome have been documented for influenza A virus, respiratory syncytial virus, and severe acute respiratory syndrome due to coronavirus (SARS-CoV-2) infections.

While people with Down syndrome show clear signs of immune disturbance, it has yet to be elucidated how a supernumerary chromosome 21 leads to dysregulation of viral defenses. To address this knowledge gap, the researchers compared fibroblasts and white blood cells derived from individuals with and without Down syndrome, at both the mRNA and protein levels. They focused on the potent antiviral cytokine IFN-I receptor subunits IFNAR1 and IFNAR2, which are located on chromosome 21.

The researchers found that increased IFNAR2 expression was sufficient for the hypersensitivity to IFN-I observed in Down syndrome, independent of trisomy 21. But subsequently, the hyper-active IFN-I signaling cascade triggered excessive negative feedback via a protein called USP18, which is a potent IFNAR negative regulator. This process, in turn, suppressed further responses to IFN-I and antiviral responses. Taken together, the findings unveil oscillations of hyper- and hypo-responses to IFN-I in Down syndrome, predisposing to both lower incidence of viral disease and increased infection-related morbidity and mortality.

How the Pandemic Let Some Patients Breathe Easier