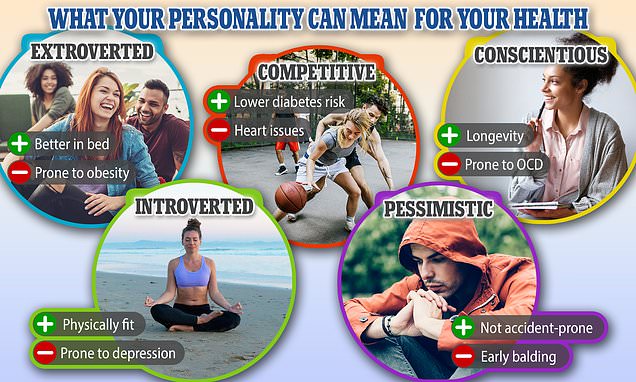 Type A's at risk of heart disease, extroverts will end up obese

What YOUR personality type means for your health: Type A personalities are at risk of heart disease – while extroverts better in bed, but more likely to end up obese

Your personality can have massive impact on your health, affecting everything from your heart, to the amount of hair on your head – and even your weight.

Multiple studies from across the world have found links between particular personality traits and both positive and negative health outcomes.

There is no ‘perfect’ personality either, with every trait both having its benefits and drawbacks.

A person who is extroverted, for example, is likely better in the bedroom than their less-outgoing peers – while also having an increased risk of developing obesity.

Meanwhile, an introvert might not develop obesity, but does have more of a risk of suffering from depression during their life.

Experts say that personality affects behaviors and habits that greatly impact someone’s health. A person’s personality also affects how their body hormonally reacts to situations – which affects the entire body.

Some people are more likely to experience stress which has major ramifications across the body’s internal symptoms as well. 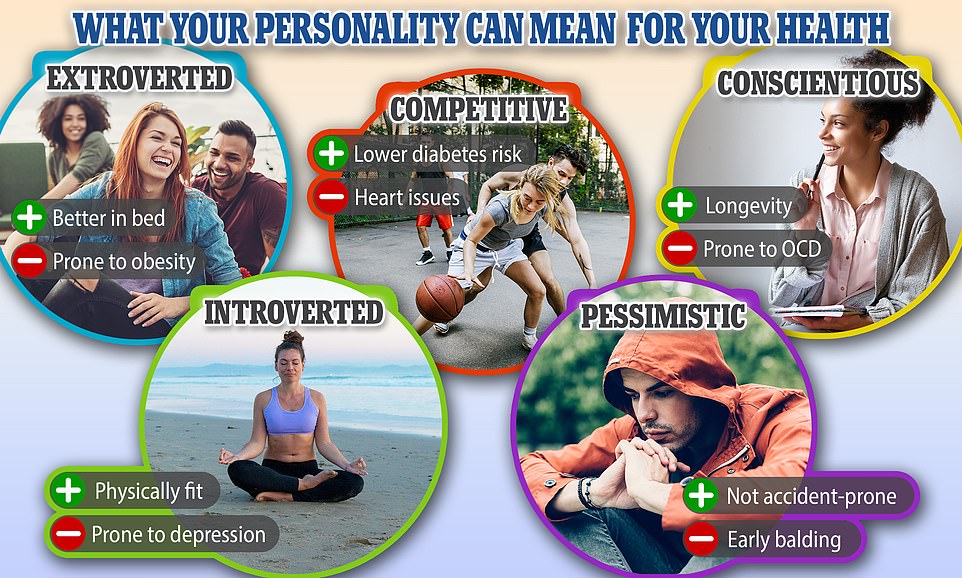 Extroverts are bigger… but also better in bed

Outgoing and expressive extroverts are known to be the life party, but their habits also put them at a higher risk of developing obesity.

A 2019 study by German researchers gathered data from nearly 20,000 people on both their personality type and body mass index (BMI).

Being an extrovert is one of the ‘big five’ personality traits – alongside, agreeableness, neuroticism, conscientiousness and openness.

Extroversion, along with neuroticism, correlated the highest with rates of obesity.

Researchers explain that this is likely because of a more outgoing, agreeable, personality being more likely to eat snacks and take part in other activities that would lead to them becoming obese.

‘Body weight, in turn, reflects our behaviors and lifestyle and contributes to the way we perceive ourselves and others,’ a National Institutes of Health research team wrote in 2012 in a study that had similar findings.

‘Participants higher on Neuroticism or Extraversion… had higher BMI; these associations replicated across body fat, waist, and hip circumference,’ they continued.

While they may struggle with their weight, extroverts can excel in the bedroom.

Another German study of the big five personality traits, this one published earlier this year, found that extroverts where among the best personalities at providing pleasure for themselves and their partner.

The team performed a meta-analysis on eight other studies gauging both sexual performance and partner loyalty across the traits.

Extroverts were found to be great at sex, but not quite the most loyal bunch.

‘Personality not only shapes a person’s preferences for sex,’ researchers explained.

‘It also shapes a person’s behavior in a sexual relationship. This behavior has an influence on the quality and quantity of sex and, hence, on the sexual well-being of the person and his or her partner.

‘Personality shapes sexual communication and information sharing, the way dissonant sexual preferences of the partners are handled, and the extent to which the person is committed to promises made to their partner.’

They went on to add: ‘While extraversion and openness to experience help realize a mutually beneficial sex life, we find no evidence that they have a commitment value.’

The commitment value highlighted how emotionally committed a person had to be to their partner in order to have quality sex with them.

Being competitive can fend off diabetes but hurt your heart

Some people embrace competition, and look for it in nearly every single aspect of their lives.

These people are often referred to as ‘Type A’ personalities, and while their competitive nature can be beneficial to them in the workplace and in other parts of life – it can harm their hearts.

Cardiovascular experts and physiologists have long warned that those who are too competitive in day-to-day lives are causing themselves more stress.

This is often because these people often try to take on multiple tasks at one, have poorer emotional control and will rush to meet the many demands they take on as a result of their personality. 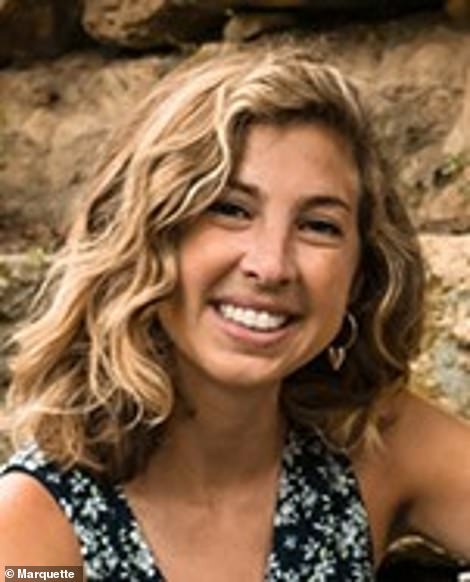 Dr Rachel Bollaert (pictured), a physiologist at Marquette University, warns that type A personalities are at a higher risk of a multitude of heart issues as a result of their increased stress levels

Dr Rachel Bollaert, a physiologist at Marquette University in Milwaukee, Wisconsin, explained that this can lead to multiple heart issues down the line.

‘In those that have the Type A, typically we see individuals having higher rates of potentially chronic diseases like heart disease, or coronary already artery disease,’ she said.

She went on to explain that the same factors that activate stress also are linked to increased rates of heart conditions.

The American Heart Association warns that increased stress causes a person to suffer higher blood pressure – which leads to the greater chronic issues down the line.

Type A personalities are found to be able to avoid diabetes at higher rates than their peers of other types.

A 2021 study from French researchers found that people reporting significant symptoms, foot ulcers, related to type 2 diabetes were less likely to be of the more competitive personality.

While an exact mechanism explaining why these personality differences exist could not be determined by the research, but they believe it could be related to their likelihood to adhere to certain care.

‘Type B personality is much more prevalent in such patients,’ they explained.

‘It may be that the Type B personality, which is characterized by fewer problem-focused coping strategies and a decreased adherence to care.’

People who are hard working, organized and detail-oriented generally have the best health.

Conscientiousness is considered to be one of the five major personality traits. It is associated with people who have greater self-control and self-discipline.

These are great traits to have for someone who wants to live a long and healthy life. Studies have linked conscientious personality types to healthier eating and more physical activity.

Others have linked it to the avoidance of poor behaviors like smoking or excess alcohol consumption.

All of these factors significantly decrease a person’s risk of suffering multiple health problems, like cancer, heart disease, diabetes and more.

What are the five personality traits?

There are five major personality traits recognized by psychologists and other health experts worldwide. These traits each represent a range between two extremes, and each person’s overall personality is a combination of where they fall between the extremes within each trait.

A 2019 study performed by a Swiss research team found that people with conscientious-type personalities had lower levels of IL-6 biomarkers circulating throughout their body.

The research gathered data from over 2,000 men between the ages of 40 and 82 years old, gauging both their personality and their IL-6 levels.

It is believed that this means their overall risk of all-cause mortality is significantly reduced compared to their peers within the other four types.

‘Conscientiousness seems to be inversely related to chronic low-grade inflammation as measured by IL-6 levels, compatible with protection from the cardiovascular risk,’ researchers wrote.

The intense perfectionism and thoroughness exhibited by some conscientious people can sometimes go too far, though.

The personality trait has been linked to obsessive compulsive personality disorder, a potentially debilitating condition in most serious cases.

‘The main characteristics of the obsessive-compulsive personality disorder (OCPD) are conscientiousness, perfectionism, conformism, and devotedness to work, which can be overvalued to the point of adversely affecting professional productivity and interpersonal relationships,’ experts wrote in a 2001 edition of the  International Encyclopedia of the Social & Behavioral Sciences.

‘They dislike teamwork or delegating tasks unless the others conform exactly to their way of thinking or acting.

‘These persons show a severity and rigidity both with themselves and with others which often interferes with social functioning. They are overconscientious, inflexible, and rule-minded about matters of morality or ethics.’

Around two per cent of Americans are suffering from OCPD or obsessive compulsive disorder (OCD) – with men twice as likely as women to be diagnosed.

Introverts, which make up the other estimated half of the population alongside extroverts, are more likely to keep to themselves.

They are also more likely to be physically fit than others. Introverts have lower rates of obesity than their more outgoing peers.

The earlier 2021 study that linked extroversion to obesity also found that those who scored lower on the scale were less likely to be severely overweight.

A 2013 study from Cornell University found that introverted students were better at gauging proper portion sizes than their extroverted peers – leading to healthier habits and less overeating.

Lower obesity rates are linked to less of a risk of developing heart disease, diabetes, many types of cancers and a slew of other health issues.

The mechanism as for why introverts are less likely to be obese could not be determined but the Cornell researchers believed it could be related to the types of social cues they perceive.

For example, in their study the introverted students were more likely to abide by the standard portion size of the bowl they poured cereal into – while extroverts used their own internal, and incorrect, judgement.

While they may be more physically fit, introverts are more likely to suffer mental health issues than their extroverted peers.

A 2001 University of North Carolina study found that introverts are more likely to be neurotic – displaying lower emotional stability and sensitivity towards others.

This leads to increased risks of suffering from depression.

Introverts are also less likely to be social and to be regularly surrounded by others. These are also factors that usually drop a person’s risk of suffering from depression.

Mental health issues can also have a reverse affect, making a potentially-extroverted person who is dealing with depression or anxiety more likely to become introverted as a result of their struggles.

Pessimism is not usually considered to be a very good personality trait. The negative views on the world are linked to higher risks of anxiety, depression and more stress – along with all the negative health risks associated.

A negative purview can also cause a man to lose his hair earlier in life, studies have found.

An old study from researchers in Tokyo, Japan, found that men who reported more pessimism about the future were more likely to have a receding hair line or thinning found around their head.

Researchers did not determine a mechanism, though. While stress is linked to some hair loss, it is not tied to the male pattern baldness that the Japanese research team was looking for.

There is also a chance that it is being caused by a reverse affect. Someone who is losing their hair earlier than their peers may have a worse view of the future ahead.

Researchers also noted that hair loss was more common among people that were overweight, smoked, drank more alcohol and had worse diets.

A more pessimistic outlook may have some benefits, though. They are often more cautious in life – as they fear the worse when making decisions.

As a result, studies find that they are often more prepared for disaster and other negative scenarios others may not be prepared for.

They are also less likely to be injured or die in accidents because they show more caution in their day-to-day lives on average.