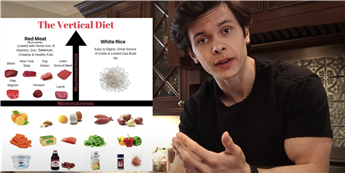 This Unexpected Thing Happened When One Guy Tried the Vertical Diet

YouTuber Will Tennyson is back again with another diet review. This time, the fitness buff challenged himself to try the Vertical Diet for seven days.

Before getting into the video, it’s helpful to know more about the eating style. Bodybuilder Stan Efferding created the diet to improve energy, gut health, stamina, endurance, and recovery, according to Efferding’s website. Under this plan, you’ll eat a lot of red meat and white rice. Brown rice, wheat-based whole-grain foods, beans, legumes, and sugar are not allowed, reported Women’s Health. The Vertical Diet includes low FODMAP foods, like broccoli, that can cause bloating and gas. However, there is no scientific evidence backing the diet’s claims.

And following the plan can be costly, explains Tennyson.

“Let me tell you right now, this is not a budget-friendly diet,” he says. He spent nearly $100 on three days of groceries, which included lamb sausages, lean ground beef, and flank steak.

Throughout the week, Tennyson frequently eats one of Efferding’s favorite meals called the Monster Mash, made of white rice, ground beef, and chicken stock.

At the end of the week, Tennyson had a few surprising benefits: smoother skin and more regular bowel movements. He also feels better overall from sticking to a regular sleeping schedule, which Efferding encourages. Tennyson also lost .4 pounds, which he says is surprising considering he ate more daily calories than normal. Of course, weight fluctuates day by day and depends on a variety of factors including bowel movements and bloating.

Inhaled remdesivir may allow COVID-19 patients to be treated at home
Recent Posts
We and our partners use cookies on this site to improve our service, perform analytics, personalize advertising, measure advertising performance, and remember website preferences.Ok