A Texas judge has denied a family’s request for a temporary injunction in the case involving their 11-month-old daughter, who has been hospitalized since birth at Cook Children’s Medical Center, opening the door for doctors to remove the baby from life support.

Tinslee Lewis was born with Ebstein’s anomaly and has been in the hospital since her February birth. Ebstein anomaly, according to Cincinnati Children’s Hospital, is an abnormality in the tricuspid valve, which separates the right atrium from the right ventricle, and affects normal blood flow. In some cases, the disorder can cause the right atrium to swell, or “even cause congestive heart failure.” For Tinslee, it has caused additional health issues resulting in chronic lung disease and chronic pulmonary hypertension, according to Fox 7 Austin.

However, in the latest ruling in the monthslong court battle, judge Sandee Bryan Marion sided with the hospital and said that a request for a temporary injunction filed by Trinity Lewis, the girl's mother, was “denied,” acknowledging in her decision the hospital’s pledge to keep the girl on life support for an additional week so that the family could appeal the decision.

“During the hearing, defendant announced in open court that it would take no action to withdraw life-sustaining treatment from Tinslee Lewis for a period of seven days from the date of this court’s order to allow plaintiffs to file a notice of appeal and a motion for emergency relief with the appropriate court of appeals, and it is so ordered,” Marion said in the ruling.

The girl’s case first came to light in November after the family was first granted a temporary restraining order by a different judge that prevented the hospital from removing the then-9-month-old from life support. That judge, Tarrant County Juvenile Court Judge Alex Kim, was then removed from the case after the hospital filed a motion questioning his impartiality and saying he had bypassed case-assignment rules to designate himself as the presiding judge. In December, Marion took on the case and said she would allow more time for Trinity Lewis to seek alternative care for her child before issuing a new ruling on Jan. 2.

Her care team at Cook Children’s Medical Center has argued that her condition will not improve despite the several surgeries she has already been subject to, but her family argues that with more time she will recover.

“I want to be the one to make the decision for her,” Trinity Lewis said, about removing her daughter from life support.

Under the Texas Advance Directives Act, the hospital is allowed to withdraw life-sustaining treatment 10 days after determining a patient is in an “irreversible condition.” On Oct. 31, the hospital informed the family of their decision, setting off the current back-and-forth court battle. 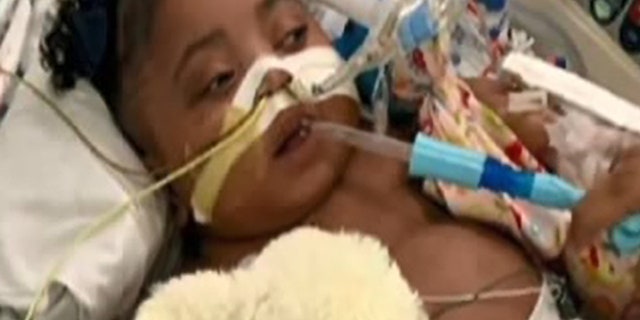 Tinslee has been hospitalized since her birth in February.
(Texas Right to Life Handout)

The hospital explained in a statement that they had already taken several steps in attempting to find another care center willing to take Tinslee on as a patient, but had no success despite contracting as many as 20 facilities.

“Tinslee Lewis is a beautiful baby who has captured the hearts of many at Cook Children’s since her premature birth nine months ago,” a statement from the Cook Children’s hospital said, according to CBS DFW.

“In the last several months, it’s become apparent her health will never improve,” the statement continued. “Despite our best efforts, her condition is irreversible, meaning it will never be cured or eliminated. Without life-sustaining treatment, her condition is fatal. But more importantly, her physicians believe she is suffering.”

“To maintain the delicate balance necessary to sustain Tinslee’s life, and to prevent her from pulling out the lines that are connected to the ventilator, doctors have had to keep her constantly paralyzed and sedated,” the statement said. “While Tinslee may sometimes appear alert and moving, her movements are the result of being weaned off of the paralyzing drugs. We believe Tinslee is reacting in pain when she’s not sedated and paralyzed.”

The family has seen much support from Right-to-Life groups in Texas and beyond, including two non-profits who reportedly say at least two medical centers were reviewing the case to see if they could take Tinslee on as a patient, according to CBSDFW.com.

The Associated Press contributed to this report.

Hospitals across US investing in real estate to help with homelessness, mental health