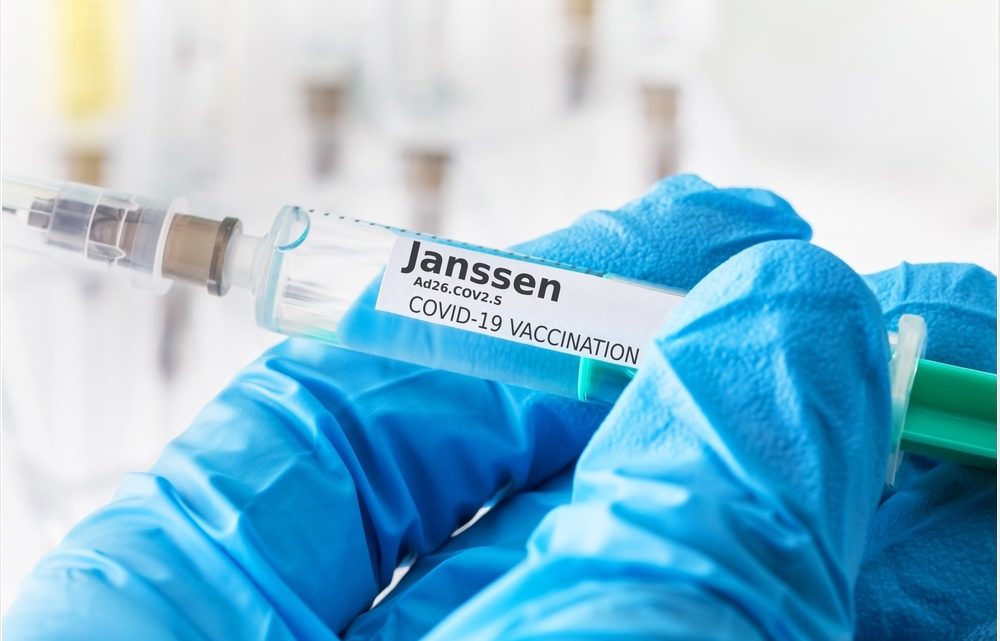 A new study published on the preprint server medRxiv* adds to the data on the optimum interval between the first and second doses of the adenovirus vectored coronavirus disease 2019 (COVID-19) vaccine produced against the spike antigen of the severe acute respiratory syndrome coronavirus 2 (SARS-CoV-2). 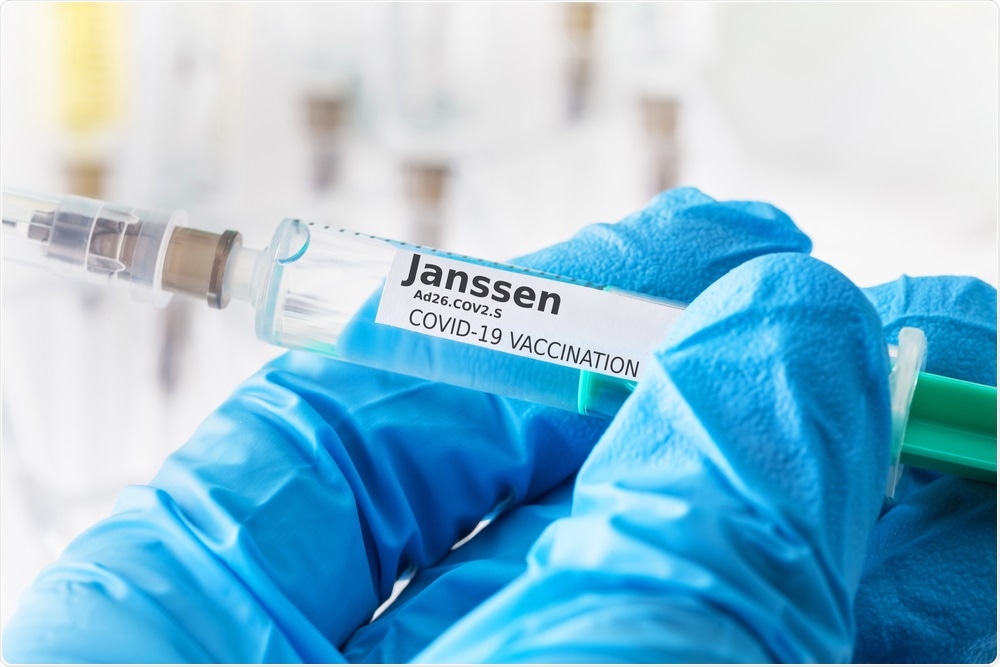 Several vaccines were released during the early part of 2020, many of which were developed on different platforms. One notable technology that was used to develop some of these vaccines includes messenger ribonucleic acid (mRNA) technology, which encodes the immunodominant spike antigen for translation inside the host cell. Another platform that was used to develop these vaccines includes the adenovirus vector, which introduces the vaccine spike antigen into the host cell.

Among these, the Janssen COVID-19 vaccine is an adenovirus vector vaccine. With a single dose regimen, this vaccine has shown itself to be immunogenic and capable of eliciting a protective response against severe and critical COVID-19, as well as against hospitalization and death. Like the other vaccines, the immune response to the Janssen vaccine appears to wane with time, thus increasing the chance of breakthrough infections.

The reasons for this reduction in protection over time may be declining antibody titers or a poor memory cell response, the latter of which may prevent anamnestic immune responses when re-exposed to the virus. Follow-up studies are needed to understand how durable such immunity is, and whether a booster dose is needed to increase antibody titers above the protective level or induce a stronger immune memory response.

The last 12 months have also seen the rapid emergence of successive highly transmissible and sometimes more virulent variants of SARS-CoV-2 that resist neutralization by antibodies to earlier variants, induced by either vaccination or natural infection. These variants, therefore, pose a formidable risk to virus control, especially when antibody levels are low.

The current study reports on the results of a Phase1/2a and Phase 2 clinical study on individuals aged either 18-55 years or 65 years and above. The aim of the study was to assess how long neutralizing activity would last after a single dose of the Janssen COVID-19 vaccine. The researchers also explored what would happen with a booster dose of the same vaccine at six months from the priming dose.

Thirdly, the researchers evaluated the impact of a lower dose of the vaccine as a six-month booster that was reduced four-fold from the priming dose. In doing so, the authors looked to evaluate the strength of the anamnestic response after a single dose in adults in these two age groups.

Earlier research by the same team of scientists demonstrated that a single dose was immunogenic. In the current study, neutralizing antibodies in the 18-55 year age group were found to be detectable for eight months, with the geometric mean titer (GMT) of the antibodies being 226 in almost every participant. This is highly comparable to the GMT on day 29 post-vaccination. 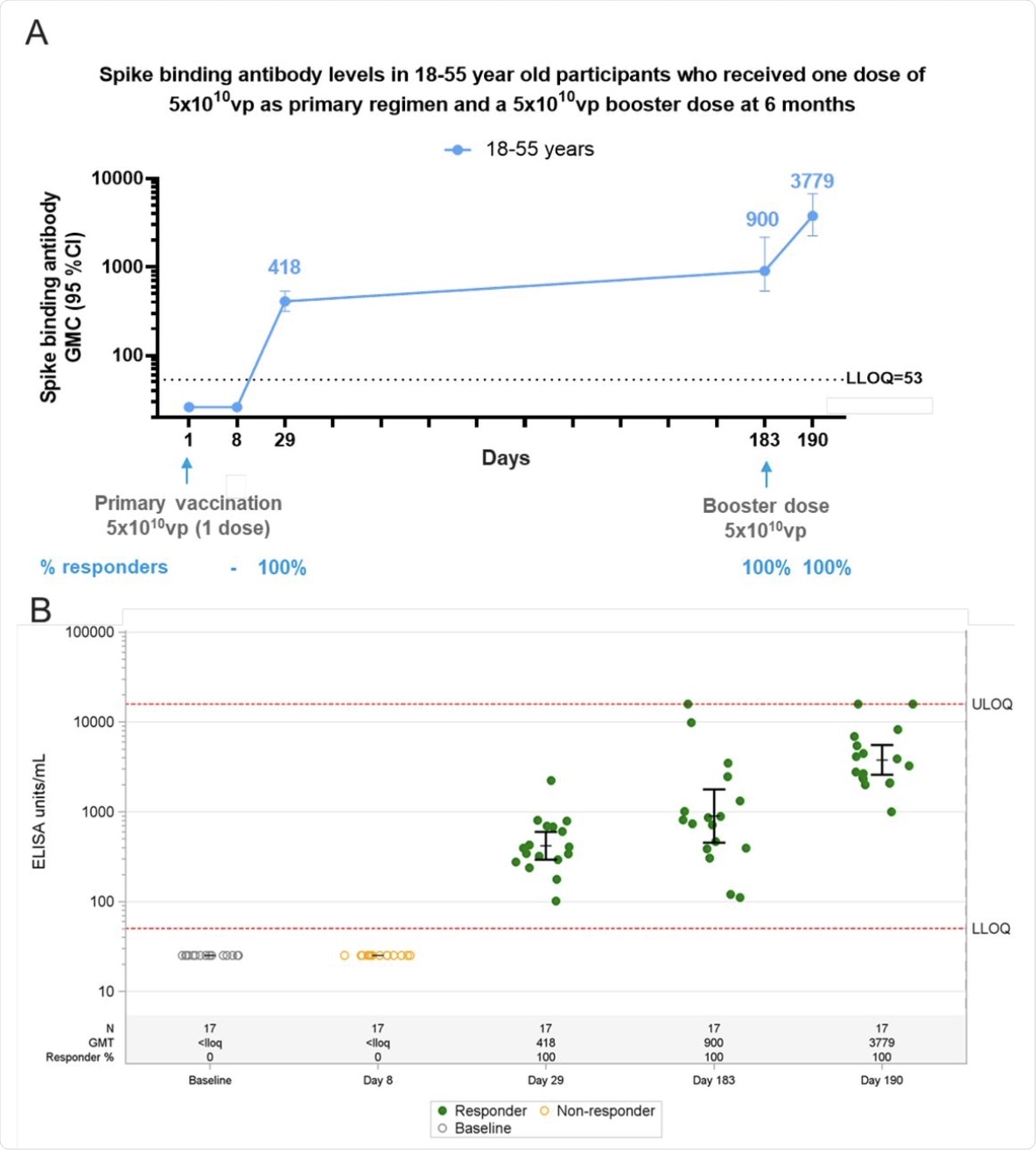 Phase 1 participants, age 18–55 (N=27) years of age, were administered a single dose of Ad26.COV2.S (5×1010 vp) at Day 1 and 20 participants received a booster dose of Ad26.COV2.S (5×1010 vp) at approximately 6 months (Day 183) post primary vaccination and 17 participants had data available at Day 190. Serum spike binding antibodies against SARS-CoV-2 were evaluated in an S-ELISA up to 7 days post boost (Day 190). A) Participants18–55 years of age are represented with a blue line. GMCs are depicted above each time point and response rates are illustrated at the bottom of each panel. B) Dot plots representing the distribution of the participants per timepoint. N, GMC (ELISA Unit/mL) and percent responders are represented at the bottom of each plot. Grey open circles represent baseline binding antibody levels, green dots indicate that participants are responders and yellow open circles indicate that participants are non-responders.

In the Phase 1/2a study, binding antibodies were not detectable on the eighth day after vaccination but rose above the limit of detection on day 29 in all patients at a geometric mean concentration (GMC) of 420. This agrees with the phase 2 study, wherein the GMC rose to 900, on average, by the sixth month, without exception, and all participants had binding antibodies.

In the cohort of 65 years and above, neutralizing antibodies were found in approximately 70% of subjects at nine months from the priming dose, with a two-fold reduction in the GMT (at 114), compared to the day 29 GMT.

The Phase 2 study demonstrated neutralizing responses to a single dose of the vaccine in almost every single individual in the 18-55 years age group. This was comparable to 67% of individuals who were above the age of 65 years.

Beginning at day 15, the responses peaked by day 29. Thereafter, the decrease in the 65+ group was small and was not observed in the 18-55 group for at least 85 days. The GMT in both groups over this period was 186 and 243, respectively.

In the six-month follow-up, the neutralizing antibody titers for those aged 18-55 years remained at day 29 levels, with over 84% responding to the vaccine with an immune response. In the 65+ group, the GMT at six months was 134. 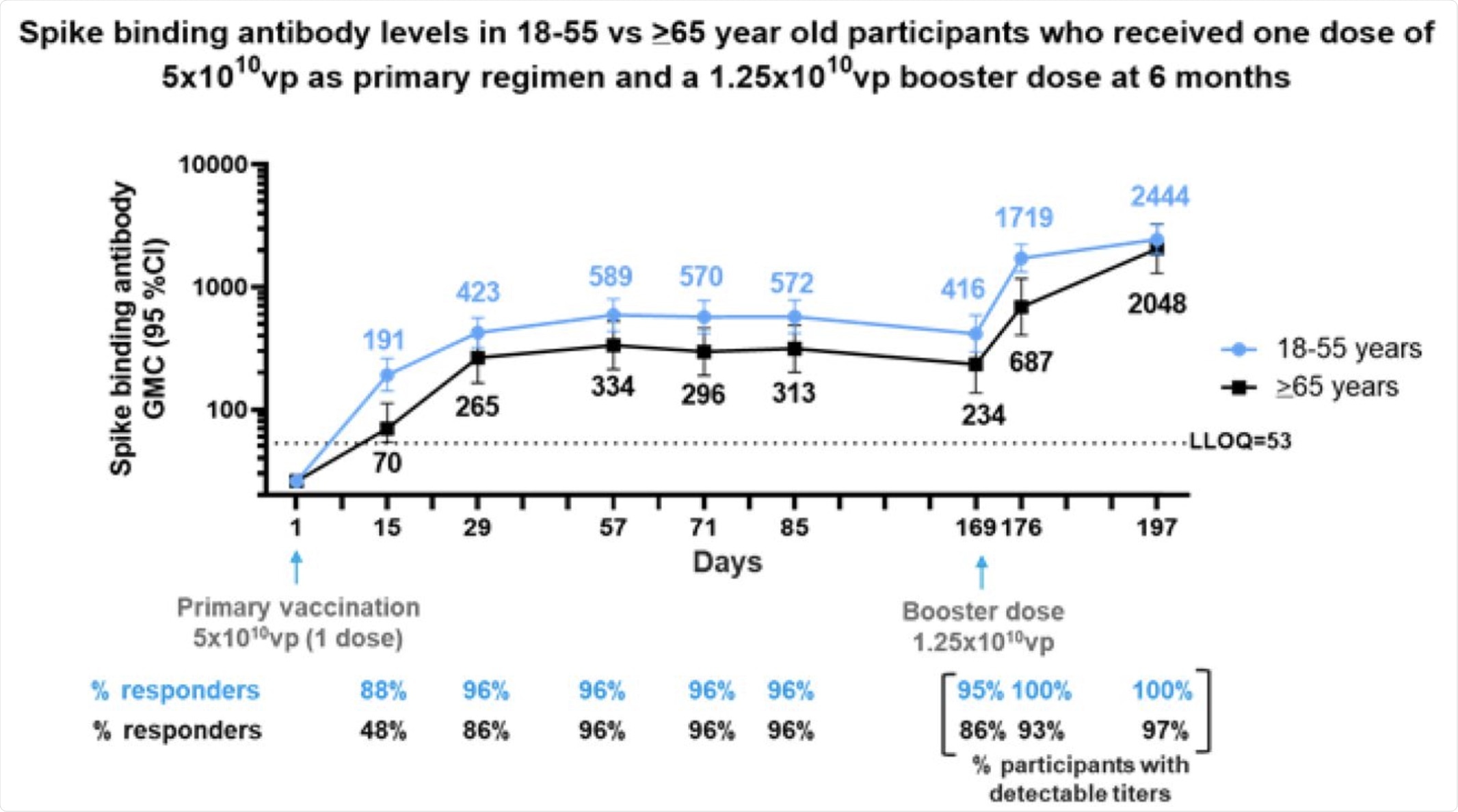 Significant boosting of antibody response was observed with a repeat dose of the same vaccine at six months. The binding antibody level by day 7 following the booster increased almost five-fold over the dose at the time of the booster dose, with the GMC increasing almost ten-fold from the day 29 levels.

When the booster dose was lower, the binding antibodies increased 3.6 fold within seven days, with the peak by day 28. At its peak, antibody levels rose to 6.4-fold higher than the levels after the first wave, but seven-fold the early antibody levels, respectively.

The current study also established the safety of low-dose vaccine boosters, with no sign of increased immune reactions in these patients. Grade 3 adverse events occurred in only 1% of vaccine recipients.

The Janssen vaccine is effective and produces a robust immune response against severe COVID-19, while also reducing hospitalizations and deaths due to the infection. This vaccine also protects against infection with the Beta variant, which is a SARS-CoV-2 variant of concern (VOC) that resists neutralization by antibodies raised against the ancestral strain of SARS-CoV-2.

More recently, the Janssen COVID-19 vaccine was given to 480,000 healthcare workers in South Africa. This single-dose vaccine was found to protect these workers against the Delta variant, which is currently the dominant strain in much of the world and is causing a surge of hospitalizations and deaths.

The current study shows that a single dose keeps neutralizing and binding antibodies high and at a level that is at or above that which is achieved a month after vaccination in both young and elderly subjects. The durable immunity demonstrated here corroborates the findings of an earlier clinical study by the same team that showed antibodies persisting for eight months, with protection against both Beta and Delta variants, in adults aged 18-55 years.

“Together, these data imply that a single dose of Ad26.COV2.S elicits a high quality and durable immune response of at least 6 to 8 months in adults >18 years of age.”

The high antibody levels are expected to be a marker of protective vaccine efficacy at these late time points as well.

Since a few subjects do show waning responses over time, the study also shows that a single booster dose increases the antibody levels rapidly and strongly to above the post-prime day 28 titers. This remained the case even when antibody levels had become undetectable.

The findings of the current study are significant, as they demonstrate that individuals are protected against severe COVID-19 from day 7 onwards, at lower antibody levels than on day 28. Moreover, the memory response occurred even with antibody levels below detectable limits, thereby indicating that the same phenomenon likely operates to protect vaccinated individuals against severe COVID-19 as well by triggering when natural infection occurs following waning immunity.

The booster also showed that antibodies to the adenovirus vector did not hinder anti-SARS-CoV-2 immune responses to even low doses of the vaccine. Heterologous adenovirus vector-based boosters may even be used after an mRNA vaccine, it is suggested, pending further study.

Notably, the six-month booster increased binding antibody levels by nine-fold, while at two months, the booster caused only a two-fold increase. A delayed booster at 6-8 months may therefore be optimal in obtaining sustained and protective efficacy against the virus, including emerging VOCs.

medRxiv publishes preliminary scientific reports that are not peer-reviewed and, therefore, should not be regarded as conclusive, guide clinical practice/health-related behavior, or treated as established information.

Dr. Liji Thomas is an OB-GYN, who graduated from the Government Medical College, University of Calicut, Kerala, in 2001. Liji practiced as a full-time consultant in obstetrics/gynecology in a private hospital for a few years following her graduation. She has counseled hundreds of patients facing issues from pregnancy-related problems and infertility, and has been in charge of over 2,000 deliveries, striving always to achieve a normal delivery rather than operative.

As Districts Insist on Vaccines, Some Teachers Push Back