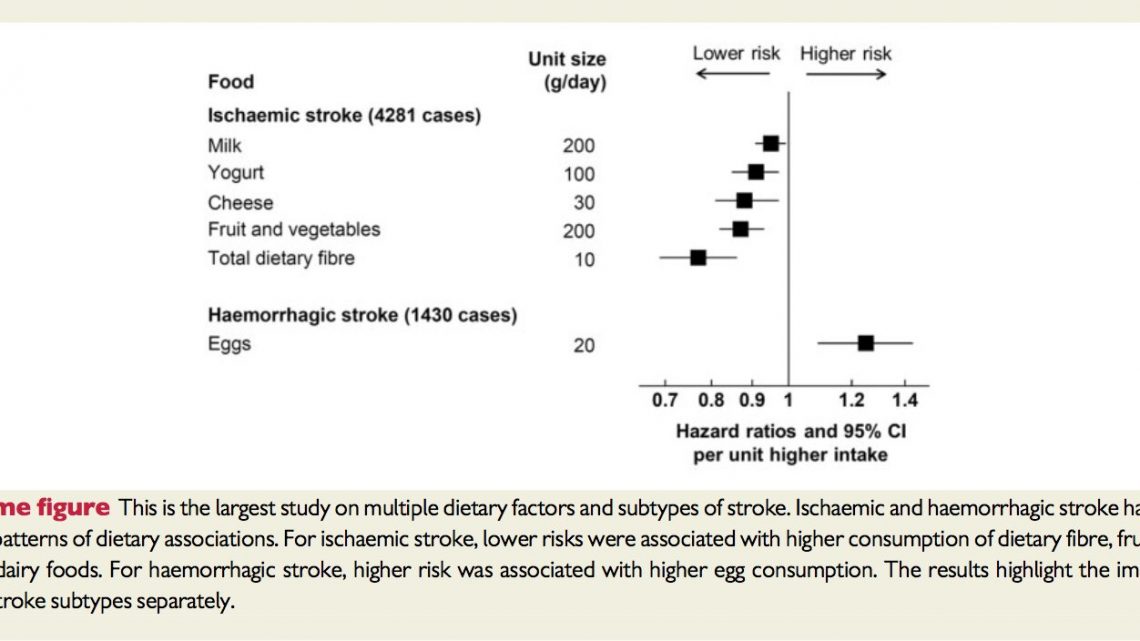 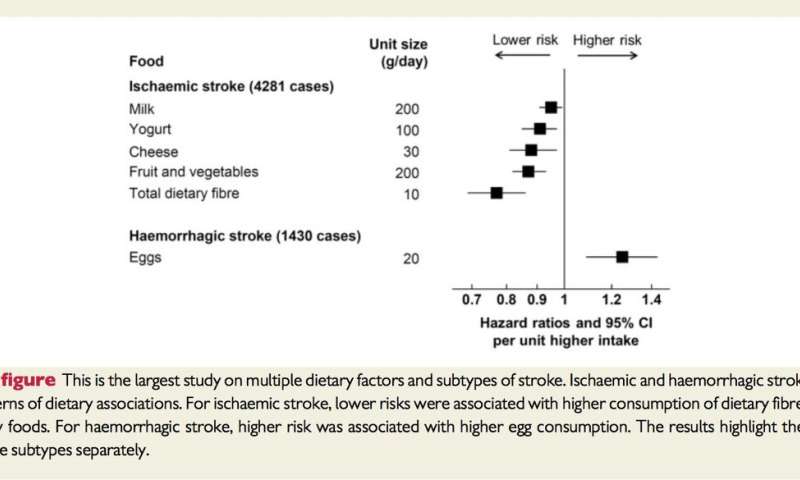 Until now, most studies have looked at the association between food and total stroke (all types of stroke combined), or focused on ischaemic stroke only. However, the current study of more than 418,000 people in nine European countries investigated ischaemic stroke and haemorrhagic stroke separately.

Dr. Tammy Tong, the first author of the paper and a nutritional epidemiologist at the Nuffield Department of Population Health, University of Oxford (UK), said: “The most important finding is that higher consumption of both dietary fibre and fruit and vegetables was strongly associated with lower risks of ischaemic stroke, which supports current European guidelines. The general public should be recommended to increase their fibre and fruit and vegetable consumption, if they are not already meeting these guidelines.

“Our study also highlights the importance of examining stroke subtypes separately, as the dietary associations differ for ischaemic and haemorrhagic stroke, and is consistent with other evidence, which shows that other risk factors, such as cholesterol levels or obesity, also influence the two stroke subtypes differently.”

The total amount of fibre (including fibre from fruit, vegetables, cereal, legumes, nuts and seeds) that people ate was associated with the greatest potential reduction in the risk of ischaemic stroke. Every 10g more intake of fibre a day was associated with a 23% lower risk, which is equivalent to around two fewer cases per 1000 of the population over ten years.

Fruit and vegetables alone were associated with a 13% lower risk for every 200g eaten a day, which is equivalent to one less case per 1000 of the population over ten years. No foods were linked to a statistically significant higher risk of ischaemic stroke.

Based on UK estimates, two thick slices of wholemeal toast provide 6.6g of fibre, a portion of broccoli (around eight florets) provides about 3g, and a medium raw, unpeeled apple provides about 1.2g of fibre. The European Society of Cardiology (ESC) and the World Health Organization Regional Office for Europe recommend consuming at least 400g of fruit and vegetables a day; the ESC also suggests people should consume 30-45g of fibre a day.

The researchers found that for every extra 20g of eggs consumed a day there was a 25% higher risk of haemorrhagic stroke, equivalent to 0.66 extra cases per 1000 (or around two cases per 3000) of the population over ten years. An average large-sized egg weighs approximately 60g. Egg consumption in the EPIC study was low overall, with an average of less than 20g eaten a day.

The researchers say the associations they found between different foods and ischaemic and haemorrhagic stroke might be explained partly by the effects on blood pressure and cholesterol.

Dr. Tong and her colleagues analysed data from 418,329 men and women in nine countries (Denmark, Germany, Greece, Italy, The Netherlands, Norway, Spain, Sweden and the United Kingdom) who were recruited to the European Prospective Investigation into Cancer and Nutrition (EPIC) study between 1992 and 2000. The participants completed questionnaires asking about diet, lifestyle, medical history and socio-demographic factors, and were followed up for an average of 12.7 years. During this time, there were 4281 cases of ischaemic stroke and 1430 cases of haemorrhagic stroke.