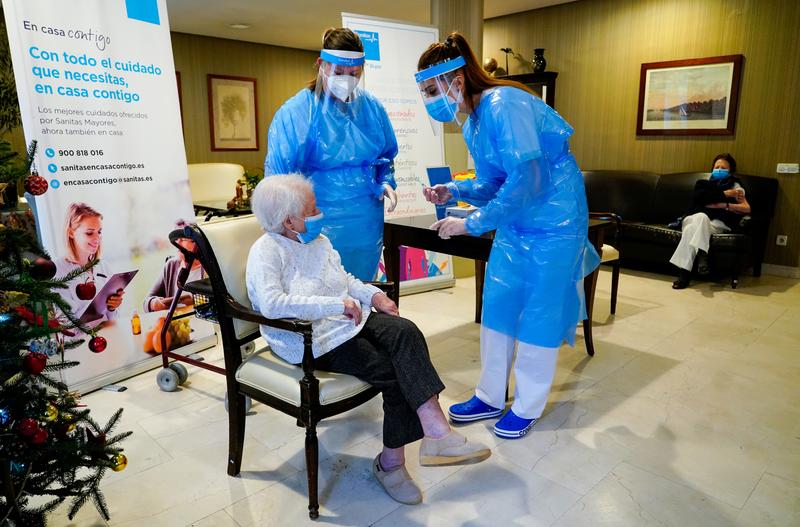 Spain close to vaccinating all nursing-home residents, on track for summer goals

MADRID (Reuters) – Spain has given a full two-shot course of coronavirus vaccines to almost all its elderly nursing-home residents, the FED care-home association said on Friday, restoring some sense of security to the most vulnerable section of the population.

Separately, Prime Minister Pedro Sanchez said the country, which has administered 2.8 million doses and fully inoculated 1.14 million people, was on track to vaccinate 20 million people in the first half of 2021 out of a population of 47 million.

Nearly 43,000 care-home residents died of COVID-19 or suspected infection in the devastating March-May first wave of contagion, and prosecutors are investigating more than 200 cases of potential criminal negligence at such homes.

But more than 97% of residents have now been vaccinated across Spain’s 17 regions, according to the FED, putting nursing homes among the country’s safest places.

“They are very positive data that allow us to be optimistic about the future,” said FED’s president Ignacio Fernandez Cid. “Immunity will allow us to gradually return to the longed-for lost normality.”

Health Emergency Chief Fernando Simon said earlier this week that for the first time since the start of the pandemic, people over 65 who live in care homes have a lower rate of infection than those who live outside, supporting the thesis, if indirectly, that the vaccines are having an effect.

Frontline medics and care workers are the only people under 65 to receive a vaccine so far.

Spain will now give shots made by Pfizer-BioNTech and Moderna to people over 80, while AstraZeneca’s drug will go to key workers under 55.

With a third wave quickly receding, Spain’s two-week infection rate hit 294 cases per 100,000 people on Friday, from almost 900 cases at the end of January, prompting several regions to relax measures.

Madrid on Thursday pushed its curfew back an hour to 11 p.m. and on Friday lifted travel restrictions on 31 neighbourhoods.