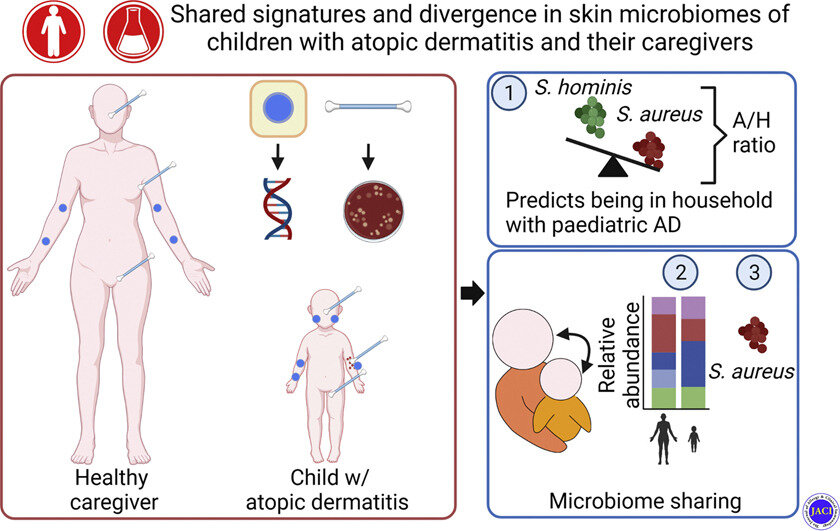 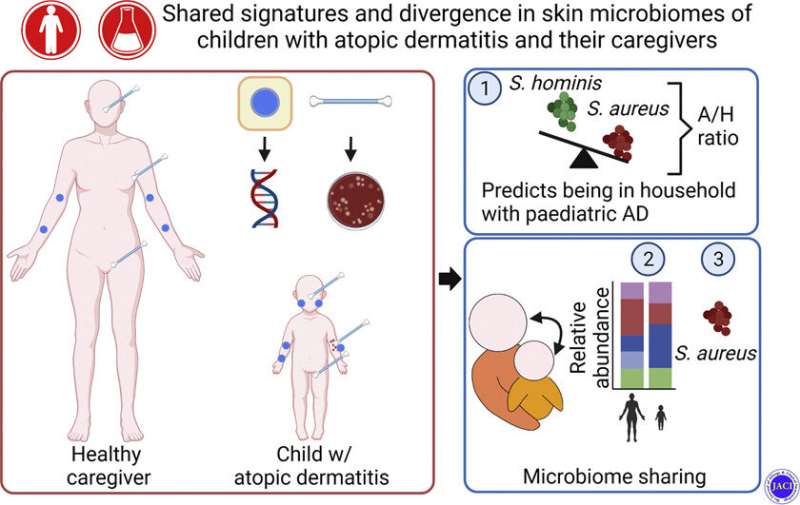 Patients with moderate to severe atopic dermatitis (AD) experience intense skin irritation and itchiness that causes them to scratch uncontrollably and may also experience complications such as bacterial skin infections. Now, recent research has revealed that the sharing of skin microbes between patients with AD and their caregivers, may be the cause of the transference and perpetuation of AD in these patients.

AD is a common chronic skin condition that occurs in 15 to 20% of children. The flares happen because of a predominance of Staphylococcus aureus (S. aureus) and reduced microbial diversity. Up to 30% to 40% of the human population is asymptomatically colonized with S. aureus, but S. aureus colonization in children with AD is as high as 80% to 100%, of which up to 16% are methicillin resistant, which complicates clinical treatment.

The study was published in the Journal of Allergy and Clinical Immunology, led by Dr. Elizabeth Tham from the Department of Pediatrics at the Yong Loo Lin School of Medicine, National University of Singapore (NUS Medicine) and Dr. Chia Minghao from A*STAR’s Genome Institute of Singapore (GIS), and including scientists from both organizations as well as the A*STAR Skin Research Labs (A*SRL).

The study sought to understand shared skin microbiomes between children with AD and their parents or caregivers. The team recruited 30 children with moderate to severe AD, between the ages of 0 to 10 years old, and one healthy primary caregiver for each child. The primary caregiver had to be someone who was living in the same household as the child and spent at least 8 hours a day with the child for the past 6 months.

Skin samples were collected from non-lesional skin at common flare sites, such as the forearms, cheeks and the elbow pit of children and their primary caregivers, as well as from lesional skin in AD patients.

It was discovered that there were distinctive microbial signatures in the healthy caregivers which were similar to the non-lesional skin of AD children, despite the absence of any skin disease in the caregivers.

In particular, a higher proportion of S. aureus abundances compared to the commensal Staphylococcus hominis (the A/H ratio) was found to be a sensitive and specific marker for affiliation to an AD household, regardless of whether they were otherwise healthy adults or children. This means that the ongoing skin microbial sharing between the children with AD and their caregivers could increase the tendency for the recolonization of S. aureus strains in the child which would exacerbate their skin inflammation.

The study findings continue to suggest that the factor contributing to the failure of treatment may be the sharing of skin microbes between children with AD and their close contacts. When treatment ceases, the skin of AD patients is often quickly recolonized with S. aureus, which could contribute to recurrent disease.

Therefore, to remedy AD would require a multi-pronged approach including existing measures like adequate skin hydration, aggressive treatment of ongoing inflammation and eradication of pathogenic bacteria, but most importantly, potentially extending precautionary measures to include close household contacts to break the chain of transmission.

Speaking as one of the leads in this study, Dr. Tham says that their “research showed that management of AD is more than treating symptoms of disease flares, which is only a temporary solution. The transference of skin microbiota between individuals in close contact is understudied in the field of AD. This sheds light on the possibility that future therapeutic approaches in AD may require extension to close contacts to disrupt the infectious chain of transmission.”

Noticing blood when you brush? Here’s what to do about it
Recent Posts