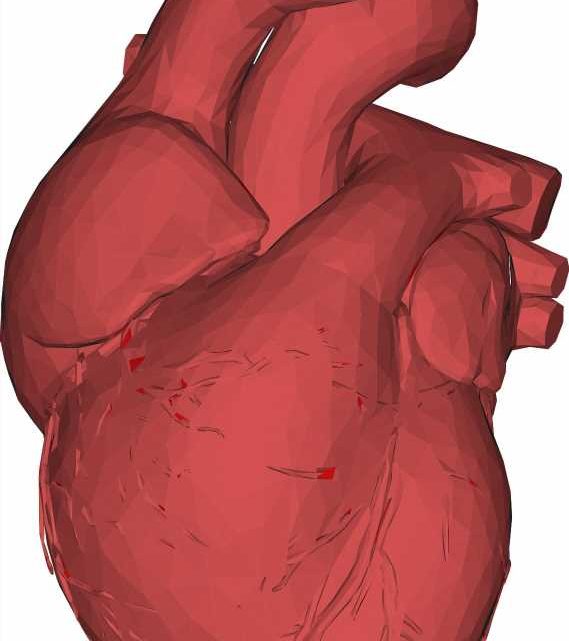 The amount of calcified plaque in the heart’s arteries is a better predictor of future heart attacks than of strokes, with similar findings across sex and racial groups, according to new research from UT Southwestern.

The study, published today in Circulation: Cardiovascular Imaging, is the first to examine the predictive value of recently recommended coronary artery calcium (CAC) score categories for heart attacks and strokes. Using two population-based, multiethnic cohorts, the researchers evaluated how well the amount of calcium detected by a CT scan of the heart predicted whether white, Black, and Hispanic men and women would have a stroke or a heart attack in the next 10 years.

Calcium is part of the fatty plaque that builds up in arteries supplying blood to the heart and brain and can lead to blockages, causing heart attacks or strokes. As plaque becomes more calcified and hardens, it becomes more visible on a heart CT scan.

“In our study, there was a twofold greater risk of heart attack than stroke at CAC levels at or above 100,” a score indicating moderate to high levels of calcified plaque, says Parag Joshi, M.D., a cardiologist and assistant professor of internal medicine at UT Southwestern and senior author of the study. “That held true for Black, white, and Hispanic men and women.”

“In fact, while the calcium score may not be a strong predictor of stroke risk for most, for some reason it did well in predicting strokes in Black participants,” says Anurag Mehta, M.D., the first author of the study, formerly at UT Southwestern and now at Emory University School of Medicine.

The findings could help guide health care providers as they decide how aggressively to treat patients with risk factors such as high cholesterol and blood pressure but who have never had a major cardiovascular event.

In 2018, the American Heart Association and the American College of Cardiology issued joint cholesterol management guidelines that recommend using the CAC score as an aid when deciding whether to prescribe a cholesterol lowering statin drug in situations where the decision—based on the routine risk assessment using systolic blood pressure, cholesterol level, etc. – is uncertain. 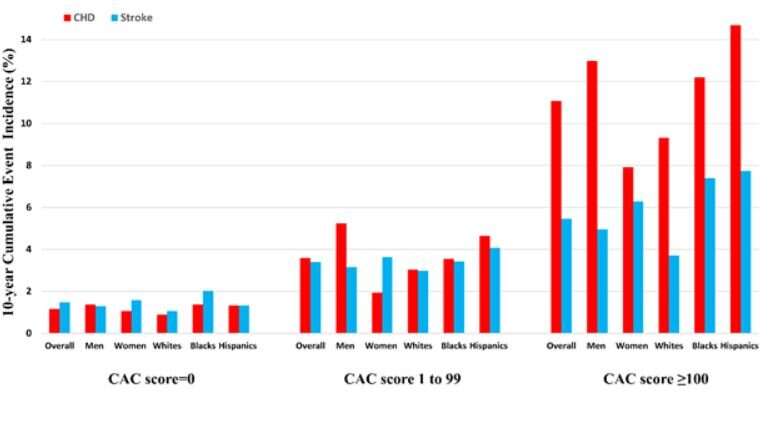 Joshi’s study evaluated data from more than 7,000 participants in two large studies—the Multi-Ethnic Study of Atherosclerosis (MESA) funded by the National Institutes of Health, and the Dallas Heart Study at UT Southwestern.

The authors divided study participants by the AHA/ACC calcium risk categories—0, 1-99, and 100 or above—to evaluate how useful the calcium scores would have been in predicting heart attacks and strokes. It also subdivided the participants by sex and race (Black, white, and Hispanic) to calculate the risk levels for the different groups.

For participants with a calcium score of zero, there was a similarly low risk of either a stroke or a heart attack in the coming 10 years—less than 2 percent for either event among all study participant categories, according to the study.

The risk level for both heart attacks and strokes rose a bit for those with scores of 1-99, yet still remained below 6 percent—increasing about equally for both and across most demographic groups. At this level, women did have a greater increase in the risk for stroke than for heart attack, whereas men had higher heart attack risk than stroke.

Meanwhile, stroke risk remained below 8 percent across all groups, although women, Black, and Hispanic people had higher risk than men and white participants.

For doctors and patients, the findings could help tilt the scales either toward or away from using statin drugs to lower cholesterol in cases where the decision is not clear-cut from factors such as age, sex, cholesterol, systolic blood pressure, and smoking history.

COVID-19 will expose the vulnerabilities of our orphaned older people, says expert

Vitamin B12 deficiency: Three warning signs on your tongue to watch out for
Recent Posts
We and our partners use cookies on this site to improve our service, perform analytics, personalize advertising, measure advertising performance, and remember website preferences.Ok