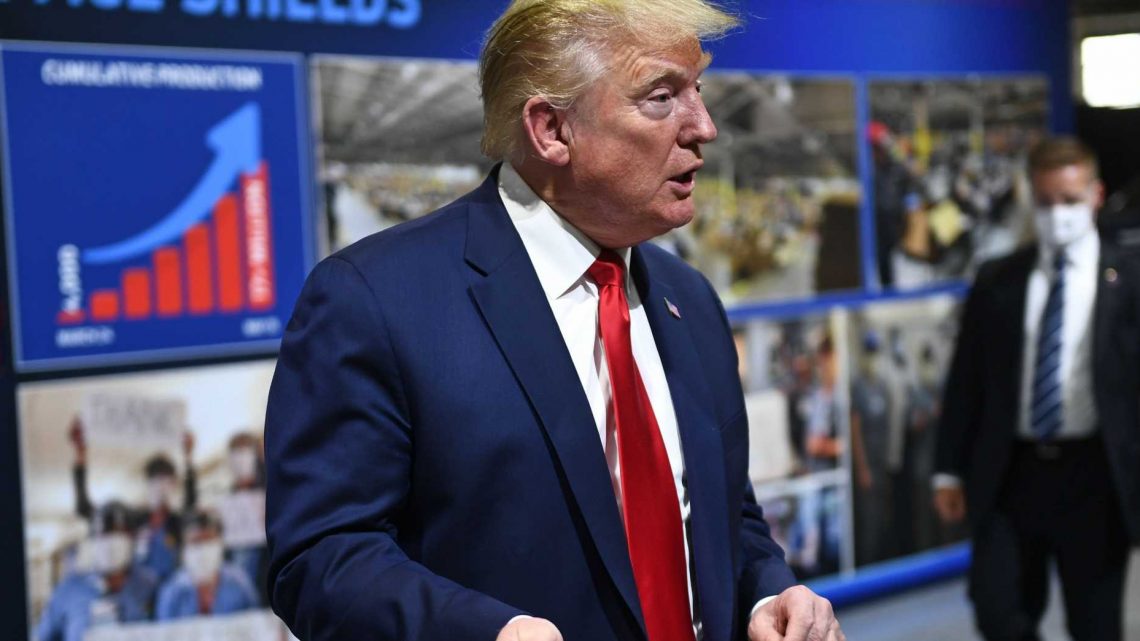 During a tour of a Rawsonville Ford facility in Ypsilanti, Michigan, President Trump wore a mask while away from the public eye. Trump said that he was wearing a mask and showed off his mask while talking to the press. When asked why he was not wearing a mask while in front of cameras, he responded, “I didn’t want to give the press the pleasure of seeing it.”

Trump also showed off his mask, which has the presidential seal on it. The president has yet to be shown in a mask publicly, and today’s decision is not in line with Ford’s safety measures for the factory. The automaker and GE Healthcare have repurposed the facility to build ventilators, masks, and face shields.

“Because of the virus, Ford was forced to stop automobile production for the first time since World War II,” Trump said. “That’s something.” He went on to say, in prepared remarks at the plant, that Ford called up the White House and asked “the most American of all questions, ‘How can we help?’ ”

He went on, “Just this week I spoke to five countries and I’m sending [ventilators] over.”

Trump called out a Ford electrician, Keith Pastorino, who spoke about the rapid ramp-up of this components plant to become a supplier of health-care products. Pastorino said: “When I first heard the news that my plant was going to be building ventilators, it only took me a minute to get hold of my UAW, and then I decided that this was my opportunity to serve my country. On the first day as a volunteer, we went full speed seven days a week, 12 hours a shift. I would go home sore, bruised . . . had trouble sleeping.

“I couldn’t say I’d be more proud of my co-workers for their efforts and their sacrifices to build these fine Ford ventilators, respirators, face masks, and face shields.”

During the visit, Trump may have worn a mask while touring parts of the facility where there was no press, but not while speaking with African American leaders.

While Ford initially stated that it shared safety protocol information with the White House ahead of the President’s visit, it then issued a statement that seemed to walk back its requirement for Trump to wear a mask, stating: “The White House has its own safety and testing policies in place and will make its own determination.”

Earlier this week, Ford tweeted that it requires masks at its facilities to protect its workers.

Trump’s visit is also in violation of Governor Whitmer’s executive order that bans visits by nonessential visitors to manufacturing facilities including those taking a tour.

On Wednesday, Michigan Attorney General Dana Nessel sent a letter to Trump asking him to wear a mask during his tour. “Anyone who has potentially been recently exposed, including the president of the United States, has not only a legal responsibility, but also a social and moral responsibility, to take reasonable precautions to prevent further spread of the virus,” Nessel said.

The letter also said: “While my department will not act to prevent you from touring Ford’s plant, I ask that while you are on tour you respect the great efforts of the men and women at Ford—and across the state—by wearing a facial covering.”

From: Car and Driver