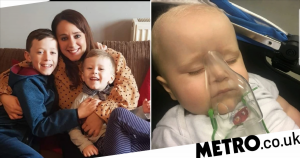 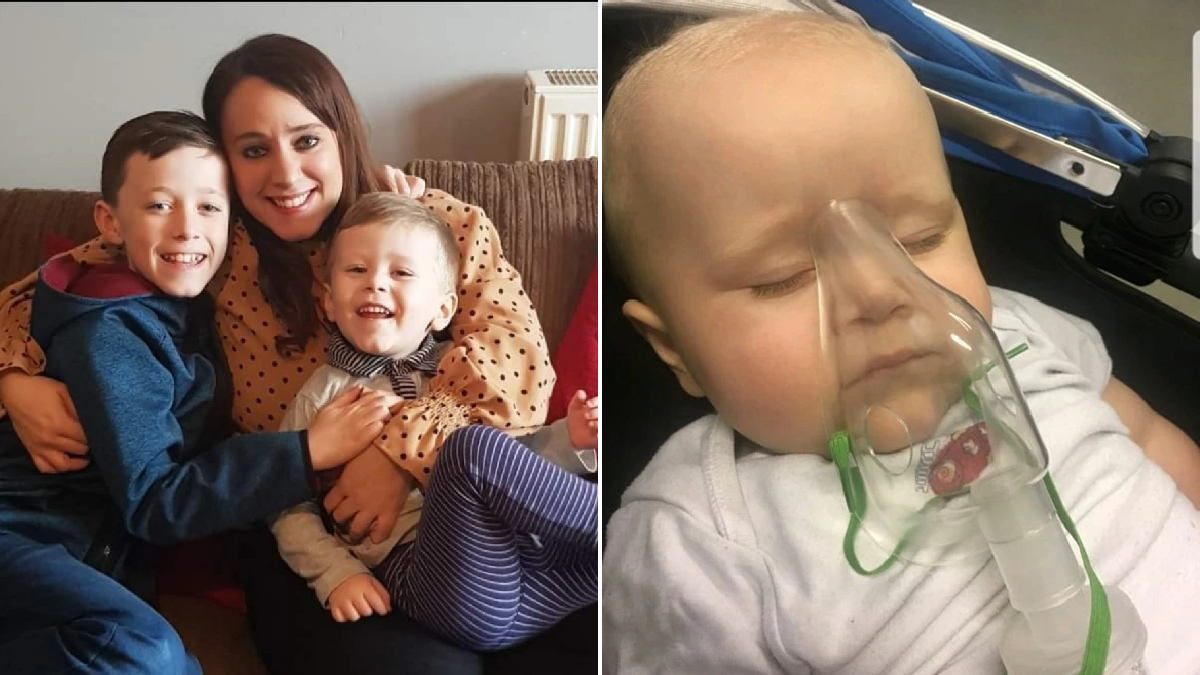 My son Freddie’s first bad asthma attack happened when he was eight months old – and he couldn’t stop coughing.

I rushed him to hospital and he was given a nebuliser to steady his breathing, as his oxygen saturation levels had dropped dramatically.

I could tell he was panicked because his tiny little body wouldn’t stop wriggling around, so I held him to try and stop him struggling and whispered soothing words into his ear.

Inside, I was terrified too, but I knew I had to keep him calm.

He was kept in hospital for three nights that time so the doctors could monitor him. I stayed by his bedside, holding his tiny, dimpled hand through the cot bars as he slept with an oxygen mask on his face. I felt so helpless.

Since then, five-year-old Freddie has been hospitalised at least 12 times because of his asthma.

As the mother of two children with asthma – and having the condition myself – I know when he’s struggling or feeling unwell and what signs to look out for – such as breathlessness or relentless coughing – which means I have to take him to hospital for assistance.

This time of the year is extra worrying. That’s because hay fever can cause those with pollen allergies to get runny noses and itchy eyes. But for my Freddie, it can be much worse, causing him to have a potentially life-threatening asthma attack.

Freddie began showing signs that he might have problems with his breathing when he was only a few months old.

I was breastfeeding him one morning and he kept stopping and pulling away. He sounded raspy and was pausing as if trying to catch his breath. With a sinking feeling, I realised that – as well as suffering with swallowing difficulties and silent reflux – Freddie now seemed to be having respiratory issues that I suspected might be asthma.

I took Freddie to the doctor who, because of the combination of health issues he was having, referred him to a consultant at Royal Brompton Hospital in London.

Although technically children aren’t accurately diagnosed with asthma until they are five, the consultant there said given his history, he was certain that was what it was.

He advised me to keep a symptom diary, also noting how often Freddie had asthma symptoms and had to be hospitalised, as well as how often he needed oxygen assistance. We had to have regular three-monthly check-ups from then on too.

Freddie was given a preventer inhaler to help dampen down the inflammation in his lungs and a blue reliever inhaler for times when he showed any signs of finding it really hard to breathe, such as when his tummy and ribs were caving in with each inhale. This indicated that he was having a potentially life-threatening asthma attack and if it got to that point, I’d have to take him to the hospital.

Maybe, to some mothers, having a child diagnosed with asthma wouldn’t be the most devastating news in the world. But I know how serious asthma can be.

I’d seen Kyle have several asthma attacks over the years, but his flare ups were more manageable than his younger brother’s. Kyle’s worst attack was when he was five and we had to call an emergency ambulance in the middle of the night because his reliever inhaler wasn’t helping.

I’d also had attacks myself – from the age of two up until I was 19 – and have many memories of being hospitalised and put on a nebuliser to help me to breathe normally. Sometimes, I’d have to stay in hospital for several days and be given countless doses of steroids.

It’s scary not being able to breathe. People describe an asthma attack as feeling like an elephant is sitting on their chest and that’s exactly how it can feel if it’s a bad one. But when the person going through it is your child, and they are at an age when they can’t communicate with you, it’s even worse.

When Freddie has a bad attack, he always needs a course of steroids and an oxygen nebuliser to help get his breathing under control. We have a clear plan about when and how to use them.

Every time Freddie is in hospital is worrying for me, but I must try and hide my fear from him, so he doesn’t become anxious. It’s hard explaining a condition like asthma to a young child. They don’t understand why they are different or need to take medicine every day.

Freddie used to get really distressed when we had to give him the nebuliser mask or his inhalers and I’d talk to him gently and tell him he needed his ‘special magic medicine’ to make him feel better.

He started nursery when he was two and I explained to the staff what might happen if he had an attack while there, but luckily, I always used to spot the signs early on so I would keep him home if he seemed unwell – especially if he had a cough or cold.

He always wanted me if he was poorly or struggling to breathe and I felt so anxious about leaving him anywhere as I’d worry that someone else wouldn’t spot the signs that he was about to have an asthma attack.

Thankfully to this day, he hasn’t had one when I’ve not been around, and his school always calls me straight away if they notice him becoming unwell.

When Freddie turned three, he became more aware of his condition and could recognise himself when he was feeling unwell or needed some extra help, which made asthma less frightening for him.

By the time he started school in September last year, I’d already taught him how to use his inhalers – which are always in his schoolbag – so he knew that if he wasn’t feeling good to take his reliever inhaler and slow down a little bit.

I think it’s helped him feel more in control of his condition and knowing that his brother and I have asthma too means Freddie doesn’t feel so alone with his illness.

Being the mother of a child with severe asthma is tough because you want your child to have as normal a life as possible, but in the back of your mind there’s always the worry that they may have an asthma attack and you won’t be there to help them.

As Freddie has grown up, the triggers for his asthma – the things that prompt him to have an attack – have become more obvious, such as chilly weather or dust mites, and knowing his triggers means I can help him avoid them as much as possible.

There is one that’s hard to avoid though, especially when it’s summertime and Freddie wants to enjoy playing out in the sunshine like any other little boy, and that’s pollen.

The charity Asthma + Lung UK announced last month that 59% of the 5.4million people with asthma in the UK say pollen is a trigger for them, which amounts to over 3million people. Freddie is unfortunately among this number.

When pollen levels are high, it’s a nightmare for him. We have to be more vigilant, closing the windows to keep pollen out of the house, and he often can’t go to the park with his friends if it’s a hot, high pollen day.

It’s a shame, as I want him to be able to do all of the fun things other four-year-olds do in summertime. But the reality is, it’s too dangerous for him. He has friends over for movie afternoons and playdates instead to make up for it.

Despite me being careful, Freddie has ended up in hospital every year during pollen season with a bad asthma attack, and his last one was only a few weeks ago. He started continuously coughing during the night to the point where he wasn’t even catching his breath, and I just knew it wasn’t a good sign.

The next day I took him to the GP, who said his chest was bad enough for him to be started on steroids, so I kept him under close watch at home.

Freddie was given the drugs, but another two distressing days of watching him cough and struggle followed until they began to work. He finally perked up and was back to his usual self again, but no matter how many times we have gone through these scary episodes, it doesn’t get any easier. It’s awful watching him go through an attack.

Since his last attack, I’ve been extra careful, making sure Freddie takes antihistamines every day, and following the GPs advice to increase his steroid preventer inhaler to minimise the risks of a pollen-induced attack.

My only hope is that his condition improves as he gets older – as Kyle’s did – and that he can finally enjoy a summer outside without the constant fear that he might have an asthma attack.

People don’t realise just how serious and life-threatening asthma can be – especially during hay fever season – and how hard it is for a mother to watch her child struggling to breathe.

Asthma + Lung UK is the leading UK charity supporting everyone with a lung condition and fighting for everyone’s right to breathe. For information and support, visit their website here or call the helpline on 0300 222 5800.