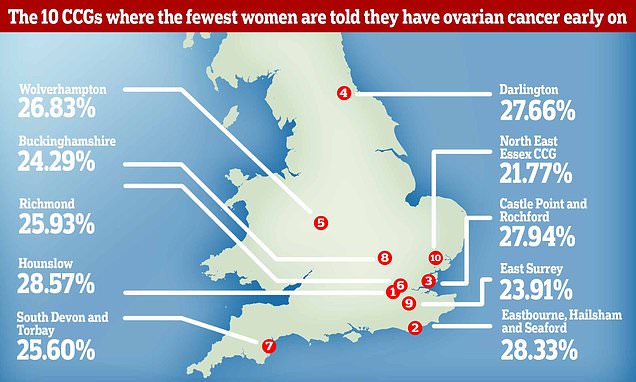 Three times fewer women are being diagnosed with early stage ovarian cancer in some NHS trusts because of a ‘postcode lottery’.

The disease, often branded a ‘silent killer’, kills almost 90 per cent of women who are told their cancer is stage four, figures show.

Survival rates are much higher when the cancer is caught early, when the tumour is small has not spread to surrounding tissue.

But an audit of care has today revealed a stark difference in the number of women diagnosed at stages one or two across England.

In contrast, the rate is 62.9 per cent at NHS Islington CCG, according to the analysis by Target Ovarian Cancer. 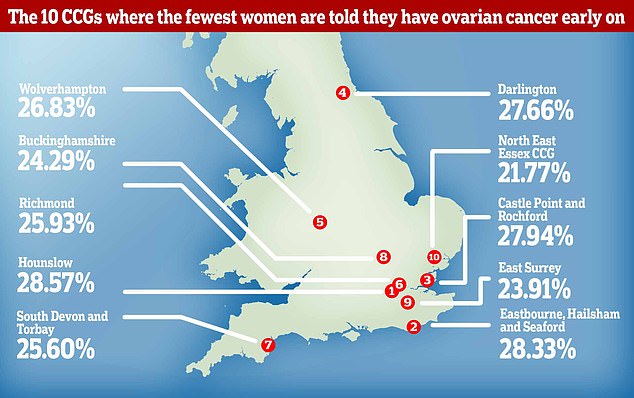 Just 21.8 per cent of women are diagnosed with ovarian cancer early at NHS North East Essex Clinical Commissioning Group (CCG). In contrast, the rate is 62.9 per cent at NHS Islington CCG, according to the analysis by Target Ovarian Cancer 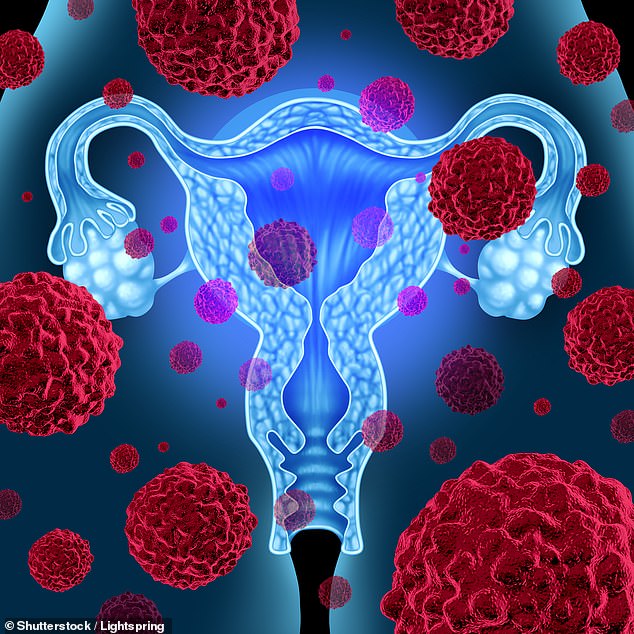 The disease, often branded a ‘silent killer’, kills almost 90 per cent of women who are told their cancer is stage-four, figures show

Annwen Jones, chief executive of the charity, said: ‘There are differences in ovarian cancer early stage diagnosis across England.

‘This can be due to a range of factors including how promptly women go to their GP and are referred for tests and how long it takes to carry these out.

‘In some areas there is also a lot of data missing, meaning we can’t be sure what the actual level of early diagnoses is.

‘We would like this to be further explored so that we can end these variations in early diagnosis.’

‘But sadly as we gather data it is clear that a postcode lottery exists around the country, with some areas diagnosing significantly more patients early than others.

WHAT ARE COMMON SYMPTOMS OF OVARIAN CANCER?

The most common symptoms of ovarian cancer are:

Other symptoms can include:

‘We want to see all patients diagnosed early enough to get treatment and survive this disease, no matter where they live.’

The disease is notoriously difficult to spot due to vague early symptoms, including bloating and loss of appetite.

Campaigners warn that many women are ‘fobbed off’ during multiple visits to their GPs before receiving their diagnosis.

Last year, the Government set the NHS a target to diagnose three quarters of cancer cases early within ten years.

But currently just 33 per cent of women with ovarian cancer are diagnosed at stage one or two.

Data was missing for more than a quarter of women diagnosed with ovarian cancer for some health boards.

Mother dying of incurable cervical cancer had been refused a smear