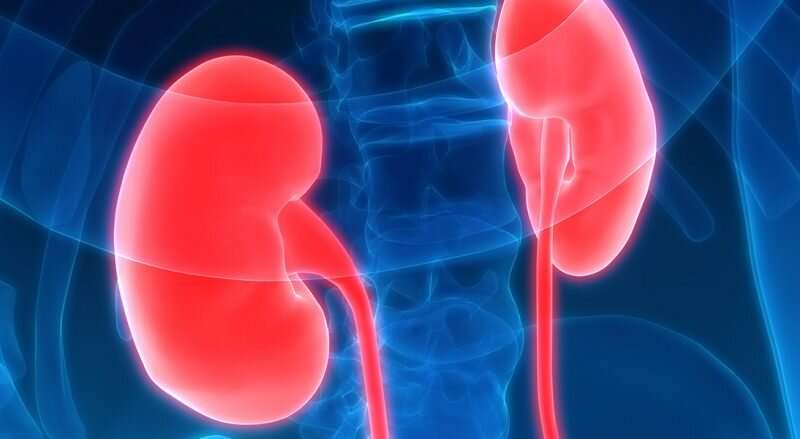 The team identified a drug—ethyl nitrite—that could be added to the preservation fluid to generate tiny molecules called S-nitrosothiols (SNOs), which regulate tissue-oxygen delivery. This, in turn, restored flow-through and reduced resistance within the kidney. Higher flow-rates and lower resistance are associated with better kidney function after transplantation.

Their research was funded by a grant from the Roche Organ Transplant Research Foundation and recently published in Annals of Surgery.

The optimal treatment is a kidney transplant, but demand far exceeds supply. Additionally, donation rates for deceased donors have been static for several years, despite various public-education campaigns, resulting in fewer kidneys available for transplant. And while the proportion and number of living donors has increased, this latter group still only makes up a small percentage of recovered kidneys for transplant.

Increasing the number of kidneys available for transplant benefits patients by extending lifespans and/or enhancing quality of life as well as the potential for reducing medical costs (a transplant is cheaper than ongoing dialysis). To help improve outcomes for kidney transplant patients, the team explored ways to extend the viability of donated kidneys.

Improvements in surgical techniques and immunosuppression therapies have made kidney transplants a relatively common procedure. However, less attention has been paid to maintaining/improving kidney function during the kidney-transport phase.

“We addressed this latter point through developing enhanced preservation methods,” said senior author James Reynolds, professor of Anesthesiology and Perioperative Medicine at Case Western Reserve School of Medicine and a member of the Harrington Discovery Institute at UH.

For decades, procured kidneys were simply flushed with preservation solution and then transported in ice-filled coolers to the recipient’s hospital. But advances in pumping technology slowly changed the field toward active storage, the preferred method for conveying the organ from donor to recipient.

“However, while 85% of kidneys are now pumped, up to 20% of kidneys are determined to be unsuitable for transplant during the storage phase,” said Kenneth Chavin, professor of surgery at the School of Medicine, chief of hepatobiliary and transplant surgery and director of the UH Transplant Institute.

“For several years, our team has directed research efforts toward understanding and improving the body’s response to medical manipulation,” Reynolds said. “Organ-donor physiology and ‘transport status’ fit well within this metric. We identified a therapy that might improve kidney perfusion, a significant factor in predicting how the organ will perform post-transplant.”

Heart attack symptoms: The sign in your hair that could signal you are at risk