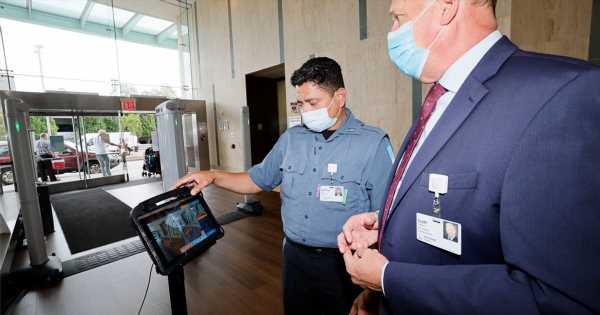 With the touchless Evolv Express systems, there is no need to unpack a bag, take off a coat or even stop. The system screens 4,000 people per hour, according to the company’s website.

Throughout North America and the United Kingdom, the technology has stopped more than 30,000 guns from entering locations in the first six months of the year, according to an August 11 Evolv announcement. One incident reportedly prevented a loaded gun from entering a hospital, and the hospital engaged law enforcement.

Sensors and artificial intelligence spot weapons and ignore personal items like cellphones and keys as visitors walk through at a natural pace. The system displays where the potential threat is located on a person or in a bag in real time.

The system offers built-in integration with video and mass notification systems to extend alerts to all security teams and provides an analytics dashboard to generate data and enable teams to review incident responses.

“Northwell is known for its world-class healthcare and it’s our mission to keep patients safe with world-class security measures,” said Scott Strauss, vice president of security and support systems for Norwell Health, in a prepared statement.

The AI and sensor-driven screening systems will also be installed at other Northwell Health facilities as part of a larger health system-wide initiative to maintain the safety of employees, patients and visitors.

According to its website, Northwell Health also formed a Center for Gun Violence Prevention in 2020 to chart a public health approach to end the epidemic of gun violence and received a federal grant to launch a patient screening pilot.

Northwell Health has hosted hundreds of trainings over the last few years that include active-shooter drills, seminars on conflict de-escalation techniques and courses on how to respond to bleeding emergencies so that staff is better prepared if an incident occurs at a hospital, according to the announcement.

That’s because violence is about four times more prevalent in healthcare than in any other industry.

In January, a man walked into the Jacobi Hospital emergency room in the Bronx, New York, and shot another patient in the arm, according to NY1.com. In June, a shooter entered Saint Francis Hospital in Tulsa, Oklahoma, and killed four people, then himself, according to the Associated Press.

Several nurses recently spoke to the St. Louis Post-Dispatch about long-standing security concerns after a patient stabbed a nurse and a paramedic in the SSM Health DePaul Hospital emergency department on July 11. The nurses specifically cited the lack of a security checkpoint upon entering the ER, and that they are often in charge of confiscating weapons found on patients.

“When you’re working at DePaul you’re literally walking down the halls looking over your shoulder,” one nurse told the Dispatch.

Healthcare workers have voiced their concerns about U.S. Department of Homeland Security’s Run-Hide-Fight training advised by the Cybersecurity and Infrastructure Security Agency.

Effective in January, the Joint Commission now requires hospitals to conduct a worksite analysis annually and address safety and security risks based on the findings. “The high incidence of workplace violence prompted the creation of new accreditation requirements,” the commission said in its report on the new Workplace Violence Prevention Standards.

“The installation of this new detection system is just the latest addition to a wide range of security protocols the health system has in place to protect those in our hospitals, minimize the risk of violence and maintain a safe working environment for our team members. This technology adds just another layer of safety – and improves confidence for everyone who enters these healing spaces,” said Michael Dowling, Northwell’s president and CEO in a prepared statement.