Even Nobel Prize winners can make mistakes! Top scientist admits ‘I did not do my job well’ as research she published after getting the prestigious award in 2018 is pulled from a journal

A Nobel Prize-winning scientist has retracted a paper she published last year and admitted the research was carried out badly.

Dr Frances Arnold won the prestigious $1million (£760,000) 2018 Chemistry prize along with two other scientists for their work revealing the evolution of enzymes.

A separate paper which she published last year suggested enzymes found in E.coli bacteria could be forced to evolve in a way which gave them extreme precision in controlling where chemical reactions happen.

But Dr Arnold, who works at the California Institute of Technology, has now retracted this paper after it was revealed to be incorrect.

She said on Twitter that she had been ‘very busy’ when the paper was published and had not done her job well.

Other academics praised Dr Arnold for being honest, owning up to her mistakes and showing that even a Nobel Prize winner can make mistakes. 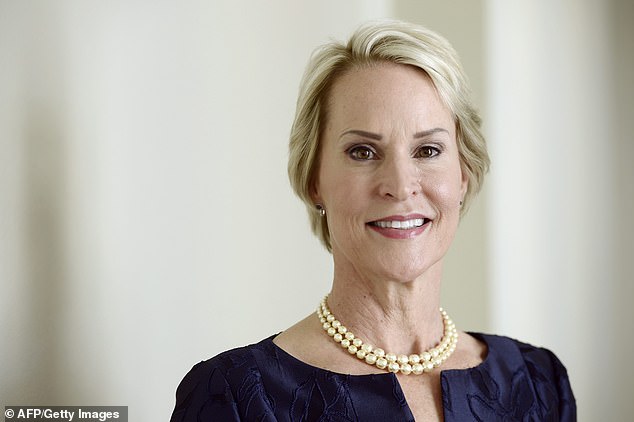 Dr Frances Arnold, who won the Nobel Prize for Chemistry in 2018, has retracted an unrelated paper she published last year after it was revealed its results couldn’t be proven

In a tweet, Dr Arnold wrote: ‘It is painful to admit, but important to do so. I apologize to all. I was a bit busy when this was submitted, and did not do my job well.’

The paper, titled ‘Site-selective enzymatic C‒H amidation for synthesis of diverse lactams’, was published with Dr Zhi-Jun Jia and Inha Cho, who both worked with Dr Arnold at Caltech.

It was printed in the prestigious journal Science, but retracted – a scientist’s way of taking back what they have written and admitting it was wrong – on January 2.

The work is not the paper which won the Nobel Prize, and the colleagues are not the same people who won that award alongside Dr Arnold.

In a notice, the journal Science said efforts to try and reproduce the work of Dr Arnold, Dr Jia and Ms Cho had failed, essentially proving it wrong.

The notice added: ‘Careful examination of the first author’s lab notebook then revealed missing contemporaneous entries and raw data for key experiments. The authors are therefore retracting the paper.’

Dr Arnold, who was only the fifth woman ever to win the chemistry Nobel Prize, and now sits on the board of Google’s parent company Alphabet, said she was ‘totally bummed’ that the work had not been accurate.

But other chemists commended her for owning up to her mistake.

Other researchers commended Dr Arnold for owning up to her mistake. Dr Dominique Hoogland, a King’s College London researcher, said: ‘This shows that anyone can make an honest mistake’

Anmol Kulkarni, a scientist at the Italian Foundation for Cancer Research, tweeted: ‘Seeing a Nobel laureate tweet about a paper retraction teaches how important it is for scientist to be honest’

Professor Leroy Cronin, from the University of Glasgow, said scientists should feel able to be honest and open about their failures

Dr Howard Junca, a scientist in Germany, added: ‘A Nobel Prize winner teaches the world a lesson: to face, correct and learn from mistakes with transparency and humility!’

Anmol Kulkarni, a scientist at the Italian Foundation for Cancer Research, tweeted: ‘Seeing a Nobel laureate tweet about a paper retraction teaches how important it is for scientist to be honest about their data’.

Dr Dominique Hoogland, a King’s College London researcher, said: ‘This shows that anyone can make an honest mistake and acting to correct that is the best response.’

Dr Howard Junca, a scientist at Germany’s Leibniz Institute, added: ‘A Nobel Prize winner teaches the world a lesson: to face, correct and learn from mistakes with transparency and humility!’

Frances Arnold of the US was awarded for using the principles of evolution to develop new enzymes, which are the basic chemical tools of life.

At first she tried to force such changes using more traditional methods, but her breakthrough came when she allowed evolutionary forces such as selection and even chance to govern the development of enzymes, while still subtly guiding them.

It was the first step toward a revolution in the field, with the slight but fundamental changes leading to more environmentally friendly chemical substances, new pharmaceuticals, and more renewable fuels, according to the Royal Swedish Academy of Sciences. 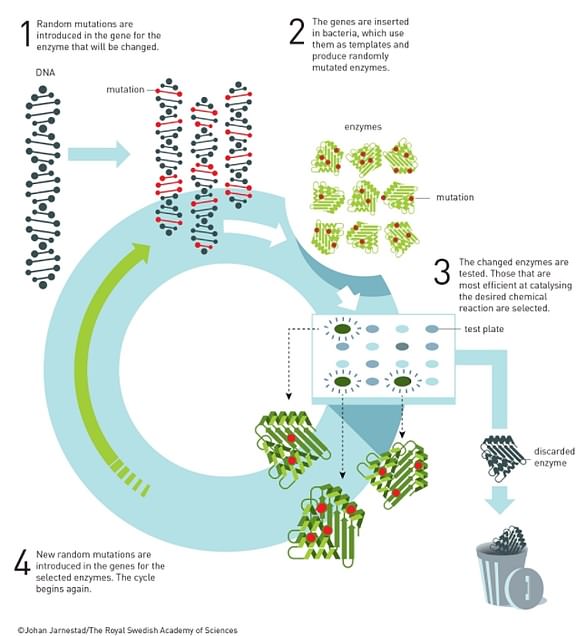 Her work has made it possible to solve problems such as replacing toxic chemicals like fossil fuels. Her method of creating new proteins with desired properties is being used to convert renewable resources like sugar cane into biofuels

The principles behind evolution were also used by the other Nobel winners, George Smith of the US and Britain’s Gregory Winter, who focused on tiny viruses that infect bacteria called bacteriophages – or phages for short.

Gregory Winter then applied directed evolution to develop the world’s first pharmaceutical entirely based on a human antibody.

This has since led to a wide range of different drugs that can target certain tumour cells, arthritis, the toxin that causes anthrax, help slow down lupus and even in some cases cure metastatic cancer.

Many more such antibodies are currently undergoing clinical trials, including some to combat Alzheimer’s disease, the Academy said.

‘The use of antibodies has resulted in a paradigm shift in the way that we now treat so many diseases which has brought significant benefits to patients across the world and will continue to do so for years to come,’ he said.

‘They have applied the principles of Darwin in test tubes’, the head of the Academy’s Nobel Chemistry committee, Claes Gustafsson, told reporters.

‘They have used the molecular understanding we have of the evolutionary process and recreated the process in their labs.

‘They have been able to make evolution many 1000s times faster and redirect it to create new proteins.’