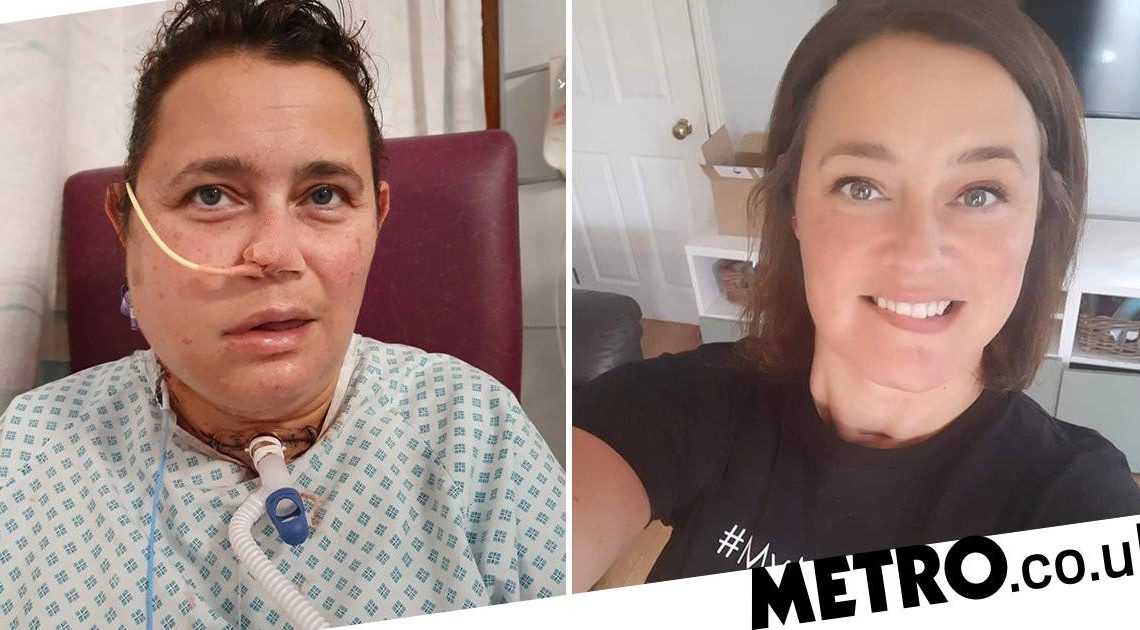 A mum-of-two has had to have facial reconstruction using a bone from her LEG – after a rare tumour ate away her jawbone.

When Gill Wood felt a lump in her tooth last year, she went to the dentist who thought it was an abscess.

The 47-year-old had some pain and tingling in her jaw which continued and in August 2019, a tumour was discovered in her lower jawbone.

The mum-of-two was terrified when the rare tumour – called ameloblastoma – was discovered, but was relieved when doctors said it was benign.

Unfortunately for Gill though, it had ‘eaten its way’ through her jawbone, meaning she had to go through a lengthy 13-hour operation to have it removed and her jaw reconstructed.

Gill, a primary school teacher, from Sheffield, South Yorkshire, said: ‘I was terrified, but I had to keep telling myself I’d get through it.

‘They warned me I could lose my ability to speak, eat and taste – but six months down the line I’m back to my new normal.

‘The surgeons did an amazing job.’

Gill has always had regular dentist appointments, and didn’t have any fillings so when she felt some pain and ‘tingling’ in her jaw that wouldn’t subside, she decided to go to her dentist in May 2019.

She was told it was just an abcess and given some antibiotics.

However, after feeling the lump behind her molar, and with the addition of a painful earache, Gill decided to go back to an emergency dentist one weekend in July 2019.

‘It wasn’t constant pain to start with, just a tingling all along my jaw,’ Gill said.

‘But when the pain got worse I knew something was definitely wrong.’

The emergency dentist urged her to see her dentist immediately for an x-ray after doing a preliminary scan.

‘His eyes were so wide when he told me, it was quite scary,’ Gill said.

The next day, her usual dentist did another x-ray and she was referred to a hospital dentist for a consultation.

On August 15 2019, Gill went for a CT scan at Royal Hallamshire Hospital, Sheffield, which showed a mass in her jaw, which had ‘eaten away quite a lot of jawbone’.

The hospital dentist revealed they needed to perform a biopsy immediately, to determine whether the mass was cancerous or not.

‘I was so scared – they said it was the size of a golf ball and they didn’t know whether it was cancerous,’ Gill said.

‘Waiting for the results from the biopsy was the longest 10 days of my life.’

Gill and her husband Rob, 47, an IT project manager, decided not to tell their two children – Joe, 15, and Erin, 13 – what was happening.

‘We didn’t want to scare them, so I just said there was something wrong with my tooth,’ Gill said.

On August 23 2019, Gill was told that the tumour was a rare ameloblastoma – a non-cancerous, benign tumour that originates in the jaw bone.

Although it wasn’t cancerous, she needed surgery because of the damage it had done to her jawbone.

Three surgical teams at the Royal Hallamshire Hospital, Sheffield, were involved in the complex operation to take bone from Gill’s fibula – the outer and smaller of the two bones between the knee and the ankle – along with an artery, vein and soft tissue – all of which were moved to Gill’s jaw.

The operation took 13 hours on November 13, 2019 and Gill remained in hospital for 12 days for the initial recovery.

She had to learn to swallow and eat again – using a mirror as an aid at mealtimes as she wasn’t sure where her mouth was.

‘My jaw hurt so much once my tracheotomy was taken out,’ Gill said.

‘I hadn’t spoken for 10 days after the surgery – I was making up for lost time.

‘Doctors joked with me that if I kept my mouth shut I might find it didn’t ache – and they were right!’

Her tongue will be permanently numb, and she lost two teeth due to the operation, but Gill feels lucky to have made the progress she has in such a short space of time.

Six months on, Gill is recovering well – and says she has ‘turned a real corner’ in the last couple of weeks.

‘I will be scanned regularly for years now as there is a 10% chance of the tumour returning – but that means they’ll catch it if it does,’ Gill said.

‘Talking can still be a bit painful and I completely overdo that so I am learning to be quiet.’

Gill wants to raise awareness of the rare tumour, as although recovered, she knows the damage it can do.

‘If my dentist missed it, then yours might too,’ she said.

‘But if caught early then the outcome doesn’t need to be this dramatic.

‘The more people that know about it the better.’