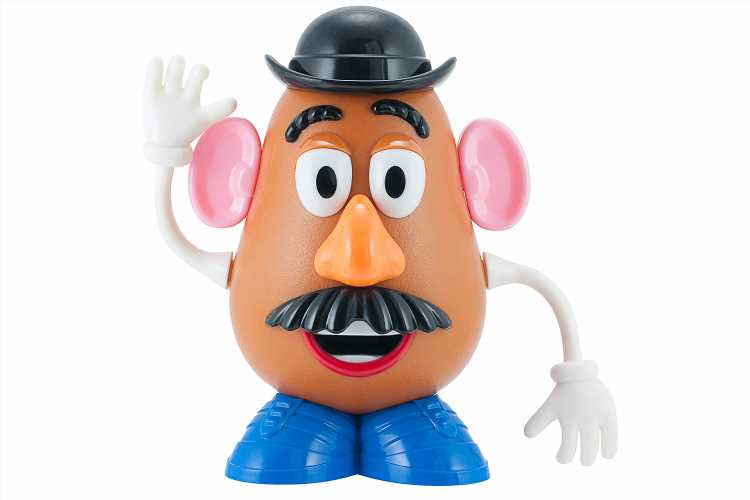 Mr. Potato Head will soon be a blank canvas.

During Hasbro's 2021 presentation to investors on Thursday, the toy company announced that the iconic Mr. Potato Head will soon ditch the "Mr." and become a non-gendered toy for kids to transform and customize as they choose. According to a press release, the rebrand will go into effect this fall for a new product line.

Hasbro called the new line "a celebration of the many faces of families allowing kids to imagine and create their own Potato Head family with 2 large potato bodies, 1 small potato body, and 42 accessories, their potato family can have up to 2 parents, and a baby."

"Hasbro is making sure all feel welcome in the Potato Head world by officially dropping the Mr. from the Mr. Potato Head brand name and logo to promote gender equality and inclusion," the company added. "In the fall, the new Potato Family Pack 'Create Your Potato Head Family' will celebrate the many faces of families allowing kids to imagine and create their own Potato Head family."

The rebranding will come with "a whimsical color palette and more inclusive messaging along with new product to appeal to the modern consumer."

Want to get the biggest stories from PEOPLE every weekday? Subscribe to our new podcast, PEOPLE Every Day, to get the essential celebrity, entertainment and human interest news stories Monday through Friday.

Meet Kira, the 2021 American Girl Doll of the Year Who Fights to Protect the Environment

"The sweet spot for the toy is 2 to 3 years old," Kimberly Boyd, a Hasbro senior vice president and general manager who works with the Potato Head brand, tells Fast Company.

"Kids like dressing up the toy, then playing out scenarios from their life," she adds. "This often takes the form of creating little potato families, because they're learning what it means to be in a family."

"Culture has evolved. Kids want to be able to represent their own experiences," she says. "The way the brand currently exists — with the 'Mr.' and 'Mrs.' — is limiting when it comes to both gender identity and family structure." A Peppa Pig Theme Park Is Coming to Legoland Florida in 2022: Everything We Know So Far

The toy launched in 1952, and originally required parents to supply an actual potato for the kids to add facial features and customize. Mr. Potato Head was the first toy to ever be marketed on television, according to PBS.

Removing one barrier to opioid use disorder treatment
Recent Posts