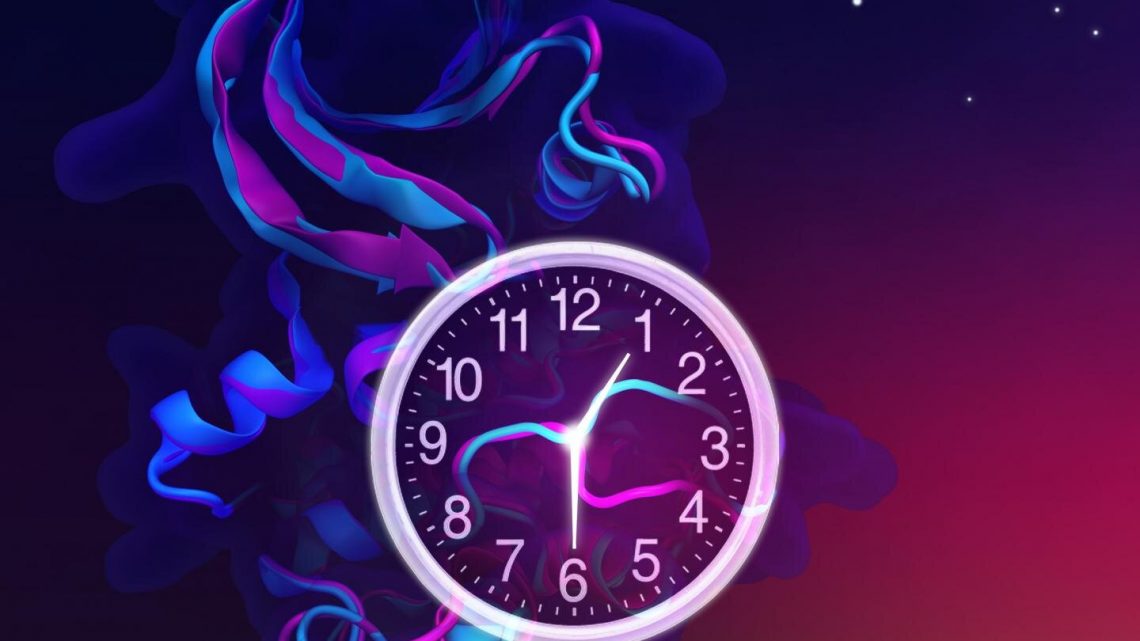 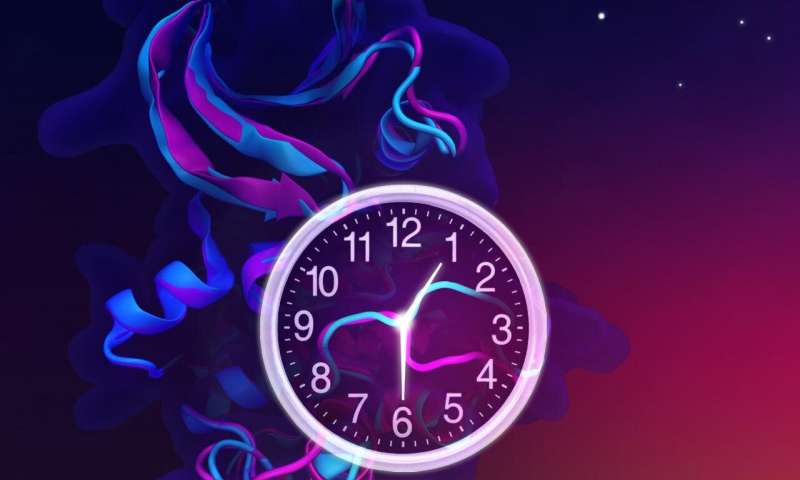 A new study of molecular interactions central to the functioning of biological clocks explains how certain mutations can shorten clock timing, making some people extreme “morning larks” because their internal clocks operate on a 20-hour cycle instead of being synchronized with the 24-hour cycle of day and night.

The study, published February 11 in eLife, shows that the same molecular switch mechanism affected by these mutations is at work in animals ranging from fruit flies to people.

In the new study, researchers focused on mutations in an enzyme called casein kinase 1 (CK1), which regulates a core clock protein called PERIOD (or PER). Clock-altering mutations in CK1 had been known for years, but it was unclear how they changed the timing of the clock.

CK1 and other kinase enzymes carry out a reaction called phosphorylation, adding a phosphate to another protein. It turns out that CK1 can phosphorylate either of two sites on the PER protein. Modifying one site stabilizes PER, while the other modification triggers its degradation. Partch and her colleagues showed how mutations in either CK1 or PER itself can alter the balance, favoring degradation over stabilization.

PER proteins are part of a complex feedback loop in which changes in their abundance set the timing of circadian rhythms, so mutations that increase the rate of PER degradation throw off the clock.

“What we discovered is this neat molecular switch that controls the abundance of the PER proteins. When it’s working right, it generates a beautiful 24-hour oscillation,” Partch said.

Partch’s lab performed structural and biochemical analyses of the CK1 and PER proteins that suggested how the switch works. To confirm that the interactions observed in the test tube matched the behavior of the proteins in living cells, they worked with researchers at the Duke-NUS Medical School in Singapore. Other collaborators at UC San Diego performed simulations of the molecular dynamics of the switch showing how the CK1 protein switches between two conformations, and how mutations cause it favor one conformation over another.

The switch involves a section of the CK1 protein called the activation loop. One conformation of this loop favors binding of CK1 to the “degron” region of PER, where phosphorylation leads to the protein’s degradation. The clock-changing mutations in CK1 cause it to favor this degron-binding conformation.

The other conformation favors binding to a site on the PER protein known as the FASP region, because mutations in this region lead to an inherited sleep disorder called Familial Advanced Sleep Phase Syndrome. The stabilization of PER can be disrupted by either the FASP mutations, which interfere with the binding of CK1 to this region, or by the mutations in CK1 that favor the alternate conformation of the activation loop.

The new findings also suggest why binding of CK1 to the FASP region stabilizes PER. With phosphorylation of the FASP region, that region then acts to bind and inhibit CK1, preventing it from adopting the other conformation and phosphorylating the degron region.

“It binds and locks the kinase down, so it’s like a pause button that prevents the PERIOD protein from being degraded too soon,” Partch said. “This stabilizing region builds a delay into the clock to make it align with Earth’s 24-hour day.”

Partch noted that it is important to understand how these clock proteins regulate our circadian rhythms, because those rhythms affect not only the sleep cycle but almost every aspect of our physiology. Understanding these molecular mechanisms may enable scientists to develop therapies for intervening in the clock to alleviate disruptions, whether they are caused by inherited conditions or by shift work or jet lag.

“There might be ways to mitigate some of those effects,” she said.

CK1 is also interesting because it seems to be the most ancient component of biological clocks. The whole feedback loop involving CK1, PERIOD, and other core clock proteins is found in all animals from insects to humans. CK1, however, is also found in every other organism with eukaryotic (nonbacterial) cells, including single-celled green algae in which it has been implicated in circadian rhythms.

Arthritis pain: 50-year-old woman found relief for her joints after taking this supplement