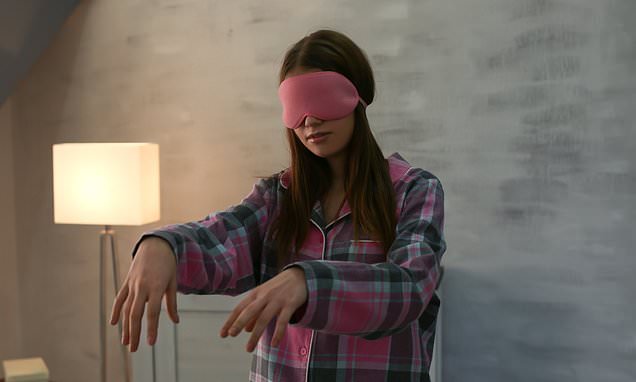 Meet the people who clean in a state of deep slumber

I could do that in my sleep! Meet the people who clean and even do the gardening in a state of deep slumber

Lining up with fellow competitors in the point-to-point race, Sally Jones tries to calm her restless horse as they wait for the starter’s orders.

Suddenly, they’re off. Sally’s horse thunders around the course. This time, Sally tells herself, she’s going to win. Crouching over the saddle, she urges her horse on.

But just as the finishing line looms into view, Sally’s eyes snap open, only for her to realise that she’s not on a point-to-point course at all.

Rather, the mother of two is standing on her bed, the sheets scrunched up on the mattress and pillows scattered across the floor. 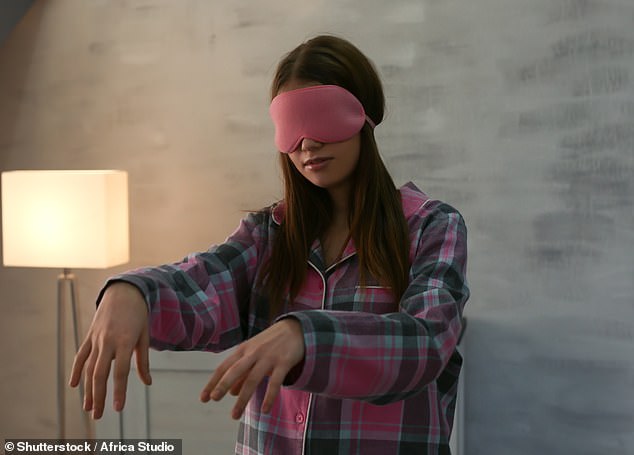 Lining up with fellow competitors in the point-to-point race, Sally Jones tries to calm her restless horse as they wait for the starter’s orders [File photo]

Sally’s hands are balled tightly into fists, still clutching on to reins that don’t exist.

This is no one-off — for Sally, 66, the horse-race experience has been repeated in her sleep ever since she was a teen.

‘It’s odd,’ says Sally, a media consultant, who lives with her retired husband John, 81, in Warwick. ‘I wake up in a state of confusion. My heart is pounding and I’m breathing fast.

‘But then I get a terrible wave of disappointment having realised that I didn’t win and it wasn’t real.

‘In reality, I’m standing on my bed, cold from having thrown off the sheets. It makes me feel really foolish — though I’ve never sought help for it. I’m just lucky we have a low bed, otherwise I could have a nasty accident.’

Sally is not alone. Parasomnia — the term for unusual behaviour related to sleep — affects 15 per cent of people in the UK. It can range from relatively harmless activities such as walking, talking and eating (people typically get up to cook) or, more rarely, sexsomnia — sexual behaviour while asleep.

Why some people have one kind of parasomnia rather than another is not clear, and some people may have more than one. In rare cases, it can be an early warning sign of a neurological condition such as Parkinson’s disease. 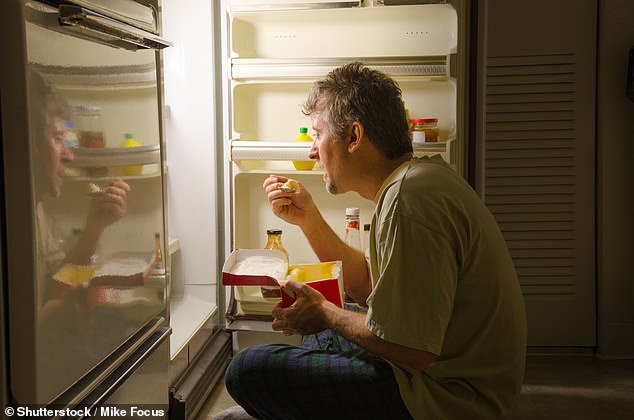 Parasomnia — the term for unusual behaviour related to sleep — affects 15 per cent of people in the UK. It can range from relatively harmless activities such as walking, talking and eating (people typically get up to cook)

However, in many cases it is triggered by disturbed sleep — and with half the population saying their sleep has been more disturbed than usual since lockdown began, this could lead to a rise in these nocturnal events.

‘During sleep, the brain moves through different stages, one of which is known as rapid eye movement (REM) sleep,’ explains Michael Oko, a consultant ear, nose and throat surgeon from United Lincolnshire Hospitals NHS Trust, and founder of the Sleeping Disorders Centre in London.

‘It’s at this stage the brain should temporarily sever communication with skeletal muscles, which means that while we are asleep we are essentially paralysed, otherwise we would all act out our dreams.

‘However, when there’s a fault in the control of this mechanism — sometimes random, or perhaps due to genetics or health issues such as sleep apnoea or even Parkinson’s — there’s scope for physical behaviour in sleep.’

REM happens when we are deeply asleep — so parasomnia tends to occur in the small hours or early morning.

But more complex parasomnia behaviour, such as sleep-related eating disorders, happens in the deep non-REM stage.

This forms about 25 per cent of our sleep and tends to happen shortly after we fall asleep, explains Guy Leschziner, a professor of neurology and sleep medicine at Guy’s Hospital in London.

‘In non-REM sleep some parts [of the brain] are in deep sleep and others are actually awake. The parts that are deeply asleep tend to be the frontal lobe — involved in rational planning — as well as the hippocampus, associated with memory. But the parts that are awake are the ones responsible for vision and emotion.

‘When there is a disruption to deep sleep — either because it’s not as deep as it should be or because something disturbs it, such as a ringing phone — this can trigger parasomnia.’

But the day’s events can also make parasomnia more likely, with stress and anxiety having an impact, says Stephanie Romiszewski, a sleep physiologist who runs the Sleepyhead Clinic in Exeter.

‘People who are more predisposed to having these sleep problems find they occur more regularly as their stress is heightened, such as over lockdown.’

Kim Johnson, 33, a freelance writer and mother of five from East Sussex, finds her episodes of strange sleep behaviour happen when she is anxious — usually about three or four times a year. ‘When my eldest was very little, I rearranged my bedroom in my sleep,’ she says. 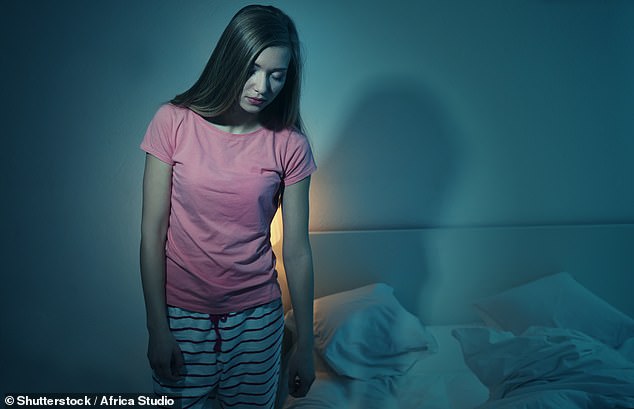 REM happens when we are deeply asleep — so parasomnia tends to occur in the small hours or early morning. But more complex parasomnia behaviour, such as sleep-related eating disorders, happens in the deep non-REM stage

‘My ex-husband woke up to find that he didn’t know where anything was as I had moved his clothes. More recently, I ran a bath in my sleep, which I discovered in the morning. Thankfully, I must have remembered to turn the water off, otherwise the house would have flooded.

‘I have found that occasionally I write notes in my sleep. Although they don’t make much sense, I have started to keep a notebook at the side of my bed. One night I just wrote the word “cheese”. I don’t worry about it, and my husband is used to it.’

Cathy Hayward, 45, a historical novelist from Brighton, says her episodes of sleepwalking were especially bad when she was pregnant with her three children (now aged 18, 13 and 11).

‘I used to regularly find myself naked outside in our back garden watering the plants,’ she says.

‘The sleepwalking is always linked to some caring-type responsibility I’ve forgotten to do: I’ve found myself in the kitchen looking for the fish bowl because I’ve dreamt that I forgot to top up the fish water and the fish are dying — we don’t have fish.

‘It’s all a bit strange, but I’ve never tried medical treatment. I didn’t think it would work.’

Professor Leschziner says parasomnias aren’t inherently harmful, but the concern comes when they significantly affect a partner’s sleep or the behaviour poses a danger to themselves or others.

‘It may help to check windows and doors are locked before you go to bed, and that objects such as bedside tables are moved to limit hurting yourself,’ he says.

For the parasomniac themselves, he adds that improving the quality of sleep can be helpful. For example, they could cut out alcohol, which can disturb sleep.

Heather Darwall-Smith, a psychotherapist at The London Sleep Centre, says having a proper sleep routine will also be beneficial.

‘Wake up at the same time every day, exposing your eyes to light to signal to your body it’s time to wake up. Have a wind-down period in the evening, and go to bed when you are actually tired rather than forcing or avoiding sleepiness,’ she says. ‘This all helps ensure you get good-quality deep sleep.’

As for Sally, she has accepted her nocturnal horse-riding. ‘I’m lucky in that it doesn’t disturb my sleep,’ she says.

‘John wakes up around 6.30am and goes downstairs to make us tea. I drift back to sleep and it’s then that I seem to have the horse-racing dream. It must happen very quickly because by the time he’s back up the stairs I’m already tidying up the bed.

‘He thinks it is hilarious — albeit rather strange. I learnt to ride aged seven and sometimes borrow a neighbour’s horse. But I’ve never done point-to-point. I hope one day I actually dream that I win.’

Whether you’re vacuuming, sweeping, or just walking between rooms, use it as a chance to lunge and build up your leg strength.

‘Lower the body down under control into a lunge position, with the front knee roughly at a right angle. The heel of the back leg will lift to allow the lunge action. Keep knees in line with toes and your front heel to the floor. Stay in position for a few seconds, then push through your thighs and drive upwards, returning to the start position.

‘Step the other leg forward and off you go. Repeat as you work.’

Storm in a teacup: The downsides of hot drinks

This week: They can cause ulcers.

‘If you have sensitive skin or are prone to ulcers, this will become inflamed as a result of the heat and an ulcer [essentially a sore] will form.’

Avoiding acidic or spicy food, which can further irritate the problem, will limit pain as well, as you’ve exposed the nerve endings. Applying ice directly to the area may ease pain and inflammation, too.

Other treatments to speed up healing include Iglu Rapid Relief Gel. This forms a gel coating to protect the sensitive area of the mouth lining from irritants as it heals while allowing the active ingredients to work. It also contains an anaesthetic to help with the pain.