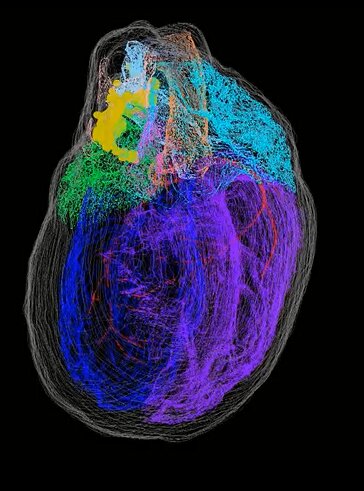 Mapping the neurons of the rat heart in 3-D 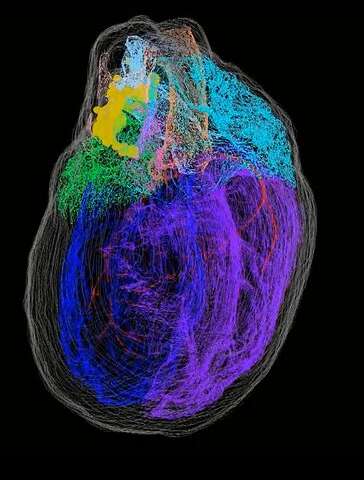 An interdisciplinary team of researchers has developed a virtual 3-D heart, digitally showcasing the heart’s unique network of neurons for the first time. Using the rat heart as a model, the investigators in this study—appearing May 26 in the journal iScience—created a comprehensive map of the intrinsic cardiac nervous system (ICN) at a cellular scale. This map allows for gene expression data to be superimposed within it, which can help determine the functional role that specific neuron clusters play. The researchers say this map will allow neurologists and cardiologists alike to more precisely study the neuroanatomy of the heart and lays the groundwork for developing virtual maps for other major organs.

While people normally associate neurons with the brain, they play important roles in other organs as well. “Many cardiologists aren’t even aware there are neurons in the heart, let alone that they are critical to heart health,” says senior author James Schwaber, director of the Daniel Baugh Institute for Functional Genomics and Computational Biology at Thomas Jefferson University. With the newly developed virtual framework, scientists can study the organization and function of the heart’s neurons at an unprecedented level of detail. “By using this 3-D reference space, we can build a comprehensive picture of the heart’s structure which is foundational to address various health concerns.”

The 3-D model is made possible by interweaving imaging, collection, anatomical mapping, and gene expression techniques. First, a diamond knife is used to create fine slices throughout the length of the heart, where microscopic images and tissues samples are taken at each cut using 3Scan software. These images are used to create the base of the 3-D reconstruction. In parallel, laser capture microdissection is used to remove individual neurons from the collected samples, while recording their precise placement within the heart’s anatomy. Researchers then used single-cell transcriptomics to determine the gene expression profiles of each of these collected neurons. Once all the data are collected, they are fit onto the 3-D model to create a comprehensive picture of the heart’s neural network. 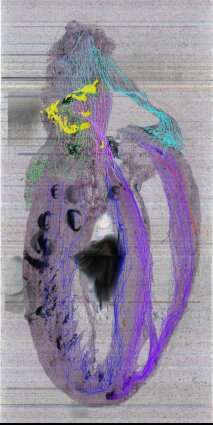 “With the spatial mapping of the gene expression, we can begin to discuss the precise roles that these neurons play. Do separate clusters of the ICN neurons have different functions, or do they work into an integrated way to influence heart health? Now we can address these questions in way that wasn’t possible before,” says co-author Zixi Jack Cheng, a cardiovascular anatomist and physiologist from the University of Central Florida College of Medicine.

The map revealed a consistent spatial pattern of the intrinsic cardiac nervous system moving from the top to the bottom of the heart. And although the 3-D map was constructed using the hearts of rats, the researchers say the protocols generated to create it will likely have long-term impacts on human medicine. For instance, some cases of severe heart disease have been reversed or remediated by stimulating the vagus nerve—though it is unclear why this treatment is effective in some patients and not others. “Evaluating these cardiac neurons from an anatomical and molecular perspective may help us better understand their function and develop therapies that can produce these protective effects of the vagus nerve onto the hearts of more patients,” says co-author Jonathan Gorky, a recent MD/Ph.D. graduate from Thomas Jefferson University and medical resident at Massachusetts General Hospital.

“Now that we have a comprehensive map of the heart, the way we pursue bioelectronic medicine will significantly change as we have information available at a level of resolution that just wasn’t accessible before this,” says co-author Rajanikanth Vadigepalli, a systems biologist with a chemical and control systems engineering pedigree at Thomas Jefferson University.

All the techniques and technologies used to create the atlas are made readily available through the Stimulating Peripheral Activity to Relieve Conditions program (SPARC), so other researchers can recreate and build upon the 3-D framework—whether it be with other animal hearts or with other organs such as the liver or lungs. “The SPARC program has created an online portal that allows other research teams to access our and other’s data, empowering them to understand, expand, explore, and contribute to how we think about the innervation aspects of each organ of the body. Thereby, we can start to create a community that extends beyond a single area of focus onto all the integrative aspects of the brain and body,” says co-author Susan Tappan, a developmental neuroscientist and the scientific director at MBF Bioscience.

A Running List of Every Festival, Sporting Event and Show Canceled or Postponed in the Wake of the Coronavirus
Recent Posts