Home » Khloé Kardashian Speaks Out After Unauthorized Photo's Release: 'How I Choose to Look Is My Choice' 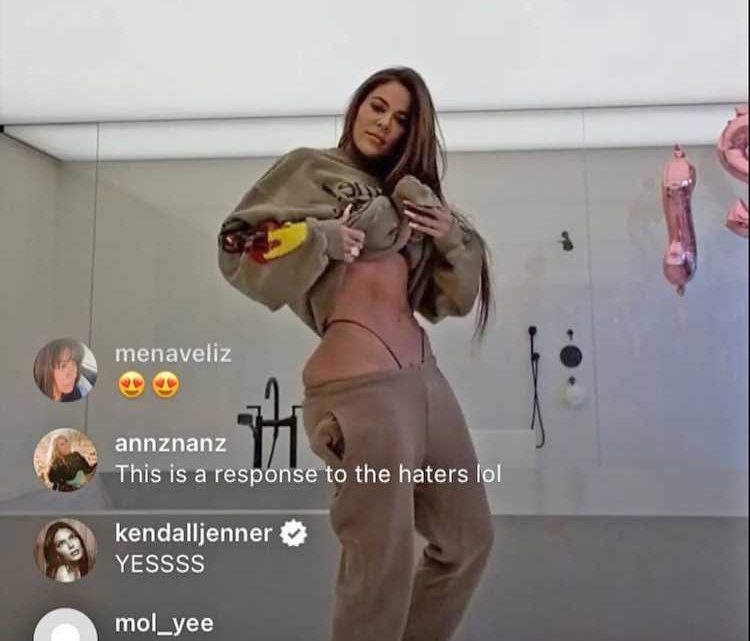 Khloé Kardashian Speaks Out After Unauthorized Photo's Release: 'How I Choose to Look Is My Choice' Khloé Kardashian is getting candid with her followers about her body image struggles after an unedited photo of her was posted to social media earlier this week without her permission.

In an Instagram post Wednesday, the Keeping Up with the Kardashians star, 36, shared unedited photos and video of herself as she opened up about trying to learn to love herself despite the "unbearable" scrutiny she faces.

"Hey guys, this is me and my body unretouched and unfiltered," she wrote. "The photo that was posted this week was beautiful. But as someone who has struggled with body image her whole life, when someone takes a photo of you that isn't flattering in bad lighting or doesn't capture your body the way it is after working to hard to get it to this point – and then shares it to the world – you should have every right to ask for it not to be shared – no matter who you are."

She continued, "In truth, the pressure, constant ridicule and judgment my entire life to be perfect and to meet other's standards of how I should look has been too much to bear."

RELATED: Khloé Kardashian Says Comments About Her Appearance Can Affect Her 'Soul and Confidence'

She then listed examples of unkind remarks that have been made about her: "'Khloé is the fat sister.' 'Khloé is the ugly sister.' 'Her dad must not be her real dad because she looks so different.' 'The only way she could have lost that weight must have been from surgery.'"

"You never quite get used to being judged and pulled apart and told how unattractive one is, but I will say if you hear anything enough then you will start to believe it," she added. "This is how I have been conditioned to feel, that I am not beautiful enough just being me."

Khloé said that, the same way she wears makeup or gets her nails done, she uses filters and photo edits to "present myself to the world the way I want to be seen," adding that "it's exactly what I will continue to do unapologetically."

She concluded, "My body, my image and how I choose to look and what I want to share is my choice. It's not for anyone to decide or judge what is acceptable anymore." The star's post was met with sisterly support with Kim Kardashian appearing in the Live with her and Kendall Jenner commenting 'YESSSS."

Last month, Khloé revealed how the online ridicule can take a toll on her after one of her fans posted a TikTok video in her defense following a slew of headlines comparing the star's looks over the years.

"I don't want anyone to kiss my ass. I'm not asking for that. But what I am asking for is for people to realize just what articles like this does to someone's soul and confidence," Khloé admitted.

"I am so very grateful and appreciative of anyone who stands up to bullying or people writing story's [sic] simply for clickbait. Defending someone, Especially when we don't know one another makes [my] heart happy. That's the person I am. I like to defend what is right. Thank you everyone for you sweet comments and thank you @mackincasey for being so kind 🙏🏽🙏🏽🙏🏽," the star continued, thanking the fan who posted the supportive TikTok video.

Khloé recently told PEOPLE that, with so much hate and negativity on social media, she tries to focus on spreading uplifting messages instead — and she has no plans on stopping anytime soon.

"I think the world right now, we have too much negativity at our fingertips. Just as much negativity, there is positivity, but we don't highlight it as much as we do the negative," she said.