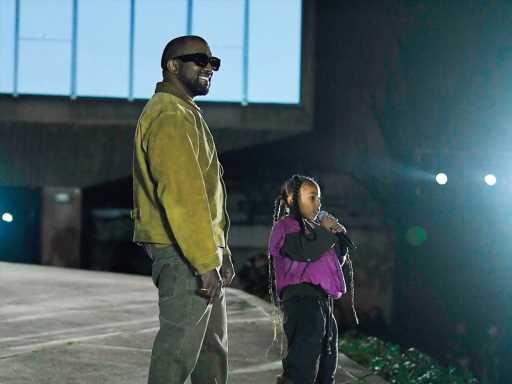 It’s no secret that Kim Kardashian and her ex Kanye West’s co-parenting relationship has had its fair share of ups and downs — actually, mostly downs. After getting banned from Instagram and Twitter for racist and antisemitic comments, Ye took to YouTube to start a vlog with a 10-minute video called “Last Week,” which features some of the rapper’s travels and daily life activities, including attending his daughter North’s basketball game. We’re not exactly sure what emotion Ye was trying to illicit by posting the video, because real talk: the family meeting at the basketball game looks awkward as hell.

The video, which starts with the viewer “selecting” their player (AKA Ye), mostly features fisheye footage of the rapper planning out his new fashion line following the fallout with Adidas and GAP. Around the 24-minute mark, we see Ye with North at her basketball game.

It appears that he gives North, who is sporting jersey #5, some advice on her game. “Show me what you got, let me see the skills,” he says as he records North dribbling an impressive crossover. It’s unclear whether this was the game where he elected to wear his controversial “White Lives Matter” t-shirt.

After some footage of North playing and cheering her teammates on from the sidelines, we see a hooded Ye talking to blond-era Kim, who looks annoyed — if not outright distressed — by something her ex-husband is saying. Unlike the rest of the footage, there is no audio for this portion of the vlog, making it all the more sus. Ye then walks away from Kim and goes to congratulate North on her game before leaving.

A couple of days before the vlog dropped, Ye did an interview with Tucker Carlson and said that he and Kim still had some details to iron out about co-parenting, namely where their children go to school.

“Right now we have a compromise,” he said, adding “but I’m not finished ’cause I don’t compromise.” Um, surprise surprise!

He had also posted a few posts on his Instagram berating Kim’s parenting choices. One post threatened to get the courts involved, with Ye captioning the post: “I was driven crazy before I’m not going crazy no more It’s not up to Calabasas or Hulu where my kids go to school.”

Kim has yet to make a comment on the video, but if it is anything like her thoughts on his “White Lives Matter” shirt, chances are they aren’t to praise Ye for his parenting skills.

These celebrity moms talk about raising their kids on their own.