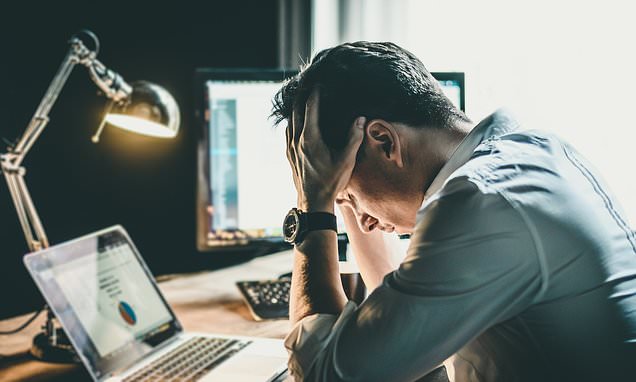 Just ONE night of bad sleep 'leads to Alzheimer's biomarker'

Pulling an all-nighter – even just once – causes a spike in levels of a protein in the brain thought to trigger Alzeihmer’s disease, research warns.

A study of healthy men in their twenties found those who missed an entire night of sleep saw levels of tau shoot up by almost a fifth.

Scientists have long warned of the link between poor sleep and the build-up of tau in the brain – a hallmark of Azleihmer’s.

But the Swedish researchers behind the study were shocked by how damaging just one night of sleeplessness could be.

They said their research should serve as a warning to students and employees who stay up all night to finish a work or university project. 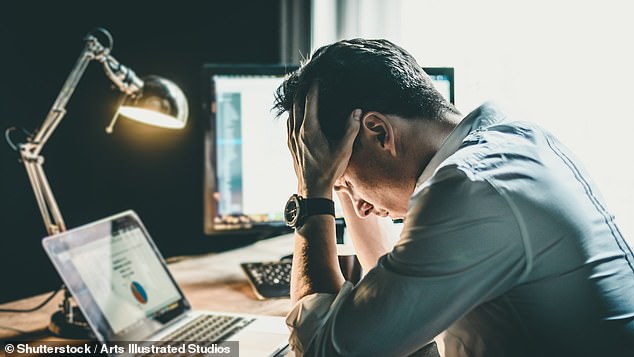 Researchers are warning employees and students against pulling an all-nighter to complete a project. They found a night of sleeplessness causes a spike in levels of a protein in the brain thought to trigger Alzeihmer’s disease (stock)

But further trials are needed to confirm the link, as the small study did not test whether tau levels went back to normal once participants went back to their regular sleep pattern.

The body flushes away plaques in the brain while people sleep, but a lack of shut-eye robs it of the chance to do so.

Charities say it is currently unknown whether short-term spikes in tau can raise the risk of developing Alzeihmer’s.

Clumps of tau in the brain, called tangles and plaques, disrupt the functioning of brain cells and eventually kills them.

Alzheimer’s disease is a progressive, degenerative disease of the brain, in which build-up of abnormal proteins causes nerve cells to die.

This disrupts the transmitters that carry messages, and causes the brain to shrink.

More than 5 million people suffer from the disease in the US, where it is the 6th leading cause of death, and more than 1 million Britons have it.

As brain cells die, the functions they provide are lost.

That includes memory, orientation and the ability to think and reason.

The progress of the disease is slow and gradual.

On average, patients live five to seven years after diagnosis, but some may live for ten to 15 years.

Build-up of the harmful protein can start to develop decades before symptoms of the disease appear, such as memory loss.

Alzheimer’s affects more than a million people in Britain and 5.7million Americans. That number is expected to soar as people live longer.

In their latest study, researchers from Uppsala University in Sweden looked at 15 men with an average age of 22.

All participants reported regularly getting seven to nine hours of quality sleep per night.

The men were observed under a strict meal and activity schedule in a sleep clinic for two days and nights.

Blood samples were taken in the evening and again in the morning. Half of them were allowed to get a good night of sleep both nights.

The others were only allowed one good night of shut-eye. They were forced to stay awake all night the following evening.

Lights were kept on while participants sat up in bed playing games, watching movies or talking.

Researchers found that the men had an average 17 per cent increase in tau levels in their blood after a night of sleep deprivation, compared to two per cent after a good night’s rest.

Study author Dr Jonathan Cedernaes said: ‘Many of us experience sleep deprivation at some point in our lives due to jet lag, pulling an all-nighter to complete a project, or even doing shift work, working overnights or inconsistent hours.

‘Our exploratory study shows that even in young, healthy individuals, missing one night of sleep increases the level of tau in blood suggesting that over time, such sleep deprivation could possibly have detrimental effects.’

He added: ‘Such studies could provide key insight into whether interventions targeting sleep should begin at an early age to reduce a person’s risk of developing dementia or Alzheimer’s.’

But she pointed to a number of limitations, adding: ‘This study included a small number of young men who usually slept well and so we do not know what the results mean for women, people who regularly do not sleep well, or older people.

‘The researchers only compared levels of tau after one night of bad sleep, so it is not clear if these short-term changes are relevant to someone’s risk of developing Alzheimer’s disease.

‘While this research is in its early stages, we do know that sleep is important for our general health, and there are also steps that people can take to reduce their risk of dementia.

‘Keeping mentally and physically active, maintaining a healthy weight, not smoking, only drinking within recommended guidelines, eating a healthy diet, and keeping blood pressure and cholesterol in check can help to support brain health as we age.’

The findings were published in the journal Neurology.