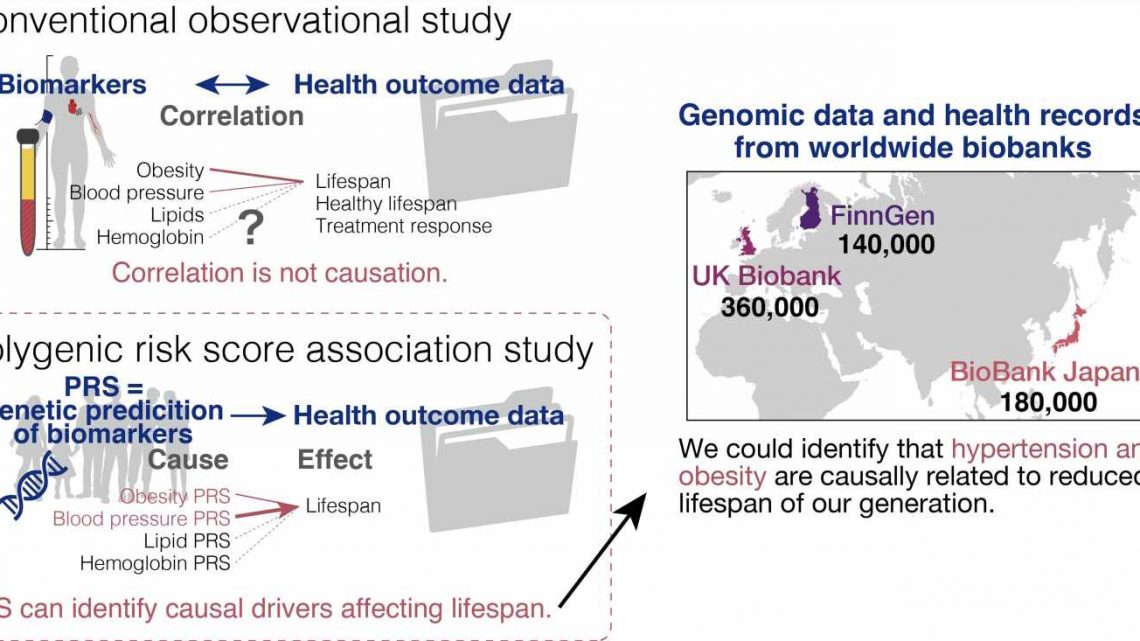 It’s in the genome: Uncovering clues to longevity from human genetics 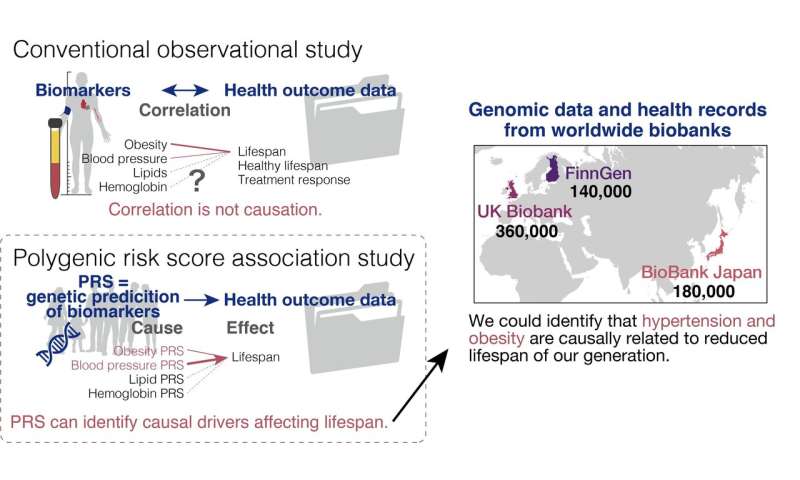 Researchers from Osaka University have found that high blood pressure and obesity are the strongest factors reducing lifespan based on genetic and clinical information of 700,000 patients in the U.K., Finland and Japan. These findings could be exploited to develop novel medical treatments to improve population health.

The genetic code within DNA has long been thought to determine whether one becomes sick or resists illnesses. DNA contains the information that makes all cells that compose our bodies and allows them to function. Part of DNA is composed of genes, of which proteins are produced that participate in virtually every process within our cells and organs. While variations in the genetic code determine biological traits, such as eye color, blood type, and risk for diseases, it is often a group of numerous variations with tiny effects that influence a phenotypic trait. Harnessing a huge amount of genetic and clinical data worldwide and a methodological breakthrough, it is now possible to identify individuals at several-fold increased risk of human diseases using genetic information.

While a risk stratification based on genetic information could be one potential strategy to improve population health, a major challenge lies in that the genetic code itself cannot be modified even if there is a known increased risk of a particular disease. In a new study, researchers from Osaka University discovered that individuals who have a genetic susceptibility to certain traits, such as high blood pressure or obesity, have a shorter lifespan. “The genetic code contains a lot of information, most of it of unknown significance to us,” says corresponding author of the study Yukinori Okada. “The goal of our study was to understand how we can utilize genetic information to discover risk factors for important health outcomes that we can directly influence as health care professionals.”

To achieve their goal, the researchers analyzed genetic and clinical information of 700,000 individuals from biobanks in the UK, Finland and Japan. From these data, the researchers calculated polygenic risk scores, which are an estimate of genetic susceptibility to a biological trait, such as a risk for disease, to find out which risk factor causally influences lifespan.

“Biobanks are an incredible resource,” says lead author of the study Saori Sakaue. “By collaborating with large biobanks in the UK, Finland and Japan, we not only had access to large amounts of data, but also to genetically diverse populations, both of which are necessary to make clinically meaningful conclusions.”

The researchers found that high blood pressure and obesity were the two strongest risk factors that reduced lifespan of the current generation. Interestingly, while high blood pressure decreased lifespan across all populations the researchers investigated, obesity significantly reduced lifespan in individuals with European ancestry, suggesting that the Japanese population was somehow protected from the detrimental effects obesity has on lifespan.

“These are striking results that show how genetics can be used to predict health risks,” says Okada. “Our findings could offer an approach to utilize genetic information to seek out health risk factors with the goal of providing targeted lifestyle changes and medical treatment. Ultimately, these approaches would be expected to improve the health of the overall population.”