Home » Health News » How to live longer: The vegetables that could ward off heart attacks and strokes – study 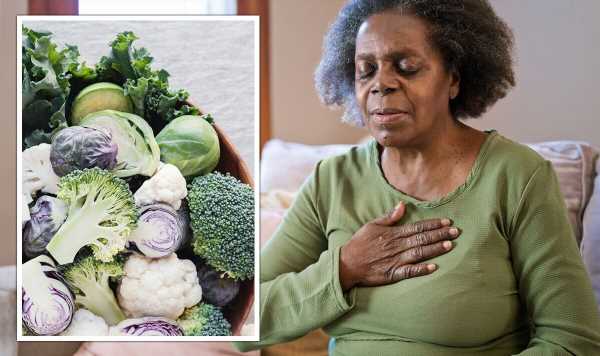 How to live longer: The vegetables that could ward off heart attacks and strokes – study

What's the difference between a heart attack and cardiac arrest?

A study into cruciferous vegetables, which include dinner mainstays like cauliflower, broccoli and Brussels sprouts, has shown consuming three or more portions of the plants reduces the hardening and narrowing of your arteries, also known as atherosclerosis. This is the most common cause of heart attacks, strokes, and peripheral vascular disease. As part of the study, researchers from the University of Western Australia, compared the health of women aged 70 and above who were eating different amounts of the vegetables.

The paper, which was published in the Journal of the American Heart Association, said: “Cruciferous vegetables are recognized to be a good source of several nutrients and bioactive phytochemicals.

“If supported by other studies, dietary guidelines should highlight the importance of increasing consumption of cruciferous vegetables for protection from vascular disease.”

To collect the data, the team carried out common carotid artery intima-media thickness tests (CCA-IMT) on more than 950 subjects.

“In a cohort of older Australian women, a higher intake of vegetables (225 or more grams a day in comparison to less than 150 g/d) was associated with an approximately five percent lower common carotid artery intima‐media thickness,” it says.

“Cruciferous vegetables, including cabbage, Brussels sprouts, cauliflower, and broccoli, contributed the most towards this beneficial effect.

“Other vegetable types were not associated with CCA‐IMT.”

According to the NHS, atherosclerosis is a “potentially serious condition” where arteries become clogged with fatty substances called plaques, or atheroma.

It explains: “These plaques cause the arteries to harden and narrow, restricting the blood flow and oxygen supply to vital organs, and increasing the risk of blood clots that could potentially block the flow of blood to the heart or brain.

“Atherosclerosis does not tend to have any symptoms at first and many people may be unaware they have it, but it can eventually cause life-threatening problems, such as heart attacks and strokes, if it gets worse.”

Along with heart attacks and strokes it can also cause coronary heart disease, angina and transient ischaemic attacks.

Other conditions, including high blood pressure, high cholesterol and diabetes are linked.

Cruciferous vegetables – from the brassica family – are unique to other foods because they are rich sources of sulphur-containing compounds known as glucosinolates.

When they are cooked and eaten, the glucosinolates break down into biologically active compounds, including phytochemicals that are thought to “slow the progression of atherosclerosis”.

And other studies suggest certain indoles and isothiocyanates, from the glucosinolates, may also reduce the risk of cancer.

Link between COVID-19 severity and microbiome of saliva and nasopharynx