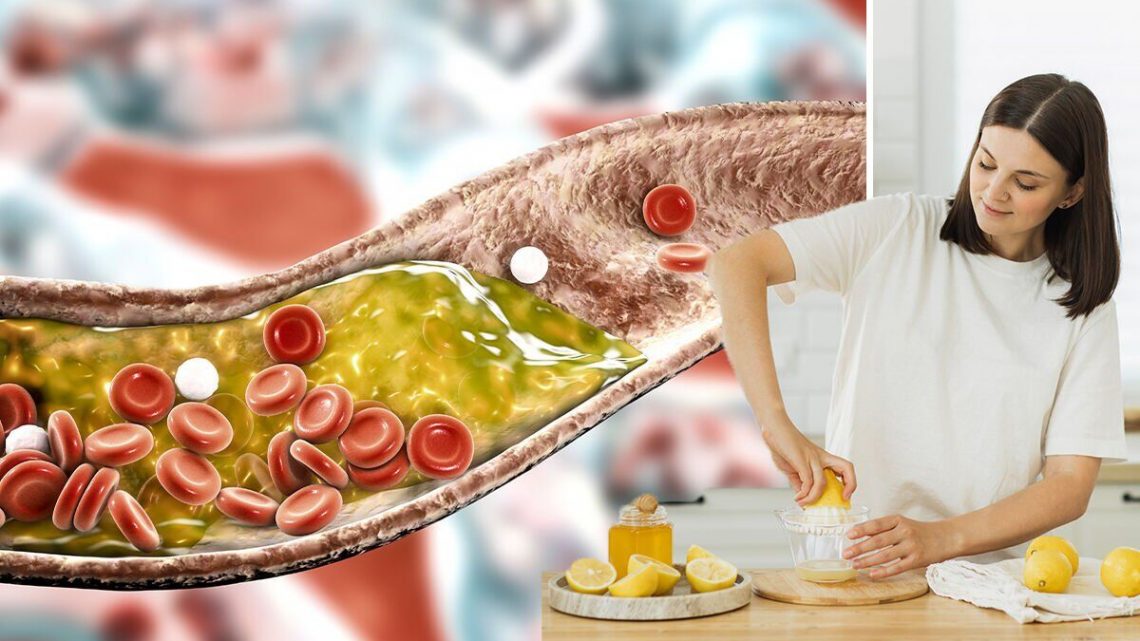 High cholesterol: The 35p drink you can make at home to ‘significantly’ lower levels

This Morning's Dr Chris discusses the signs of high cholesterol

Research has revealed that a simple mix of garlic and lemon juice could ‘significantly’ reduce cholesterol levels. Having high cholesterol levels means there is too much fat – or lipids – in the blood vessels. This can cause blockages in the vessels, ultimately leading to heart problems or strokes.

The study, by academics at the Isfahan University of Medical Sciences in Iran, found a combination of the two “resulted in an improvement in lipid levels and blood pressure of people with hyperlipidemia”.

To reach their findings the team recruited 112 patients – aged between 30 and 60 – with high cholesterol and divided them “randomly” into four groups.

The third group received one tablespoon of lemon juice daily, but the fourth had neither.

Control blood samples were taken and height, weight, and blood pressure were recorded at the start and end of the trial.

The paper, which was published in the International Journal of Preventive Medicine, explains: “Results showed a significant decrease in total cholesterol, low-density lipoprotein-cholesterol, and fibrinogen in the group one, in comparison with other groups.

“A greater reduction in systolic and diastolic blood pressure was observed in group one compared with the groups three and four respectively.

“Furthermore, a great reduction in body mass index was observed in the mixed group compared with the lemon juice and control groups.”

Within the study raw garlic was used as “there is some evidence that garlic powder does not lower cholesterol levels”.

A single lemon at supermarket Asda costs 13 pence, while a single bulb of garlic is 22p – meaning the drink can be made at home for just 35p.

The paper concludes: “A combination of garlic and lemon juice resulted in an improvement in lipid levels and blood pressure of people with hyperlipidemia.

“Further studies to determine the appropriate doses of garlic and lemon juice for these patients are warranted.”

According to the NHS, more than two in five people in England have high cholesterol.

And around 6.5 million adults in England are currently taking lipid-lowering drugs such as statins.

However, you are more at risk if you eat a lot of fatty foods, don’t exercise enough and if it runs in the family.

Smokers and drinkers are also more at risk.

It can be lowered by a change in lifestyle.

The NHS recommends cutting out or avoiding the factors that put you at risk.

Other foods that are proven to help lower cholesterol include oily fish, like mackerel and salmon, brown rice, bread and pasta, nuts and seeds, and fruits and vegetables.