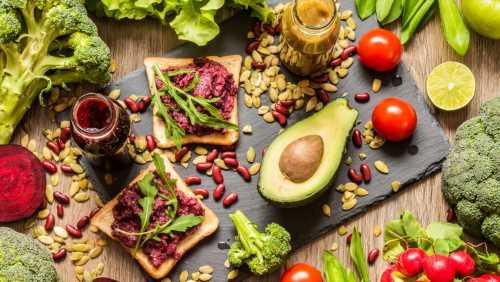 Healthy plant based breakfast ideas for 2020

Plant-based breakfast options don’t have to be limited to just oatmeal or yogurt. According to the Vegan Society, interest in leading an animal product-free lifestyle grew seven-fold in the years between 2014 and 2019, and it appears as if that trend is going to continue into the new decade.

As the number of vegan-curious eaters interested in switching to a vegan or plant-based diet increases, so, too, do the menu options. Dairy- and egg-free baked goods, meat-free tacos and breakfast sandwiches, and even a tasty seed-based breakfast pudding are some of the plant-based breakfast treats you may be enjoying in 2020.

While avocado toast is all well and good, sometimes you want something sweet for breakfast. One of the simplest things you can make is just a slice of toasted whole-grain bread, slathered with almond butter. On its own, it’s a protein-packed power boost, but you can top your almond butter toast with fresh berries, sliced bananas, toasted coconut, honey, maple syrup, or jam for a tasty morning treat.

A Couple Cooks suggests you can even make your own almond butter — all you need are toasted almonds and a food processor. They warn that it will take approximately forever for the crumbly almond bits to transform into anything remotely butter-like, but then… one more whiz, and suddenly you’ve got something perfectly smooth, creamy, and spreadable.

These magical little cinnamon bites are not only plant-based but semi-raw (the only “cooking” involves oven-drying instead of using a food dehydrator) — and, of course, they’re naturally gluten-free. The recipe from the Feasting on Fruit blog calls for slicing “spotty” bananas into long strips, oven-drying these strips, spreading them with pureed dates and sprinkling with cinnamon before rolling into spirals and then returning to a low-heat oven for further drying.

They may not exactly be Cinnabons, but then, they also don’t pack in a whopping 880 calories and 37 grams of fat per bun.

Move over, breakfast burritos, it’s time to let the breakfast taco be a thing. They’re smaller, made with gluten-free corn tortillas instead of flour ones, and you can fill them with pretty much whatever you like. Beans, stir-fried veggies, raw veggies, soy or nut-based cheese…any or all of the above.

Ambitious Kitchen has a recipe for breakfast tacos filled with scrambled tofu — which, they assure the vegan-curious newbie, takes on the taste of the spices it’s cooked with and has a texture that is very similar to that of fluffy scrambled eggs.

Oh, and one more fun fact about breakfast tacos — they’re one of the tastiest ways to cure a hangover!

Although the very name of the Eating Bird Food blog seems to poke a little fun at the main ingredient of this dish — seeds — they nevertheless describe it as “creamy, satisfying and loaded with protein, fiber and omega-3s” as well as being gluten-free, paleo, and keto-friendly in addition to being vegan. Wow, what more could you ask for in a breakfast dish?

How about easy to prepare? Well, it’s that, too. All you do is stir about a quarter cup of chia seeds into a cup of non-dairy milk of your choice (almond, cashew, coconut, etc.). If you like, you can add a little maple syrup, honey, or your sweetener of choice, and you can also mix in a quarter teaspoon of vanilla for a little added flavoring — the seeds themselves have no flavor, so they will just taste of the milk and anything else you add.

You’ll then need to let it set up for a few hours (overnight will work, too). Once the seed/milk mixture has turned into pudding, top it with fresh berries. This delicious, nutritious one-cup breakfast sure makes a nice change from yogurt.

Even the most dedicated plant eater might occasionally get a craving for a forbidden food — and, more often than not, that banned food will be bacon. Well, the Minimalist Baker blog is here to help you resist falling off the plant wagon (or the turnip truck) with their recipe for a smoky, crispy, salty, chewy “fake-on” made from… eggplant?

Yes, it turns out that thin-sliced, oven-dried eggplant strips that have been marinated in a mixture of tamari, liquid smoke, (vegan) Worcestershire sauce, maple syrup, and spices taste amazingly bacon-like and, according to the bloggers, is “insanely delicious.”

Perhaps the most game-changing recent entry into the plant-based breakfast market has got to be “Impossible Pork,” which will soon be making its debut in the form of the “Impossible Sausage” at Burger King restaurants nationwide. Although the “Impossible Croissan’wich” won’t be exactly vegan, containing, as it does, both eggs and cheese, a successful launch is likely to lead to the availability of the Impossible Sausage in grocery stores.

According to Fast Company, this product provides nutritional benefits as it has as much protein as you’ll find in regular sausage, but has more iron and also doesn’t have nearly the amount of cholesterol, fat, or calories that you’ll find in a regular Croissan’wich.