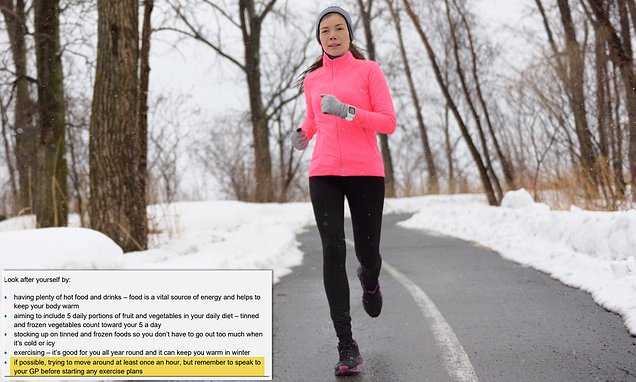 GPs have slammed ‘absolutely ridiculous’ official guidance that tells patients to contact their family doctor before exercising this winter.

The measure was included in the ‘Cold weather plan for England’ an official Government document on how to keep Britons healthy during the winter season.

In its ‘main public health messages’ section it bizarrely asked the public to ‘speak to your GP’ before starting any exercise this winter.

While acknowledging that exercise is ‘good for you all year round’ and it can help keep people warm, the advice states people should speak to their family doctor before doing so.

‘If possible, trying to move around at least once an hour, but remember to speak to your GP before starting any exercise plans,’ it reads.

GP groups condemned the advice today, saying it would add to the already stretched workload of family doctors as people called them up for permission to exercise.

Patient groups also joined the attack, telling MailOnline the prospect of calling up a family doctor before going for a brisk walk was ‘absolute nonsense’. 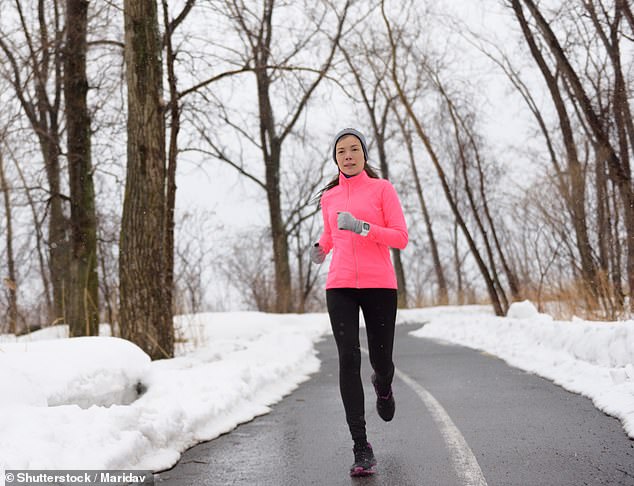 Going for a jog this winter? make sure you speak to your doctor first, according to ‘ridiculous’ advice from NHS England (stock image)

The NHS will recruit more than 1,000 ‘GP assistants’ so family doctors have more time to treat patients this winter.

They will free-up thousands of appointments by performing administrative tasks and basic health checks previously done by GPs.

Surgeries can now claim additional funding to take on the extra staff, who are not required to have a medical degree and will earn around £24,000 a year.

They will receive on-the-job training that allows them to take blood, administer jabs and measure patients’ blood pressure and heart rate.

Their help is expected to reduce the amount of time doctors spend writing and processing letters by almost half.

The new recruits will help patients with hospital referrals, explain treatments and act as a middleman with other health and care providers.

They may also take brief medical histories before patients see their GP.

Health Secretary Therese Coffey has made improving access to GPs one of her priorities.

Dr John Hughes, head of GP Survival, told Pulse: ‘It’s absolutely typical of the idiocy that comes out of NHS England from people who don’t understand what GPs actually do.’

‘Given the fact that people are likely to be trying to keep warm by exercising, there may well be a substantial increase in numbers presenting with this if people actually see this. It’s absolutely ridiculous.’

Britons are increasingly frustrated over continuing struggles to contact their GP, with thousands complaining they face daily battle to join telephone queues to try and get an appointment.

Dennis Reed, of Silver Voices, a campaign group for senior residents who have repeatedly voiced concerns over lack of GP access in the UK also criticised the ‘ludicrous’ advice.

‘We want to reserve appointments for people who have a real need for them,’ he said.

‘To suggest that they to talk to their GP before going for a brisk walk is absolute nonsense.’

The line about contacting a GP before exercising appears to have been included in last year’s guidance as well but has only sprung to attention after the plan was updated this week.

It comes a week after the latest data showed the proportion of people in England seeing their GP face-to-face rose to its highest level since the start of the pandemic.

Two-thirds of appointments with family doctors in England in August were in-person, according to the latest data from NHS Digital.

The 66.1 per cent figure is still well below the 80 per cent average before the pandemic struck.

However, it is the highest rate since March 2020, when the UK was plunged into its first national lockdown as Covid swept across the country.

Campaigners and the Government have long-demanded that GPs return to pre-pandemic levels.

Meanwhile, nearly half of appointments in August lasted less than 10 minutes in some practices — including some in Leicester, Nottingham and Suffolk.

Appointments are supposed to last 10 to 15 minutes, with an NHS review finding that patients feel they are unable to cover their health problems in a shorter timeframe.

It warned that this could lead to patients booking additional appointments, clogging up the availability of family doctors.

Two-thirds of appointments with family doctors in England in August were in-person, according to the latest data from NHS Digital. The 66.1 per cent figure is still well below the 80 per cent average before the pandemic struck. However, it is the highest rate since March 2020, when the UK was plunged into its first national lockdown as the coronavirus swept across the country 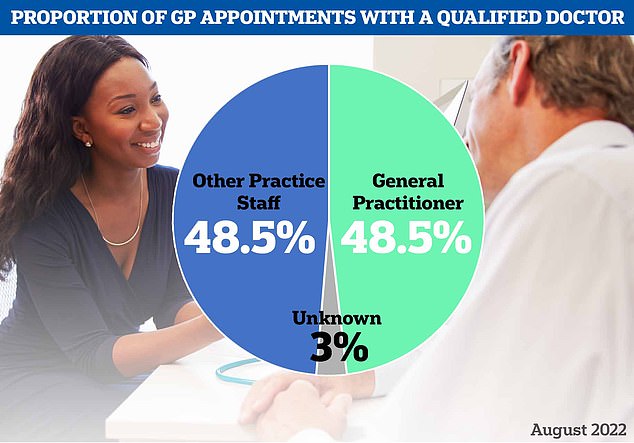 Some 48.5 per cent of appointments in August were with family doctors, while the same proportion were with other practice staff, such as nurses. The mode was not logged for three per cent of consultations

Addressing dissatisfaction with GPs has been one of the key targets of new Health Secretary Therese Coffey.

She said she expects all patients to be offered an appointment within two weeks and the sickest on the same day.

And today NHS England announced it will recruit more than 1,000 ‘GP assistants’ so family doctors have more time to treat patients this winter.

It is hoped they will free-up thousands of appointments by performing administrative tasks and basic health checks previously done by GPs.