So THAT’s why you always have room for pudding! Scientists prove ‘dessert stomach’ is real

For many of us, it is an all-too-familiar sensation: feeling fit to burst after a big meal but somehow finding room for dessert.

For those struggling to shift the pounds, there is at least some solace: it’s not just greed, it’s the way we have been hardwired.

In fact, ‘dessert stomach’ is a scientific fact, and it’s all because of something called sensory-specific satiety.

Put simply, it means that the more you eat of something, the less you like it, which gives you the impression that you are full. You are, however, only sated with that particular taste, texture or flavour. 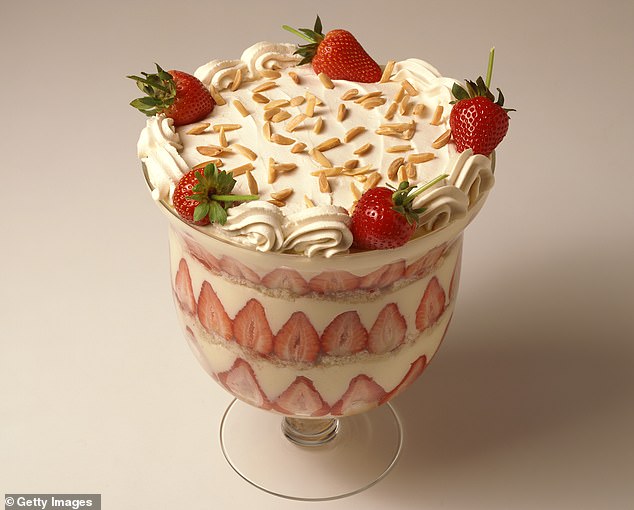 ‘Dessert stomach’ is a scientific fact, and it’s all because of something called sensory-specific satiety

‘The decline in pleasure you derive from food is specific to the food you have been eating, or other foods that are similar,’ says Barbara Rolls, a professor of nutritional sciences at Penn State University in the U.S., who has been researching this area for 40 years.

‘So, while you might lose your appetite for that food, a different food will still be appealing. That’s why you always have room for dessert.’

Professor Rolls has shown that food doesn’t just become less tasty as a meal progresses, it also looks, smells and feels less appealing. This encourages us to try something different.

The theory is that sensory-specific satiety evolved to keep us healthy. Limiting our appetite for one food and encouraging us to switch to another boosts the odds that we will get all the nutrients we need.

However, for dieters — especially those who liked to savour many courses — there are serious drawbacks. In one study, Professor Rolls showed that people ate 60 per cent more calories if given a meal with four different courses, rather than one in which all the courses were the same.

Evidence for this inbuilt mechanism dates back to a classic study from the 1920s, when a Chicago-based paediatrician allowed newly weaned babies to eat whatever they liked from a wide selection of foods.

Trays with little dishes — each containing a different food — were put in front of the babies’ beds. A nurse waited for the child to reach for, or point to, a dish before spoon-feeding them from it.

Some did become fixated on one particular food for a short period. But, as time went on, they all ate a well-balanced, varied diet, leading researcher Clara Davis to conclude that they must have been guided by ‘some innate automatic mechanism’.

It seems that sensory-specific satiety is that mechanism. 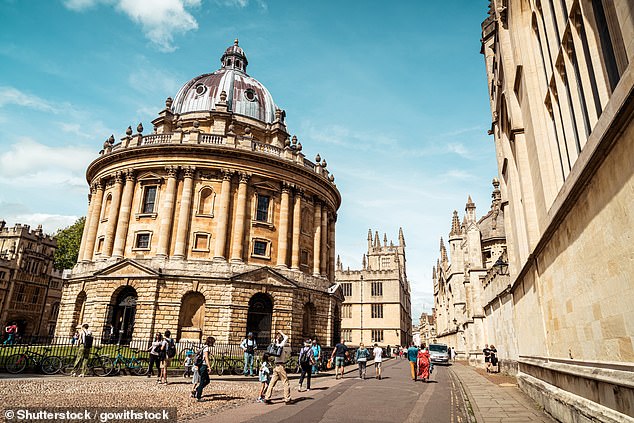 Experiments carried out by the University of Oxford (pictured) showed that cells in the brain’s reward centres, which produce feelings of pleasure, respond less to a food as it is eaten

The phenomenon of losing interest in one food but having room for another was neatly summarised by a recent experiment carried out by news website Vox, based on Professor Rolls’s past studies.

Volunteers were given a large plate of macaroni cheese and asked to eat until they were full.

They were then given a ‘dessert’ — of more macaroni cheese. They were asked to rate, out of ten, how interested they were in the meal, and the amount they ate was measured.

Their average level of interest in the macaroni began at 6.2 out of ten, before plummeting to 1.3 after their first course.

On average, they managed just one ounce of pasta for ‘dessert’, and by the time they had finished eating, their interest in macaroni cheese stood at just 0.2 out of ten.

The experiment was repeated another day, but the volunteers were given ice cream for dessert, rather than more pasta.

They were also quizzed on their interest in ice cream throughout the meal, which remained high while eating the macaroni. They ate three times more of this pudding than they’d eaten of the pasta ‘dessert’.

Sensory-specific satiety doesn’t only explain why dessert can be so hard to decline, it also sheds light on why it is so easy to overeat at a barbecue, buffet, or other occasions where there is a variety of food on offer.

Professor Rolls says the phenomenon is likely to make it harder for us to resist the huge range of foods available in today’s world, and so may be contributing to the obesity epidemic.

The biology underpinning sensory-specific satiety isn’t clear, but the answer may lie in the brain.

Experiments carried out by the University of Oxford showed that cells in the brain’s reward centres, which produce feelings of pleasure, respond less to a food as it is eaten.

However, if another food is then sampled, the cells become fully responsive again.

As for how to avoid gorging on dessert, Professor Jane Ogden, an expert in eating behaviour from the University of Surrey, has some very simple advice.

‘People talk about their “pudding stomach”,’ she says. ‘They’ve had enough of the main course and then something different comes along and, lo and behold, they can eat that.

‘If you are trying to lose weight, make puddings that aren’t calorific, such as a fruit salad, frozen yoghurt or figs.’

NHS hospitals are FULLER than they have been all winter