Linda Lusardi, 61, had an emotional interview detailing her harrowing experience when she was infected with COVID-19. The model described her “horrendous” battle she endured on Good Morning Britain earlier. Linda made a stark admission that she truly thought she was going to die from the deadly virus and went on to praise NHS staff for their tireless compassion and “giving her life back.” Linda was rushed to hospital after her symptoms grew increasingly worse, with one of her unusual symptoms being blue vomit.

Speaking to Piers Morgan and Susanne Reid, Linda said: “Two lady ambulance drivers came did some tests and I’d got zero oxygen in my blood and tested Sam and said his was really bad as well, my poor son watched as we were marched out of the door with paramedics.”

Explaining her husband’s condition, Linda said: “He was very very ill and I was looking after him, but I was sleeping in bed with him because we didn’t realise what he had actually got, and then I contracted it, and then he felt he was getting better and started looking after me.” 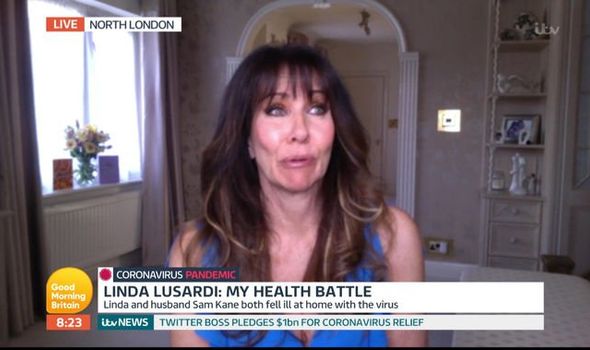 According to Linda, both were suffering from diarrhoea and both were vomiting.

“We called 111 at this point but were told to simply self-isolate.

“But when I started suffering with chest pains and breathlessness my son advised we contact the ambulance.

“Sam and I were both in A and E at the beginning and we just looked at each other and thought ‘are we going to make it through this?’.

I tested negative first of all and the doctor came in and he washed his hands and I asked him ‘am I going to make it through this?’.

“He said, ‘you’re 61 we don’t know what we’re dealing with.’ I texted Sam and said can you come up and see me because I don’t know if I’m going to make it through this.”

Linda had to be moved to intensive care at one point and was placed on a ventilator to help increase her oxygen levels.

“I was on 30 percent oxygen and on the fourth day they said, ‘I think you’ll have to go into intensive care’. It was absolutely horrendous.”

Linda discussed her initial symptoms to The Sun and said: “I started to get a fever, feeling rough and carried on, but it got worse and worse.

“Your head hurts, your brain hurts, and you feel like an elephant is sitting on you.”

Linda’s symptoms became so intense it left her unable to walk to the bathroom and had to crawl.

She also described how her vomit was a strange blue colour which she had never seen before.

It was the support from her husband that helped Linda get through her harrowing ordeal.

Linda continued: “Because he had tested positive and I tested positive by then, one of the workers downstairs wheeled him up and he held my hand and said ‘you need to think about the children they can’t lose their mum’.

“It helped. It helped me to be stronger.

“I thank God that I’m one of the lucky ones that came through it.”