Home » Health News » Coronavirus in the US: Map, case counts and news 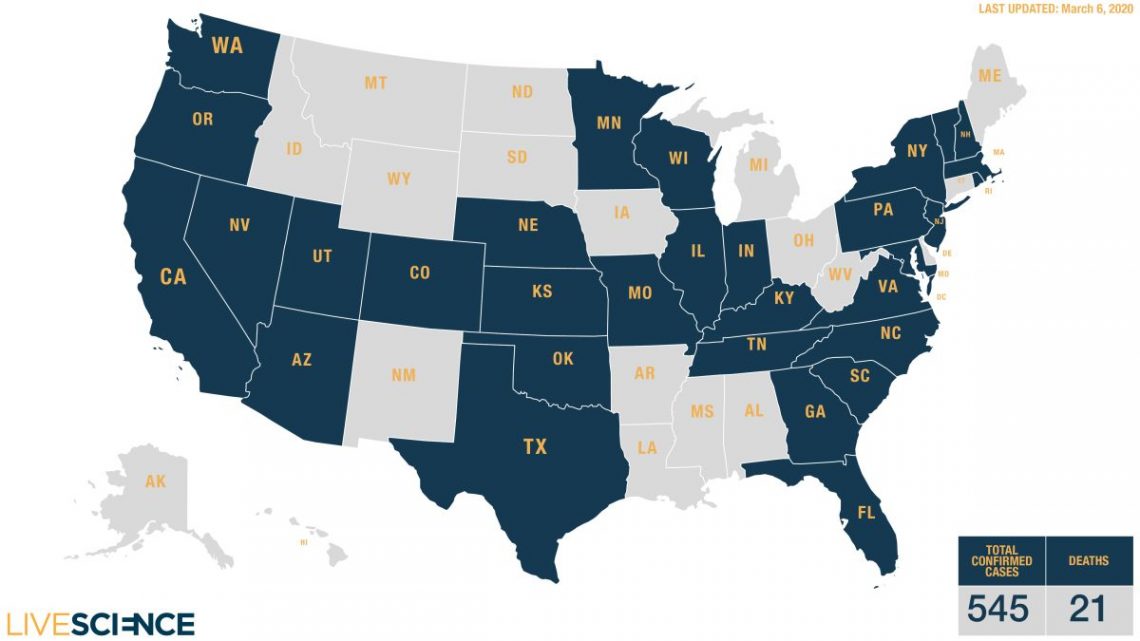 Coronavirus in the US: Map, case counts and news

A novel coronavirus called SARS-CoV-2 has spread to all continents except Antarctica, with the first U.S. case involving a 35-year-old man who had traveled to Wuhan, China, before returning to Washington State. He was confirmed to have the virus on Jan. 20, 2020. Since then, the virus (which causes the disease COVID-19) has spread to several states, with new cases emerging every day.

U.S. health officials announced they would send out test kits for as many as 400,000 people by the end of this week, with additional tests being sent out in the coming weeks, Reuters reported Thursday (March 5).

However, on Saturday (March 7), Dr. Stephen M. Hahn, FDA Commissioner, said that 1,583 people in the U.S. have been tested for COVID-19 through the CDC tests.

—What are the symptoms?

—How deadly is the new coronavirus?

—How does it compare with seasonal flu?

—How does the coronavirus spread?

—Can people spread the coronavirus after they recover?

There are now 123 cases in the state, mostly in King and Snohomish counties, outside of Seattle. Most of the cases have occurred at a long-care health facility called Life Care Center in Kirkland, Washington. Experts are not sure how the virus made its way into the center, which holds 190 beds, according to The New York Times.

In King County, 17 people have died from the virus, with another death from COVID-19 in Snohomish County.

The state’s health department has set up a hotline, which you can call to get your coronavirus questions answered: 1-800-525-0127.

There are now 124 confirmed COVID-19 cases in California, including 22 passengers aboard the Grand Princess cruise ship off the state’s coast. About 10,250 Californians are under self-quarantine, according to the SF Chronicle, meaning they think there’s a chance they were exposed to this novel coronavirus, so they’ve separated themselves from others in case they start showing symptoms. (Here are some tips for self-quarantine and self-isolation related to the coronavirus.)

On March 4, California Gov. Gavin Newsom declared a state of emergency in order to make additional resources available for combatting the virus. IN addition, that declaration will “formalize emergency actions already underway across multiple state agencies and departments, and help the state prepare for broader spread of COVID-19,” the governor’s office said in a statement.

Currently, there are 3,500 people onboard the Grand Princess cruise ship waiting to dock off Oakland on Monday (March 9). The passengers and crew have been stuck on the ship for days after individuals onboard tested positive for COVID-19. So far, 22 individuals on the ship have tested positive. A 71-year-old man onboard the ship became the state’s first reported death related to the coronavirus. He was a resident of Placer County, east of San Francisco, and reportedly had underlying health conditions.

New York state is reporting 105 confirmed COVID-19 cases, with 12 of those in New York City. Here’s a breakdown of cases by county:

The Manhattan case involves a woman who recently traveled to Iran and is now isolated in her home as of March 1. The second case in the state was reported on March 3 in a man who lives in New Rochelle, New York, in Westchester County and works in Manhattan. On Wednesday (March 4), Gov. Cuomo confirmed there were nine additional cases of people connected to the man, including his 20-year-old son, 14-year-old daughter and a neighbor who drove the man to the hospital, the Times reported. In addition, a friend of the infected man, along with the friend’s wife and three of their kids, according to the Times.

Diagnostic tests in US

After botching its initial attempt at a COVID-19 diagnostic test, and taking weeks to develop a replacement, the U.S. government has enlisted the help of private companies and academic institutions to expand the nation’s testing capacity, The New York Times reported. According to “the estimates we’re getting from industry right now, by the end of this week, close to a million tests will be able to be performed,” FDA commissioner Stephen Hahn said in a press briefing on March 2.

The week prior, the FDA enabled state and local laboratories to develop and validate their own diagnostic tests and conduct initial testing on their own, rather than sending samples to the CDC’s laboratory in Atlanta, according to the Times.

The CDC tests use a PCR-based protocol, meaning they pinpoint bits of viral DNA in swabbed samples from a patient’s nose and throat, according to The Scientist. Many of the other tests in development follow the same approach, but some labs aim to use the gene-editing technique CRISPR to highlight the target genes with fluorescent tags, The Scientist reported. Other groups are working to isolate antibodies from infected people in order to develop blood tests for the virus.

Dr. Stephen M. Hahn, FDA Commissioner, said that 1,583 people in the U.S. have been tested for COVID-19 through the CDC tests. Speaking on March 7, Hahn detailed how testing was unfolding in the U.S., including the number of tests being sent out to U.S. labs:

Hahn also clarified how test number equated to number of patients: “With current estimates (and this could change), 2.1 million tests would roughly translate to 850,000 Americans being able to undergo testing,” he said.

OFFER: Save at least 53% with our latest magazine deal!

With impressive cutaway illustrations that show how things function, and mindblowing photography of the world’s most inspiring spectacles, How It Works represents the pinnacle of engaging, factual fun for a mainstream audience keen to keep up with the latest tech and the most impressive phenomena on the planet and beyond. Written and presented in a style that makes even the most complex subjects interesting and easy to understand, How It Works is enjoyed by readers of all ages.
View Deal