People in their late teens and 20s who binge drink regularly may be able to blame their habit on the structure of their brain.

Researchers quizzed hundreds of European students on their drinking habits from when they turned 14 until age 23.

All of the volunteers had also gone through brain scans in adolescence to measure how their brains developed.

Adults were more likely to get very drunk more often in their early twenties if their grey matter shrunk from the age of 14 to 19.

King’s College London experts say drinking alcohol as teenagers does not cause the brain changes, as many academics believe.

Instead, they claim the results show grey matter begins to shrink in some youngsters before they touch their first drop of alcohol.

Grey matter is responsible for dependency and impulsive behaviour, the researchers said – but admitted what causes grey matter to shrink is still a mystery. 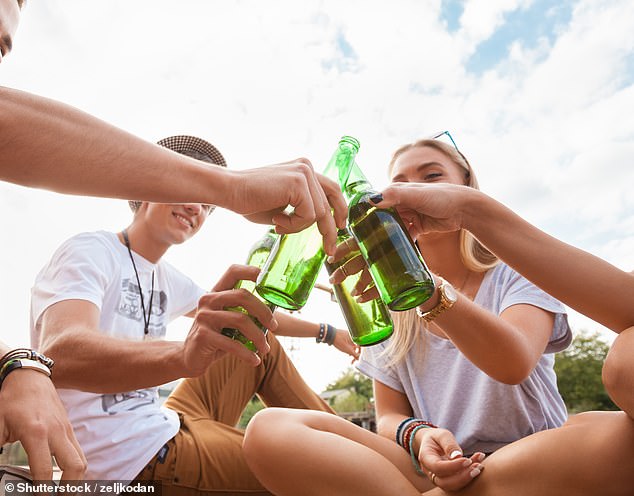 Young people who binge-drink more often ‘may be driven by changes in their brain structures from the age of 14’, a study using brain scans suggests

‘And this is also the time when individuals tend to start substance use so there is a longstanding debate about the causality between brain development, drug use and mental disorders.

HOW MUCH ALCOHOL IS ADVISED PER WEEK?

Men and women in the UK are advised not to drink more than 14 units a week on a regular basis.

One unit equals 10ml or 8g of pure alcohol, which is around the amount of alcohol the average adult can process in an hour.

A pint of strong lager contains 3 units of alcohol, whereas the same volume of low-strength lager has just over 2 units.

‘And, under given circumstances, this could result in an increased frequency of drunkenness.’

The 726 participants, from the UK, Germany, Ireland and France, had brain scans at the age of 14 and 19 years old.

They were tasked with reporting how often they experienced drunkenness in the last 12 months at the age of 14 years old, 16, 19 and 23.

‘Drunkenness’ is how severely intoxicated someone is based on behaviours such as staggering when walking, vomiting or not remembering what happened.

Those who had decreases in grey matter in the frontal and temporal regions got drunk more often through their late teens and as they reached 23.

The link was particularly strong for girls, according to the findings published in the journal JAMA Psychiatry.

The changes in brain structures do not necessarily indicate the young people’s health was at risk in any way, but show a distinction from their more sober counterparts.

Senior researcher, Professor Gunter Schumann said: ‘Brain changes in the frontal and temporal lobes might happen even before the onset of alcohol use.

‘This means claims teenage drinking will damage your brain are over-simplistic and do not reflect the complexity of the interactions.’

It will spark debate about whether heavy alcohol consumption causes changes in brain structure in adolescents or vice versa.

The study did not investigate if drinking heavily changed the brain structures of adolescents.

How does your skin change during menopause?
Recent Posts