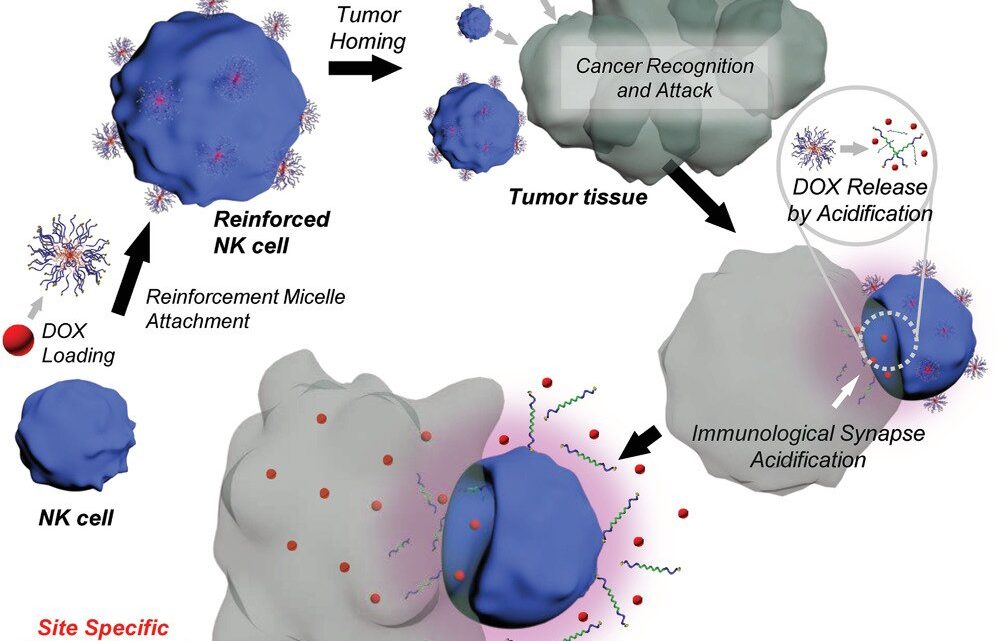 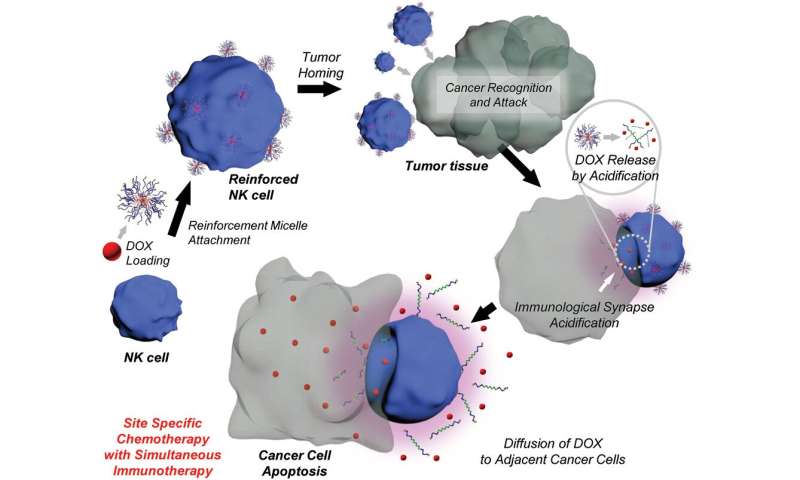 A research team led by Professor Won Jong Kim of POSTECH’s Department of Chemistry developed a treatment for solid cancers using the formation of natural killer-tumor cell immunological synapses through joint research with GI Cell. The research findings were published as a front cover for the latest online edition of Advanced Materials, a leading academic journal in the field of material science.

To date, three methods including surgery, radiation therapy, and chemotherapy are implemented to treat cancer. While surgery and radiation therapy are helpful in reducing the size of tumors in treating solid cancer, there is a high risk of recurrence due to residual or metastatic cells. The residual cells and metastatic cells are treated by administering chemotherapy to patients, but their use is limited due to serious side effects in all parts of the body.

However, there is a system in the human body that can distinguish cancer cells from normal cells and selectively induce their death, and using this mechanism in anticancer immunotherapy not only has fewer side effects but also a higher survival rate for patients compared to chemotherapy.

In particular, treatments using natural killer cells during chemotherapy have low side effects and are more effective in treating leukemia. However, unlike leukemia cells where individual cells float in blood, in solid cancers, the extracellular layer surrounding the cancer tissues reduces the penetration rate of the natural killer cells, thus lowering their efficacy. Studies are being conducted to overcome this issue.

It was also anticipated that cancer drugs could induce the death of cancer cells in the deep parts of the tumor as their size is small enough to penetrate the dense extracellular layer around the tumor tissues. In the treatment of solid cancer, the team fused the adoptive natural killer cell therapy and chemotherapy to overcome the low therapeutic effects and high side effects. They implemented a system that can release anticancer drugs only when natural killer cells recognize the cancer cells and induce their death.

In addition, video footage filmed using a confocal scanning fluorescence microscope confirmed that acidity was reduced in the immunological synapses formed between natural killer and cancer cells, and that the ReNK system selectively released anticancer drugs.

It also confirmed that the delivery efficiency to cancer tissues increased significantly when anticancer drugs were delivered using ReNK in animal models with solid cancer.

Slimming: How do you get rid of built-up Corona-pounds – Naturopathy naturopathy specialist portal
Recent Posts