Asfotase alfa in hypophosphatasia in childhood/adolescence: Survival benefit for infants 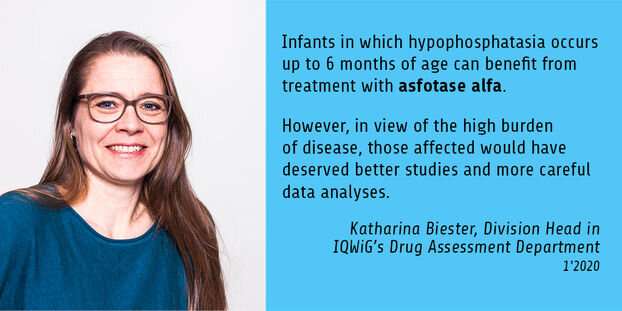 Hypophosphatasia (HPP) is a rare congenital metabolic disorder. The frequency of severe courses of disease is estimated at 1:100 000: A deficiency of the enzyme phosphatase results in insufficient mineralization of the bones and thus in severe skeletal malformations. The course of disease varies greatly—the earlier the onset of the disease, the more severe are symptoms and complaints. Affected infants in whom the disease occurs before the age of 6 months often die of it and at a very early age, whereas the symptoms are sometimes less pronounced when the disease occurs later.

A long-term enzyme replacement therapy with asfotase alfa (trade name Strensiq) is for the first time intended to treat the cause of the disease, i.e. the deficiency of the enzyme, in patients with HPP. Previously, symptomatic treatment was the only option. Being a drug for the treatment of rare diseases (orphan drug), asfotase alfa was initially excluded from scientific assessment of an added benefit. With annual sales exceeding 50 million euros, asfotase alfa had lost this special status and its added benefit was investigated with an early benefit assessment of drugs pursuant to AMNOG) by the German Institute for Quality and Efficiency in Health Care (IQWiG). The dossier assessment yields a hint of a non-quantifiable added benefit for infants in whom the disease occurred before the age of 6 months. Due to lack of data, advantages and disadvantages for other patient groups remain unclear.In its dossier, the drug manufacturer specified two single-arm studies on the treatment of infants with asfotase, which only consider two outcomes (overall survival and respiratory function). He compared their results with results from a few medical records of patients who had not been treated with asfotase. The observed differences in overall survival between the two comparator groups are so large that they cannot be attributed solely to the existing confounders: More infants are likely to survive under asfotase treatment than without it.

“Infants in which the disease occurs up to the age of 6 months are expected to benefit from treatment with the drug—better courses of treatment than before are possible. In view of the large burden of disease, particularly in children and adolescents, those affected would have deserved a better study situation and more careful data analyses,” says Katharina Biester, Division Head in IQWiG’s Drug Assessment Department.

The manufacturers’ dossier presents data from two small single-arm studies (2008-2016) involving asfotase alfa treatment of a total of 80 infants in whom the disease occurred up to the age of 6 months: 11 children were ? 36 months and 69 were ? 5 years old. The manufacturer compared the results with historical data on symptomatic treatment without asfotase alfa based on medical records of 48 infants with perinatal or infantile hypophosphatasia: At the time of data collection (2012-2013), 35 patients with medical records had already died and 13 were still alive. The patients were born between 1970 and 2011 and the diagnostic phase lasted three decades.

However, apart from the primary outcome “overall survival” and several operationalizations for the recording of the respiratory function, the study investigated no other outcomes on the basis of medical records. The patients included in the recording received both drug and non-drug supportive measures.

Inadequate processing of the study data

Processing of the study data in the manufacturer’s dossier is non-transparent and thus makes it difficult to derive a concrete added benefit. Thus, the proportion of patients with perinatal onset of disease remains unclear. Moreover, inconsistent, in some cases even contradictory information on the same data can be found at different points in the dossier. The fact that the manufacturer conducted no systematic search on the appropriate comparator therapy (best supportive care, BSC) without justification is scientifically questionable, because this approach might result in an incomplete study pool.

However, the effect on overall survival is at least so clear that it cannot be solely attributed to potential bias. For this reason, IQWiG researchers not only searched for additional relevant data on the appropriate comparator therapy for the population of infants with perinatal or infantile HPP, but also estimated the proportion of patients with perinatal onset of disease on the basis of information presented in the study documents.

Added benefit only for one group of patients

Overall, the differences between the comparator groups cannot be attributed solely to other confounders: More infants in whom the disease occurs before the age of 6 months survive under treatment with asfotase. However, due to the weak evidence the results are potentially biased, thus providing not more than a hint of a non-quantifiable added benefit of asfotase alfa versus the appropriate comparator therapy BSC in infants with perinatal or infantile hypophosphatasia.

As the manufacturer either submitted no data at all (for infants with disease onset from 6 months of age) or no suitable data (for children from 5 years of age, adolescents, adults with perinatal, infantile or juvenile disease onset) for the other patient groups in the approved therapeutic indication, an added benefit is not proven for these patients.

The conclusion of the benefit assessment follows the assessment of the Federal Joint Committee (G-BA) after approval in 2015: However, its demand for further evidence in order to ensure reliable, appropriate and economical care for those affected was not met.

Therefore, no added benefit can be derived for the majority of those affected (age group five years and older). The legally assumed added benefit for orphan drugs comes along with insufficient data also in this case. Like all other new active substances, orphan drugs should therefore be subject to an early benefit assessment already at the time of market access.

The small randomized controlled trial (RCT) on the age group of 13 years and older presented by the manufacturer cannot be used for this dossier assessment due to lacking compliance with the approval. However, it shows once again that RCTs can also be conducted for the assessment of rare diseases. With an adequate dosage and more study participants, it would probably have been possible to achieve a more reliable result on the added benefit and thus for health care—because in Germany alone, there are potentially about 1000 patients with HPP among those with statutory health insurance.

G-BA decides on the extent of added benefit

Allscripts to showcase move to human-centered design at HIMSS20

Coronavirus latest: Should you wear a face mask if you leave the UK to prevent the virus?
Recent Posts