Home » Health News » As Districts Insist on Vaccines, Some Teachers Push Back 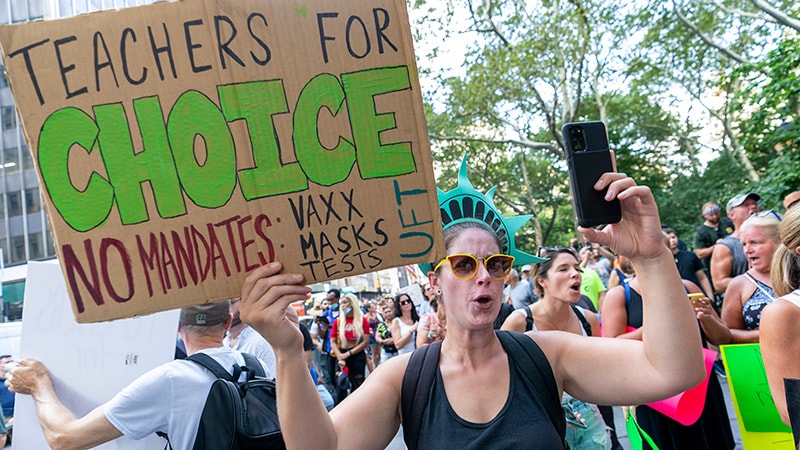 As Districts Insist on Vaccines, Some Teachers Push Back

PORTLAND, Oregon (AP) — Some of the biggest school systems in the US are taking a hard line with teachers and staff members who are not yet vaccinated against COVID-19: Get a jab or lose your job.

Most teachers already are vaccinated, and national teachers’ unions have endorsed vaccine mandates, but the policies have sparked protests from educators and, in some cases, pushback from local district leaders who fear large numbers of departures.

In Oregon, where school staffers statewide are required to be fully vaccinated by Oct. 18, the board for the 7,500-student district of Redmond last week passed a resolution protesting the mandate and mandatory mask-wearing in schools after “significant” opposition.

“This could do serious damage to the other mandate that we have, which is to provide excellent education to the children and the families of our district,” board member Michael Summers said. “We’re attempting to speak for people.”

Teachers in many school districts with vaccine requirements can opt out as long as they submit to regular testing for the coronavirus, but New York City, Philadelphia, Chicago and St. Louis are among a growing list of places that are limiting exemptions to bona fide medical and religious reasons. Washington and Oregon have adopted similarly strict vaccination policies statewide.

As a new school year begins, governments are taking a harder line on vaccinations to ward off the highly contagious Delta variant, which has sent children to hospital intensive care beds in record numbers. Many students are too young to get the vaccine, which is available only to those 12 and over.

“This is to ensure that the children we all cherish are safe, that their families are reassured,” New York Mayor Bill de Blasio, a Democrat, said last week.

Underscoring the risks of classroom infections, the US Centers for Disease Control and Prevention presented a case study in its weekly report Friday detailing how an unvaccinated teacher in Marin County, California, spread the virus to 22 of the instructor’s 24 students at school. The CDC said the teacher sometimes read aloud to the students while unmasked.

Some school staff members who have held off on getting vaccinated say they would leave their jobs before taking the shots.

Marlene Washington, an elementary school teacher in New York City, said as she protested de Blasio’s order outside City Hall last week that she is considering retirement after two decades in the classroom. She said she questions the long-term safety of the vaccines.

“I’m still undecided about what to do,” said Washington, 62. “But I do know that I’m not taking the vaccine.”

Kiara Coleman, a food service worker for Philadelphia schools, said she isn’t budging despite uncertainty over the consequences of refusing a vaccine.

“I’ll just have to cross that bridge when I find out more details of the mandate. I would hate to throw away all that time I have with the schools,” said Coleman, who also has concerns about potential effects of vaccines.

Philadelphia parent Rebecca Smith, who has daughters in the third and sixth grades, said she should not have to worry about school employees making them sick.

“School employees are tasked with caring for some of the most vulnerable members of our society — our children under 12, who right now are the ONLY group who can not get a vaccine to protect themselves,” she said in written testimony to the school board.

While teachers unions including the United Federation of Teachers, which represents New York City teachers, have supported the no-opt out rules for vaccines, they also advocate on behalf of dissenting members in negotiations with the city. Some of those talks focus on severance packages for those who leave their jobs and leaves of absences that could allow some teachers to return once the public health crisis passes.

“We will represent them and we will protect their interests. But there is a deep disagreement here,” said Randi Weingarten, the president of the American Federation of Teachers, the parent organization of the New York City teachers union.

“At the end of the day, employers have the right to impose these kinds of vaccination policies and they will do that,” she said.

At least 72% of the 75,000 public school teachers in New York City have gotten at least one shot of a vaccine.

Protestors gathered in Olympia, Washington, when Gov. Jay Inslee, a Democrat, announced teachers would have until Oct. 18 to be fully vaccinated or face firing. A protest on Saturday attracted hundreds of state employees, from ferry workers to teachers, who rallied against the vaccine mandate.

About 700 teachers have contacted the Freedom Foundation, a right-wing legal organization that has represented businesses cited for violating COVID-19 restrictions in Oregon and elsewhere.

“We’ve been telling everybody to make the school fire you,” said Jason Dudash, the group’s Oregon director. “Don’t quit. If they’re going to do this, make them do it.”

A 675-student district in central Oregon delayed the start of school three weeks until Sept. 20 to deal with the fallout from the vaccine mandate, Culver School District Superintendent Stefanie Garber said in a letter to families.

She said her district will comply but feels state officials are threatening unreasonable penalties, including the possible loss of a district’s liability insurance and the revocation of teachers’ licenses.

In another small, rural town, a district-sponsored vaccine clinic set up after Brown’s vaccine mandate attracted fewer than 10 teachers and there is concern about staffing if some decide to leave rather than get the shots, said Lebanon Community School District Superintendent Bo Yates.

Yates estimated that between 50% and 60% of the teachers and staff in his 4,000-student district are vaccinated. Several dozen teachers and their supporters protested the mandate when it was announced earlier this month.

“In a certain sense, I empathize with them because some of the people that are protesting have been our superstars during this COVID period. They’ve been the food service workers that have been feeding our community on a nonstop basis or our bus drivers,” Yates said. “But we’ve got to follow the mandates that we’re given or we’ll be swimming in this sea forever.”

In Redmond, Oregon, the school board resolution protesting the vaccine mandate passed on a 3-2 vote. The district will comply with the vaccine mandate as it fights to regain local control of decisions around mask-wearing and vaccines in schools, board members said.

One board member who voted against the resolution, Liz Goodrich, noted COVID-19 is surging in central Oregon and only 57% of eligible residents in Redmond are fully vaccinated.

“To me, local conditions are not good and we have heard over and over,” she said, “that the spike of this Delta variant is not done.”