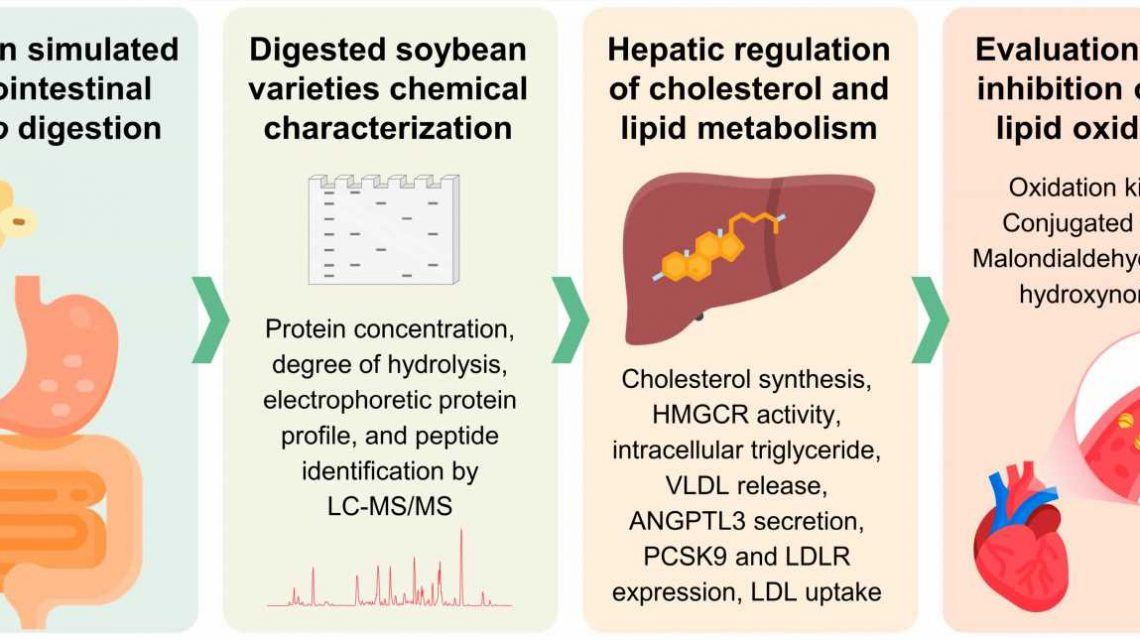 A protein in soybeans blocks the production of a liver enzyme involved in the metabolism of triglycerides and low-density lipoprotein, scientists found in a recent study.

Consuming soy flour rich in the protein B-conglycinin has the potential to reduce LDL cholesterol levels and lower the risk of metabolic diseases such as atherosclerosis and fatty liver disease, said Elvira de Mejia, a professor of food science and human nutrition at the University of Illinois Urbana-Champaign and the corresponding author of the study.

Published in the journal Antioxidants, the study was co-written by Neal A. Bringe, a food scientist with Benson Hill Company; and Miguel Rebollo Hernanz, who at the time of the research was a visiting scholar at the U. of I. Rebollo Hernanz is the first author of the paper.

Scientists have long known of soybeans’ cholesterol-lowering properties and lipid-regulating effects, and the current project investigated two soy proteins thought to be responsible for these outcomes—glycinin and B-conglycinin—and found the latter to be particularly significant.

“As we hypothesized, soybeans’ effects on cholesterol metabolism are not only associated with their protein concentrations and composition but also with the peptides embedded in them that are released during gastrointestinal digestion,” de Mejia said.

The team defatted and ground into flour 19 soybean varieties, each of which contained differing proportions of the two proteins. The proportion of glycinin in these varieties ranged from 22%-60% while the B-conglycinin ratio ranged from 22%-52%.

Using a simulation of the human digestive process validated by other studies, the team sequentially mixed the defatted soybean flours with various fluids and enzymes to mimic the oral, gastric, intestinal and colonic phases of digestion, de Mejia said.

They identified 13 bioactive peptides produced during digestion, most of which came from glycinin and B-conglycinin, according to the study.

In testing the digested materials’ capacity to inhibit the activity of HMGCR, a protein that controls the rate of cholesterol synthesis, the researchers found that their inhibitory properties were 2-to-7 times less potent than simvastatin, a popular drug used to treat high LDL cholesterol and fat levels in the blood that was used as a control in the study.

After classifying the soybean varieties by their glycinin and B-conglycinin composition and their HMGCR inhibitory properties, the team selected five varieties for further analysis.

“We started with cells that were already exposed to fatty acids to mimic fatty liver disease and tried to understand the role of the digested soy proteins,” de Mejia said.

“We measured several parameters associated with cholesterol and lipid metabolism and various other markers—proteins and enzymes—that positively or negatively affect lipid metabolism.”

These markers included HMGCR and angiopoietin-like 3, a protein secreted primarily by the liver that is a critical modulator of lipid metabolism, de Mejia said.

ANGPTL3 inhibits the enzymes involved in the metabolism of triglycerides, LDL cholesterol and high-density lipoprotein cholesterol, which is sometimes called “good cholesterol” in contrast to LDL’s reputation as “bad cholesterol.” Both HMGCR and ANGPTL3 are overexpressed in fatty liver disease, according to the study.

Secretion of ANGPTL3 more than tripled after the liver cells were exposed to the fatty acids, de Mejia said. However, the team found that peptides from three of the digested soybean varieties reduced ANGPTL3 secretion by 41%-81% in correlation with their glycinin and B-conglycinin ratios.

Although the fatty acids reduced the liver cells’ absorption of LDL cholesterol by more than one-third, the soybean digests reversed this by inhibiting the expression of a protein. The digests increased the cells’ uptake of LDL by 25%-92%, depending on the soybean variety and its glycinin and B-conglycinin proportions.

“One of the key risk factors of atherosclerosis is oxidized LDL cholesterol; therefore, we investigated the preventive effects of the soybean digests at eight different concentrations,” de Mejia said. “Each of them reduced the LDL oxidation rate in a dose-dependent manner, inhibiting the formation of both early and late oxidation products associated with the disease.”

Greater concentrations of B-conglycinin in the digests correlated with larger reductions in oxidized LDL, esterified cholesterol, triglycerides and HMGCR levels in plasma, the team found.

“The digested soybeans’ peptides were able to reduce lipid accumulation by 50%-70%, and that’s very important,” de Mejia said. “That was comparable to the statin, which reduced it by 60%. We also clearly saw different markers that were influenced by key enzymes that regulate hepatic lipogenesis—the development of a fatty liver.”

ANGPTL3 is an important marker, since its circulating levels are associated with relatively high hepatic impairment and inflammation, de Mejia said. “Our role as food scientists is to find bioactive compounds that could regulate this in plasma. It’s easy to measure to prevent hyperlipidemia and atherosclerosis.”